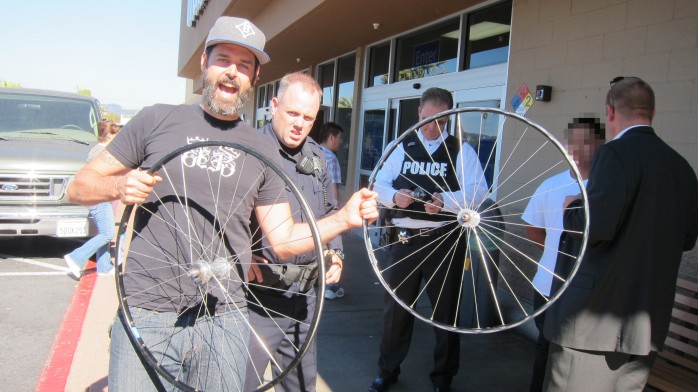 Steal from me once, shame on you. Steal from me twice, shame on…well, I’d like to say you – meaning you soulless, amoral bike thieves out there – but by not securely locking up the wheels on my Hunter track bike, I enabled some thief to act upon his criminal impulses.

I dropped by Pedalfest last weekend en route to a work-related event. It was a beautiful, sunny Saturday afternoon and Jack London Square was filled with tons of people and hundreds of bicycles were locked to every spare sign post and rail in sight. I managed to find an empty space at a rack right near Broadway and First Street by the parking lot, then made my way to the festivities.

But here’s what I did wrong – and please, learn from my mistakes:

MISTAKE #1: I should have looked for the free valet parking that was offered by Pedalfest. But since I wasn’t planning on staying long, and it was broad daylight with hundreds of people around, I figured my bicycle would be watched by “the crowd”. Surely someone would say or do something if they saw an individual removing two wheels from a bicycle? If one’s thing’s for certain, people aren’t paying attention – it was, after all, a big fun event with a Whiskeydrome and BMX stunts – or they’re too scared to get involved or just don’t give a shit.

PRO TIP: Use free bike parking if it’s offered at a public event.

MISTAKE #2: At one point I decided to stay a little longer, and I thought, “Maybe I should check on my bike. Or walk around with it. Or move it to bike parking. Nah, it’ll be ok.”  Why did I ignore the little paranoid voice that was nagging me inside my head? Did living in the bike theft capital of the world, New York City, and having multiple bikes stolen there teach me nothing? And didn’t I just recently recover my stolen mountain bike? Insert a big face palm here. But the worst part of this situation was that I hadn’t locked up my wheels – only my frame – so they were two tasty pieces of bait waiting for the bike thief sharks to come and snatch them up.

PRO TIP: Lock up your bicycle properly or risk feeling like a total ass afterwards.

Once I discovered my wheels were stolen, there wasn’t any time to feel sorry for myself. I immediately filed a police report online and spread the word on all of my social media networks. I also set up multiple alerts on Craigslist using IFTTT.com and additional ones on eBay. I posted on SFFixed.com, the cycling forum I help to moderate. I didn’t register it on stolenbicycleregistry.com, but it’s a great, free helpful database that you should use if you ever have the misfortunate of having your bike stolen.

PRO TIP: IFTTT.com’s motto is “Put the internet to work for you.”If you have your bicycle or components stolen, let the world know. And USE THESE ALERTS! If you’re lucky, the thief will be dumb enough to try and sell your stuff online.

I also went to the Laney College flea market on Sunday to see if I could spot my wheels. While I didn’t find my wheelset, I did see quite a few bikes that appeared to be stolen. I took photos of every bicycle I saw and created a Flickr group to be used as a visual database for folks in the Bay Area.

PRO TIP: Be sure to visit your local flea markets to see if your stolen merchandise is there. That’s where my mountain bike was recovered and many items end up circulating through the hands of unscrupulous vendors.

But as luck would have it – and I consider myself extremely lucky that they were listed online – my wheels turned up on Craigslist a week later: last night, in fact. They’re fairly unique and distinctive, which worked in my favor. My Hunter is built with mostly American-made components, and the Sun Mistral rims of my wheelset were among the last made in the late ’90’s in Indianapolis until they started producing them overseas. My brake had worn down the black rim as they weren’t machined, and they had silver, low-flange track hubs that were radially laced in the front. As soon as I saw the photos, I knew they were my wheels.

I first heard from my friends @alexstar and @longhornsteve on Twitter. “CHECK CRAIGSLIST IMMEDIATELY!” they tweeted. While The Bearded One texted the “seller” in San Leandro (who I’ll refer to as ‘Texter’ from this point on since he insisted on no phone calls), I received an email alert from IFTTT.com about a half-hour later. I also received messages from concerned members on SFFixed.com who had also seen the listing. TBO exchanged banter with Texter about the wheelset, then arranged to meet him at the San Leandro BART station at 4:30PM today.

I wondered whether Texter could be arrested for possession of stolen property, even if he claimed that he was unaware the wheels were stolen. I crowdsourced answers via social media, and it seemed that while he could be arrested, the case probably wouldn’t stick without proof of his intent. But a Google search of his phone number yielded that he did seem to run a brisk trade in bicycle components. Perhaps I could convince the police to investigate further with this info.

I called the Oakland Police Department and they said it was out of their jurisdiction (which actually wasn’t true, since the crime was committed in Oakland). They told me to call the San Leandro Police Department when I was a ‘block or two away from the BART station’ to see if they would intervene, which to me seemed like a waste of time.

But we had another stroke of luck: TBO has a friend who’s with the San Francisco Police Department and is also a cyclist (I’ll refer to him as Officer Dura-Ace.) Having friends in the police force who are also cyclists is supremely helpful.

PRO TIP: Befriend every cycling cop you see pedaling around the city because they’re just as invested in our beloved pastime as we are, and they will get shit done when a call to your local precinct will not.

Officer DA happened to be off-duty today. Not only did he volunteer to accompany us to our meeting, but he also called up another cycling cop who worked in San Leandro that he rides with on occasion. That police officer called in a favor to his sargeant who oversees the burglary department and asked if he would help us out. The sargeant agreed and we had the police working on our case! (I’ll refer to him as Sargeant Schwinn.)

This afternoon TBO confirmed the meeting via text. Texter later asked to change time from 4:30PM to 3:45PM. Texter wrote back one more time to change the meeting spot to a Wal-Mart in San Leandro.

When Officer Dura-Ace came by our home to drive us over to meet with Sargeant Schwinn and his team, I learned that a mini sting-operation was being organized. TBO and I didn’t have to be involved at all – for our own safety, it turns out. Sargeant Schwinn would pose as TBO and use his phone to coordinate the exact meeting spot in front of the store. We’d be protected in the event that Texter pulled a gun and attempted a robbery.

The plan was to wait until Texter walked up with the wheels. Then Sargeant Schwinn would use a secret signal to alert his police officers to move in and make the arrest. Given all of the evidence I had given them – extensive photos, police report – they had enough cause to arrest him for possession of stolen property. This photo shows the plan they had drawn out on a white board. (Here’s where I felt like I had been teleported into a real-life episode of Breaking Bad.) Another officer had run the cell phone number and it came up as belonging to a 70-year-old man. “It’s probably some dude living in the basement of his parents’ house,” they joked.

I have to admit I was little skeptical of Sargeant Schwinn’s wardrobe. I asked what he’d be wearing to the meeting, and he replied, “Oh, what I’m wearing now.” Since he was dressed in business casual – “I’ll say I’m a banker,” – I was a bit nervous that Texter would be suspicious of this preppy guy interested in a set of track wheels. But it was brave of him to just go in posing as the buyer. I’m not sure if he was armed and he certainly wasn’t wearing a bullet-proof vest like his colleagues.

We all set out at 3:30PM, and Officer DA, TBO and I waited at a separate parking lot across the street. Time seemed to move slowly and I could barely sit still in the car. Was he going to show up? The police officers warned that sometimes these meetings dragged out over days. The sellers could be flaky and unreliable. Sargeant Schwinn was willing to give Texter until 5:00PM to show up or he’d arrange a meeting for tomorrow.

But just after 4:00PM, we received the happy phone call from Sargeant Schwinn that Texter had been apprehended. Here’s the text message exchange between Texter and the Sgt. just prior to the arrest. We drove over and saw a small group of cops flanking a 17-year-old teenager who had his hands cuffed behind his back. Apparently he had traded a bike frame for my wheels and a pile of other bike parts with some guy he had met earlier at the BART station. Then Texter was planning on flipping his newly acquired stash for cash. He was an enterprising teenager, but sadly, he didn’t even have a car yet. His mom had brought him to Wal-Mart and as we were pulling away, the cops were informing her of everything that went down.

Sargeant Schwinn said later back at the station that given the circumstances, chances were slim that Texter would go to jail. He was going to gather up all of the evidence and refer it back to Oakland PD. “Hopefully they’ll pursue the case, but honestly – they’re dealing with a lot that I’m glad I don’t have to deal with.” So who knows if the original bike thief will ever be caught. Most importantly, though – I have my wheels back! I’ll be back in the USA bike saddle again soon.

Once again, I can’t thank everyone enough who helped me in the recovery process and sent me good wishes this past week. If you ever have your bicycle stolen, please feel free to message me. I’m happy to do what I can to help. And please share this story far and wide with your fellow cyclists to let the bike thieves know that they cannot win!

P.S. I plan to lock up all of my bikes like Fort Knox in the future.

UPDATE: While I originally shared a photo of Texter getting arrested online, per his request I decided to blur out his face in my blog photos. He found his story on my website and texted TBO later this evening. While I don’t think he’s totally innocent in this whole situation, I don’t think he’s the thief – and he doesn’t want the whole world to assume that he is one either. Texter apologized and offered up info about the guy he allegedly bought my wheels from. Sargeant Schwinn also let us know that he’ll be following up on this case personally instead of routing it back to Oakland PD. In any case, he’s still a kid – so I’m hoping he’s more mindful of his business dealings in the future and stays away from shady characters on Craigslist. I’m sure his mom probably grounded him for the next few years, too.