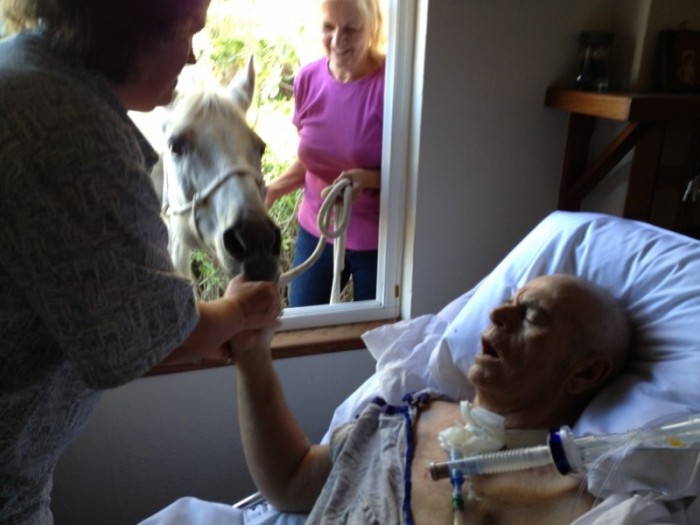 At 5:45PM today, my dear father-in-law, Jay Hatfield, passed away from complications due to lung cancer. He was 61 years old.

Over the past few weeks, Jay’s health had been steadily declining. He was too fragile to withstand more chemotherapy and radiation treatments, and the location of the tumor made it impossible to operate. Bedridden, medicated, hooked up to countless machines and unable to speak — it wasn’t what Jay wanted for himself. He wanted to go home. He’d smile bravely when we came to visit and say he wasn’t depressed — not that our stoic cowboy would ever tell us if he were — but we knew he didn’t want his last days to be in the sterile environment of an ICU.

Yesterday afternoon, a local hospice organization transported Jay back to the home he shared with his wife Sue in Aromas. They set up his bed in the living room by the window, and everyone could see that he was happy to be out of the hospital and surrounded once again by the familiar comforts of their place. His sister Marsha brought his favorite horse, Goblin, around the side of the house and up to the window. The hospice nurse, Cynthia, held up Jay’s hand so Goblin could say hello to his old friend. Then Jay slept for most of the day, sedated on medication to relieve his pain. Cynthia left at midnight, and Shawn kept vigil by his bedside and attended to his father until morning.

Shawn and his stepmother Sue were sitting beside Jay in the early evening when she said, “I wish Jay would say something.” At that moment, Jay opened his eyes for the first time since yesterday. His gaze was steady and strong, fixed in a piercing stare upwards. Jay’s breathing became slower and more labored until he fell silent. The gray cowboy tipped his hat to his loved ones and ventured up into the sky.

There have been many tears today and there will be many more over the next months and years. But through the tears will be the memories of his wry smile, his fiery temper, his gentle kindness and his abiding love for his friends, family and community. Thank you for your warm spirit, Jay, and may you rest in peace at last.