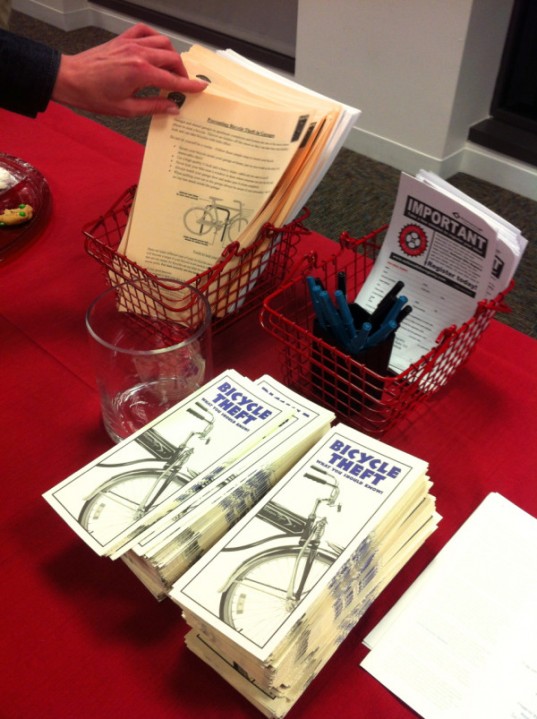 The San Francisco Police Department hosted a bicycle theft prevention workshop at Google’s San Francisco offices tonight. Only 20 people came to their first workshop last year, but due to popular demand, they had a nearly full house in attendance for this evening’s session. Marc Caswell, the San Francisco Bicycle Coalition’s Program Manager, led the proceedings and asked, “How many of you have had a bicycle stolen?” Nearly everyone in the crowd raised their hand. “How many of you have gotten it back?” Sadly, only one or two folks raised their hands in response.

SFPD’s Inspector Steven Pomatto (steven.pomatto at sfgov dot org) oversees many of the stolen bike theft cases that are reported to Mission Station despite the fact he’s not a cyclist. “I don’t even really like riding bicycles,” he jokingly admitted to the group. But he’s still dedicated to rooting out cycling-related crime in the Mission, which has a rampant bike theft problem.

After his first successful case — reuniting a stolen bike recovered in the Mission with its owner in Lake Tahoe (for which he was sent a cake as a thank-you gift) — he’s developed a passion for recovering bikes through the years. Unfortunately, while there have been some happy recovery stories, the overall success rate is low: it’s usually between 5-10%.

On Average, 720 Bicycles Are Stolen From The Mission Every Year

Over 60 stolen bicycles are reported stolen in the Mission every month, and it’s more than the neighborhood police department can handle on an ongoing basis. Insp. Pomatto gave a run-down on how they prioritize the flood of cases that land on their desks:

Inspector Pomatto also described what happens to a stolen bicycle once it’s been taken from its owner: it’s usually sold elsewhere like a flea market in Oakland, Danville, Roseville, Sebastopol and American Canyon. Or it could be sold on Craigslist or eBay.

He also asked victims to please file a police report even if it’s not eventually used to recover stolen property. The reports help to create a statistical picture of where and how often thefts occur for the SFPD. They share this info with the San Francisco Bicycle Coalition and assist with their efforts to spread awareness about thefts.

Insp. Pomatto recited a list of current hot spots for theft around the city: the Mission, the Japanese tea gardens in Golden Gate Park, the 16 and 24th Street BART stations, the Haight and the area around City Hall. Other tips he offered for securing bicycles included:

Another speaker, Furlishous Wyatt of SF SAFE, talked specifically about preventing bike thefts in multiple-dwelling buildings such as condos and apartments:

The SFBC is also in the process of creating better documentation for landlords and building managers to better secure their properties on behalf of their residents.

“A Thief’s Worst Enemies Are Time, Light and Noise” Paulie from Valencia Cyclery demonstrated one method of securing a bicycle to a parking meter or pole with a U-lock and cable. (His demo bike was a stolen Cannondale that the SFPD had recovered from a thief; is anyone missing it? They’ve been trying to find the owner for months.) He locked a small U-lock around the parking meter to the rear wheel of the bike. “If you have more room, secure the frame as well,” Paulie advised. But he recommended securing the back wheel instead of the front wheel with the lock, since it’s typically the most expensive part of the bicycle (be sure to lock within the parameters of the bicycle’s rear triangle). Then he looped a cable through the front wheel and U-lock. He also suggested using pitlocks for added security, as well as seat leashes for saddles. Insp. Pomatto remarked that Brooks saddles are one of the most commonly stolen items that are reported, but nearly impossible to track down.

Mission, Park and Ingleside Police Stations are all actively working to crack down on bike theft. They’ve set up stings to catch Craigslist thieves in the past, planted a GPS-enabled “bait bike” in from of the De Young Museum in Golden Gate Park (which seemingly helped to deter some bike thieves due to the subsequent publicity) and have prosecuted thieves who have confessed to their crimes. SF SAFE is in the process of getting a city-wide bicycle registration program implemented based on Ingleside’s successful model. (Morgan St. Clair can be contacted at morgan at sfsafe dot org by anyone interested in helping out with its development or would like to implement a neighborhood watch.) In the meantime, SFPD recommends registering bicycles with the National Bike Registry. (And use the excellent free online resource Stolen Bicycle Registry if you are a victim of a theft).

Towards the end of the workshop, I asked whether the SFBC or the SFPD had ever asked Craigslist or eBay whether they’d consider selling only bicycles listed with serial numbers. Officer Matt Friedman of Mission Station replied that he had made this suggestion to these companies and had also asked them and flea markets to stop selling bicycles altogether. He said his queries fell on deaf ears. “Just one guy can’t make a difference.”

I’m hoping with the combined efforts of the SFPD, SFBC and SF SAFE — along with input and involvement from the Bay Area community – we can continue to chip away at the bike theft problem.