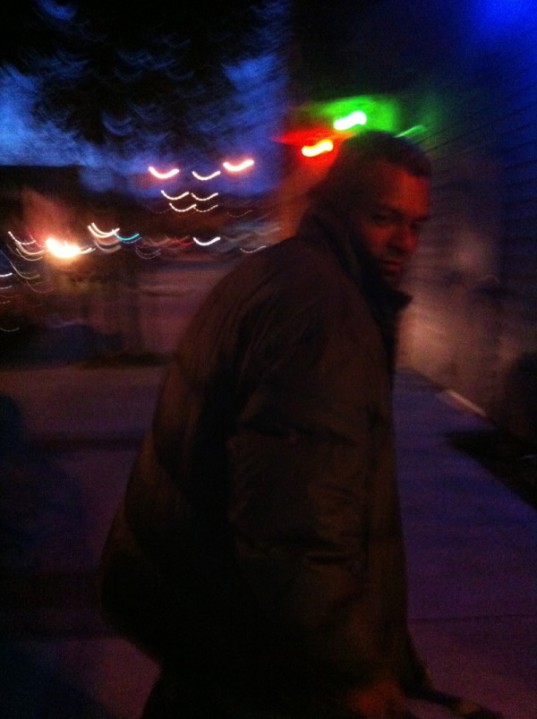 Shortly before 6:30PM tonight, The Bearded One met me at KQED so we could ride an after work Friday night city loop. Just as we were making our way through the Mission on 23rd and Harrison, TBO saw a man crouched down by a bicycle out of the corner of his eye. Then he heard a loud cracking sound, so he immediately swerved onto the sidewalk to see what was happening. The guy had a pair of bolt cutters and was attempting to cut through the u-lock of a light gray Miyata that was locked to a street sign.

“Is that your bike?” TBO asked the thief.

I whipped out my phone and started to take photos of him. You can see the silhouette of the bolt cutters in his hand as he’s threatening us.

The thief started to back away from us and the bicycle, but began issuing idle threats as he made his way down the street.

“I know where you live,” he said, trying to sound as menacing as possible.

After he disappeared, we inspected the u-lock. There didn’t seem to be any damage, so he must have just started his shady little operation right when we encountered him. We lingered for 10 minutes just in case he was foolish enough to come back a second time, and I started to spread the word on social media as TBO called the police and texted a friend in SFPD. They promised to share the info with the cops in the area. (We actually saw a police car drive by, but they had their sirens on and were en route to some other situation.)

As the Miyata was parked in front of an apartment building, we asked every single resident entering and exiting the building if they happened to know the owner of the bicycle. No luck. Neither of us had a pen or any paper to leave a note with the bike, so we left shortly thereafter — hoping that it would remain safe upon the owner’s return. We hope this Miyata stayed safe and sound!

This was the first time that either of us had actually confronted a bike thief during an attempted robbery. In retrospect, TBO said in the future he probably would follow a thief while calling the police. My natural instinct is to just run him or her off. Either way, it’s best to take the safest course of action in these situations; I’m glad no one was hurt and the thief was scared off.

If you ever see anything suspicious, please don’t hesitate to contact the authorities. Let’s keep our bicycles safe on the streets!