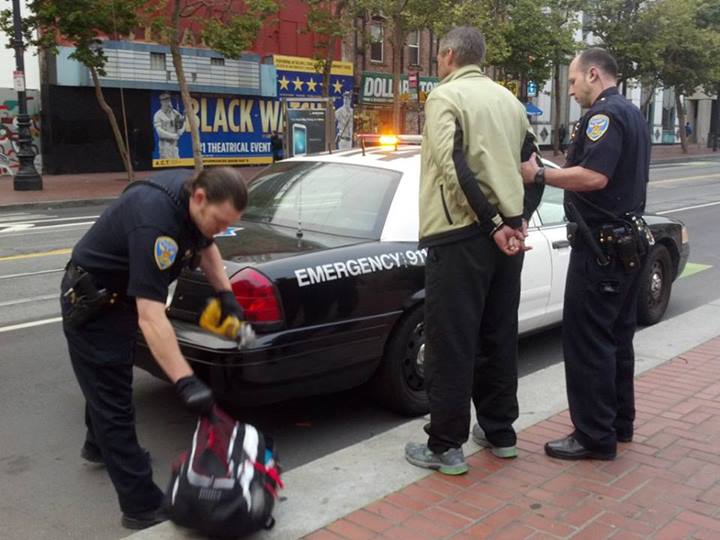 My friend MC helped facilitate the arrest of this alleged bike thief today. Here’s the background info — feel free to share it as we could use your help tracking down the owners of the two bikes in the following story and finding proof that this individual was involved.

“The other day, I saw a tweet at @sfpdbiketheft with a photo of this man cutting a U-lock with an angle grinder in broad daylight.

Tonight, while biking by Civic Center I saw a guy who I thought looked a lot like that on a black bike (front suspension, possibly Specialized, 2010 or later, but not sure). He said something to a Latino man in A’s baseball cap. He stopped, they chatted while the A’s cap guy examined the bike. Then the A’s cap guy opened his wallet and gave the white guy some money and took the bike and rode away. The guy instantly pulled out his phone and made a call.

While he hung around the plaza, I snapped a photo from a distance and kept a distance (for my safety) and I called 415-553-0123 and reported that, “I’m pretty sure I witnessed a guy who is an alleged bike thief just sell a bike.” The officers were on the scene in about 3 minutes, and I told them he was in the Carl’s Jr. They asked how I knew, and I showed them the photo from Twitter and my photo. I said “I bet he’s got burglary tools in the backpack.”

They stopped him and questioned him. He was very nervous. The police ran his name, found he’d had a few arrests for burglary, and lo and behold, a warrant for a traffic violation. This gave the officers enough to arrest him, and search his persons — including the backpack. And inside was the cordless angle grinder in the original photo.

But…it’s not over. Without proof he used it to steal bikes, as far as SFPD and we know, he was just taking a leisurely stroll with his pet angle grinder down Market Street.

So right now, he’s in jail for a traffic ticket and his angle grinder is property for 120 days — if he can prove he owns it. There will be no bike theft charges unless we can:

1) ID the type of bike in the photo for SFPD to search if there was a report filed AND/OR find the person who had that orange Cannondale Quick CX3 (?) stolen at Pine & Sansome on July 26th as photographed and have them file a report .

2) If someone had a black bike with a front fork stolen today around 6:00 PM and has video of this man using a grinder to steal it.

Otherwise, this dude is back on the street tomorrow (albeit he’ll have to buy new tools and can go for it again…)

Moral of the story:

When you see something, say something. If someone is cutting a U-lock or trying to steal a bike in San Francisco, snap a photo if you can and call 415-553-0123. Do not intervene for your own safety.

If s/he gets away, share it on social media and someone else may see something else that can help lead to the bigger picture. And, write down your serial numbers and report your bike stolen!!!”

UPDATE 8/13: Here’s a mug shot of the thief via @SFPDBikeTheft: