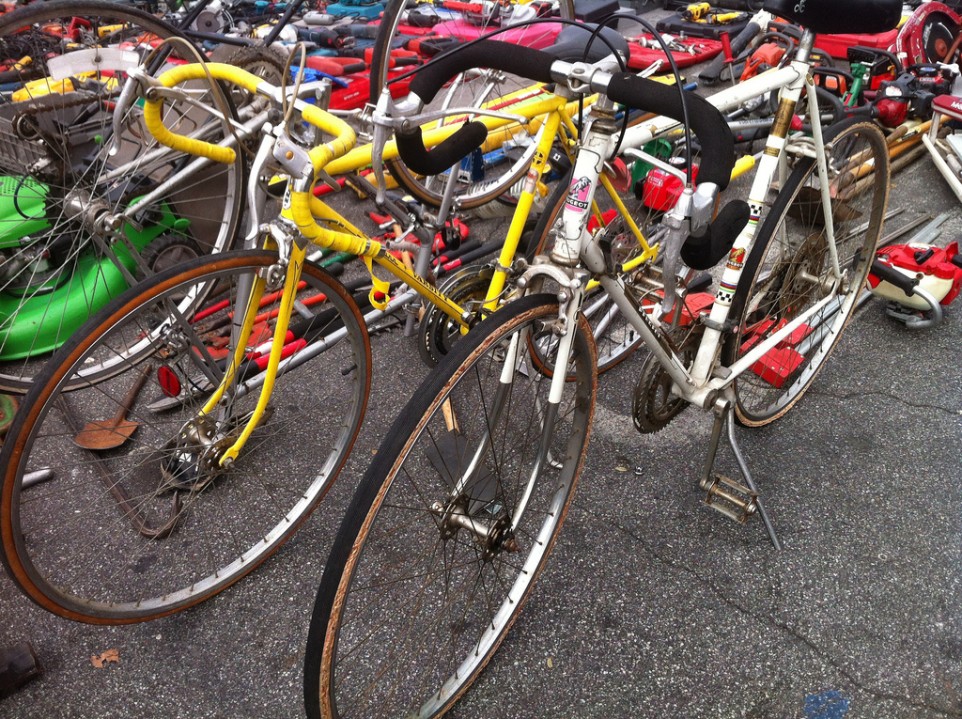 If we’re all forced to ride beaters, then the bike terrorists have won.

The above quote is a comment I made in a recent Google+ discussion in regards to an article about bike theft prevention. As we chatted about what to do about this ongoing problem, one commenter said that the write-up “missed the biggest [solution]: don’t have a bike that’s worth stealing. Or rather, don’t have the bike with the highest value-to-securely-locked ratio.”

This is certainly one approach to tackling this dilemma, but it’s definitely not my favorite by any means. When I lived in New York City, the bike theft capital of the world, I had 13 bikes stolen in 13 years. The first theft was the most painful. I was a freshman at NYU and had just acquired my most expensive purchase-to-date: a $300 Trek hybrid for commuting in the city. There was a security guard in the lobby and an indoor bike rack in the basement, so I felt it was safe to leave it there for several hours. Plus I was new to the city and hadn’t yet experienced the relentless ruthlessness of bike thieves in the Big Apple. I locked up my bike to the rack with a thin cable lock and headed off to class. When I returned an hour later, it was gone — and with it, my naïveté about the safety of my personal possessions had vanished as well.

From that point on, I rode mostly beaters for my remaining years in the city. It didn’t matter, however, how ugly or rusted they were or if they were wrapped in old tubes. I had a $30 bike stolen within 20 minutes in Greenwich Village when I went in for a job interview at a video store. Another one was locked with a thick, hardened steel Kryptonite chain — worth twice the cost of the bike — but the thief made off with my crappy bike anyway. And yet another was secured to the metal gates that surrounded the entrance of a police station in the West Village — that too disappeared. I realized that if the thief wanted my bike, he/she would take it if it was left outside. Leaving it unattended — even locked — was basically a death sentence for my bicycle.

I’ve now reached a point in my life where I can afford nicer bikes and don’t want to ride a bicycle that I’ve chosen merely because it’s a ‘deterrent’ — especially when it’s not guaranteed to always be successful in that role. And with the recent thefts and recoveries of my mountain bike and wheelset, it’s a problem that’s been on my mind quite a bit lately. I suppose I’ve finally reached my Howard Beale breaking point, where “I’m mad as hell and I’m not going to take it anymore!”

I’m definitely not alone in ruminating on this problem. One San Francisco writer never found his stolen Fuji touring bicycle, but the incident led him to research why it’s such a pervasive problem in the city. The Priceonomics blog explored the questions, “What is the economic incentive for bike thieves that underpins the pervasiveness of bike theft? Is this actually an efficient way for criminals to make money?” (The post also spawned a lively discussion here. And for some criminals, perhaps the answer is yes.)

So what are our options? I decided to conduct some of my own research and have compiled the following list of potential solutions that I’ve gleaned from articles, forums and company websites.

There are many bike registries available online, and The National Bike Registry (paid service) and Bikeregistry.com (free service) are two that seem to be the most popular. But I hadn’t heard of these sites until after I began my research, and I wonder how effective they really are. There appears to be quite a lot of controversy regarding bike registration with government entities, and inconsistent enforcement and participation subsequently results in an ineffective system.

What if bike owners were encouraged to register their bikes with their local cycling organizations (for example, the San Francisco Bike Coalition or the East Bay Bike Coalition)? Perhaps each yearly membership could include registration, and the organizations would be responsible for maintaining the database of serial numbers. The numbers could also be printed on their registration cards so they’d be easily accessible in members’ wallets. Groups could also have registration drives at events — such as “Bike To Work Day” — to encourage owners to become members and remind them to register their bikes. Individuals would see this as another benefit to their membership, and the organizations would be offering a useful service to their communities. But I think the main value would be in that it would give folks that extra nudge to document their serial numbers. Yes, people can certainly do this on their own. But how many people actually get around to thinking about their serial numbers until it’s too late? Far too many. If your local cycling advocacy groups are continually urging you to register and help you with the process, it may help procrastinators be more proactive with protecting their bikes.

Serial Numbers For Bicycle Listings on Craigslist and eBay

What if companies like Craigslist and eBay required every bicycle listing (frame or complete) to include a serial number? If it’s a custom build, then the seller could include the history of its acquisition. If there were any doubts, the framebuilder could possibly be contacted for verification.

RFID tags (radio frequency identification), smartphone apps and GPS devices have recently emerged as a possible deterrent to bike theft. SPYBike’s GPS system integrates under your headset’s topcap or within your tail light. It will send you a text message if it detects unauthorized movement once you’ve got it activated, then provide you with GPS data. The University of Wisconsin in Madison and this reality show use GPS-enabled devices to create ‘bait bikes’ to help deter thefts. Stolenbicycleregistry.com (a great, free online database you should use if you ever get your bike stolen, by the way) is an advocate of using RFID‘s. Kryptonite and Bike Shepherd recently partnered up to offer a similar service using QR coded-stickers and smartphone apps. These electronic ImmobiTags are used in the UK. The questions remain, however: how long can these innovations be effective before thieves catch on, and what if they’re not used widely by the public? Mass adoption is necessary in the case of tags, as with registries; otherwise, people will doubt their value, they won’t act as a deterrent and thus not worth the resources required to maintain such services.

Ideally, we could all have secure parking indoors near or at our workplaces, restaurants, stores and other places we frequent in our communities. Recent legislation passed this year took a step in the right direction for San Francisco, and BikeLink stations are quite popular and useful. Perhaps more of these BikeStations — like the one in Berkeley and other locations — are needed, even if they’re privately created by an entrepreneur.

One commenter on my blog suggested that a petition should be started to ban all sales of bicycles from flea markets. Local police are well aware that they are often the first places thieves will go to sell stolen goods. Should we pre-emptively prohibit the sale of bicycles at places like Laney College, Ashby and Coliseum flea markets?

One general consensus from the articles that I’ve read is that the police don’t have the resources, nor the interest, in pursuing bike theft. And as evidenced by the Priceonomics blog post, since the risk of getting caught or prosecuted for the crime is very low, the vicious cycle continues. Is there anyway to change this?

What can we do?

I’d love to hear your thoughts on what we as a community might be able to do to prevent bike theft. Since I’ve started publicizing my own efforts of recovering my stolen goods, I receive at least 1-3 emails a week from people asking me for help. But as I’m only one individual, I’m hoping that we can collectively come up with some solutions to this problem. While we won’t be able to eliminate it entirely, I’m looking forward to the day when there’s less stories about theft and more just about cycling.