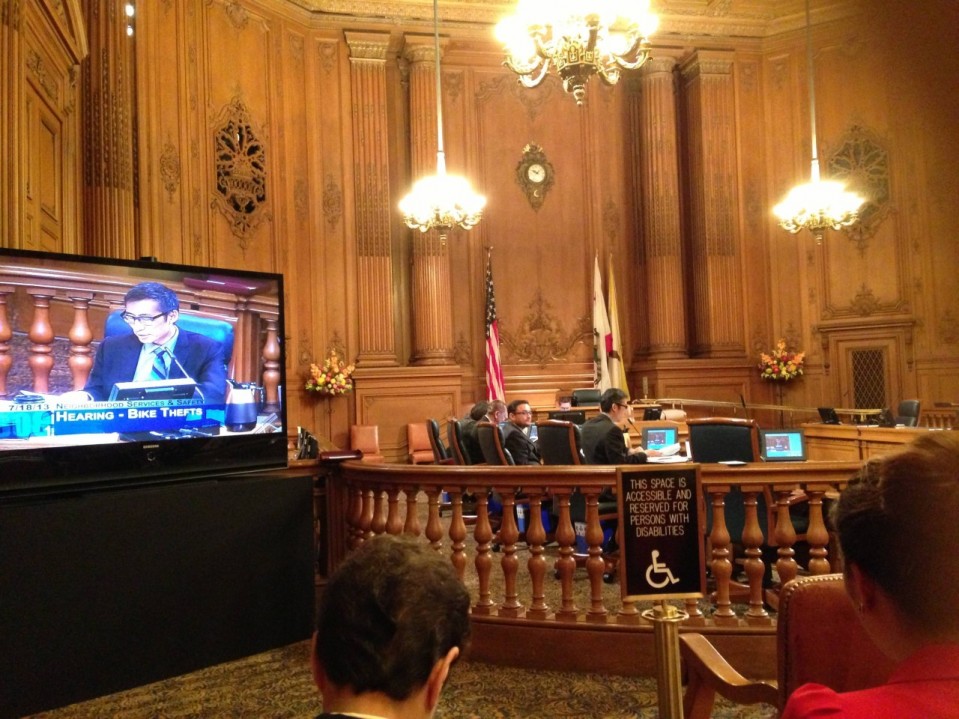 Local legislative wheels are in motion to crack down on bike theft in San Francisco. Supervisor Eric Mar called a special hearing at City Hall today with the Neighborhood Services & Safety Committee to discuss this ongoing problem in the city. As a victim himself — he’s had two bicycles stolen from his locked garage — Mar’s personally championing this issue and recommended $75,000 be added to Mayor Ed Lee’s proposed budget. The budget should be approved by August 1, then funds will be allocated to various city agencies and organizations to work on his proposed solutions.

After Mar gave an overview of the special report prepared by Fred Brousseau of Harvey Rose Associates (on behalf of the Board of Supervisors’ Office of the Budget & Legislative Analyst), Brousseau gave a short presentation that highlighted its main points. (Ironically enough, one of Mar’s aide, Peter Lauterborn, who had helped to pull together data for the report, had his bicycle stolen a week after it was published.) *Most bicycle thefts go unreported as “victims assume little can be done by police departments”.

*The San Francisco Police Department have returned only 142 of the 864 stolen bicycles recovered in 2012. “The low rate is primarily due to the inability of SFPD to reconnect bicycles to their owners”, who typically don’t have records of their bicycles’ serial numbers.

*864 bicycles that were recovered last year remain in a warehouse in Hunters’ Point; most owners don’t even know about its existence. Unclaimed bicycles are auctioned off or donated.

*SFPD has no central policy for addressing bicycle theft.

*The SF District Attorney’s Office has no data on bicycle theft cases that have been prosecuted since they don’t collect this caseload data separately.

*”Predictive policing” has had success in other cities. Crime trends are evaluated by neighborhood; Santa Cruz had a successful year-long pilot program that looked at where bike thefts were occurring, compared this data with other indicators (incidents such as drug dealing seemed to correlate with theft) to help increase arrests.

SFPD’s Officer Matthew Friedman, who’s been leading the charge to tackle bike theft in the city, stepped up to talk about what they’ve been doing thus far at Mission Station. “We’re already doing things that the report mentions — such as “bike bait” sting operations and educational workshops — but can we do more? Yes.” He stressed the importance of having a voluntary bicycle registry, alluding to the aforementioned point that many owners don’t have proof of ownership. SFPD’s Deputy Chief of Operations, John Loftus, praised Officer Friedman’s hard work — “We’re lucky to have him” — as he’s invested much of his own personal time and money towards outreach efforts. Loftus also supports a registration program that would be managed by SFSAFE, along with developing standard operating procedures that could be used by other stations throughout the city. While The Mission, Park and Ingleside have shown initiative with dealing with this problem, not all stations throughout the city have demonstrated similar interest. Loftus also mentioned that creating a special bike thief unit would have to be weighed against other priorities and whether it would be worth the expense. A bike thief was recently apprehended by SFPD during an attempt to steal a bicycle; in case you’re wondering what serious bike thieves carry with them when they’re ‘working’, here’s his arsenal of tools.

Neal Patel of SFMTA’s Livable Streets stated that one of their main goals was to increase bike parking for both short and long term usage. They plan to install 4-500 more sidewalk racks this year. In the past, they relied on grants to fund this initiative. But they’re hoping to move toward a “request-based” system where individuals or businesses request a rack. Then SFMTA could draw upon funds that have been designated for bike racks and install them more quickly. In September, they plan to release a strategy for bike parking at train stations and businesses. As some residents don’t have the space to lock up bicycles at home, they’re hoping to provide more opportunities in public areas. (And more legislation is underway for commercial buildings.)

San Francisco Bike Coalition’s Program Manager, Marc Caswell, noted that bike theft is a top concern of its membership. There are over 4,000 bike thefts a year, or three times as many than reported cell phone thefts in the city. Caswell then recounted a story where a potential customer declined to buy a high-end bicycle at a local shop because he “couldn’t afford to lose it.” He felt that three important tenets of urban planning   — education, engineering and education — would be instrumental to the success of cracking down on bike theft. Morgan St. Clair of SFSAFE reiterated the importance of a registry and educational workshops. She had collected numerous letters from local bike shops that supported this plan, saying that their general sentiment was, “It’s time for action.” Citizens and others supervisors concluded the hearing with their own stories of bike theft and general support for Supervisor Mar’s proposal:

*Analysis of bicycle theft data consistently conducted throughout the city

I’m looking forward to seeing what the next steps will be once the budget is approved next month.