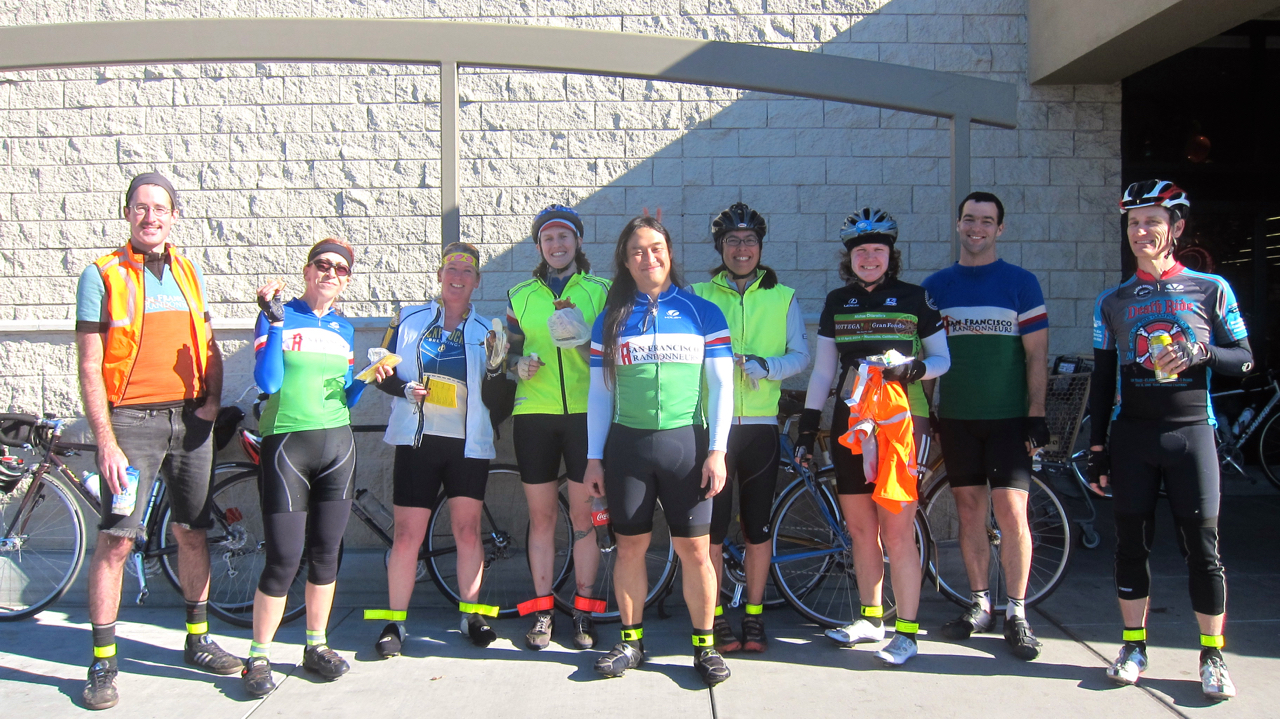 TBO says that we’ve done a workers’ ride together before, but for the life of me — I can’t remember when or which one it was. But yesterday’s ride was truly memorable; here are some of the highlights!

— A group of 10 happy randonneurs showed up at the ass-crack of dawn (6AM) to ride 188 miles: Ann, Bryan, Denise, Juliayn, Libby, Megan, Patrick, Pudu, Steffen and myself
— The glorious sunrise viewed from Sausalito
— Weather was perfect; not too warm, very little wind, sunny as can be
— We chose to ride semi-Audax-style; so while the group would splinter into sub-groups en route, we always reunited at designated spots
— The fog rising above Nicasio Reservoir
— Sushi for second breakfast at Petaluma’s Safeway
— Getting a sweet draft from the Patrick-Bryan train from Petaluma to Healdsburg
— Admiring the green meadows, post-rain — and the fruit trees are starting to bloom
— Discussing the development of a city limits sprint games with a points system with Patrick (Bryan won overall, with Patrick, Pudu and Megan contesting the other places; I was just happy to get 3rd place three times)
— While Pudu helped fix Libby’s flat, the rest of us received an informative history lesson from Megan on Luther Burbank (we stopped at the site of his historic horticultural experiments)
— We were sad to pass by the Russian River Brewery in Santa Rosa, but not sad to stand in the block-length line
— Sushi in Healdsburg (although it’s supermarket sushi, it still hits the spot.) And we bought a special surprise for Rob for our Marshall control…
— Riding through wine country made us thirsty, so Steffen made the brilliant suggestion of stopping at Stumptown Brewery and Patrick, Bryan and myself took him up on his offer. Here’s where we parted company with Libby, who decided to pack it in at the 90-mile point
— OCEAN VIEWS FROM HIGHWAY 1 — they never get old
— Due to my pace, I was in lone wolf-mode between Bodega Bay and Fairfax, behind the speedy group and usually in front of the others (although near Valley Ford, Juliayn’s tail light was my beacon in the distance to Tomales)
— Those Nicasio “bumps” after the reservoir don’t seem as bad as 2 years ago when I started randonneuring. Back in 2013 when I saw the sign that said, “Fairfax — 9 miles” before the climbs, I honestly thought I wasn’t going to make it. And now look at me — I can walk down the stairs successfully the next morning without pain!
— Snacks in Fairfax! We shared slices of hot pizza and I tootled over to 7-11 to bring back goodies for several folks in the group — including hot chocolate for a most appreciative Ann (in exchange for some sips–mmm, it really hit the spot as it was quite chilly at that point.) That pizza gave me newfound energy and although my legs were thrashed from chasing the speedy group all day — I felt pretty good despite being on the bike for 16+ hours at that point (as long as I didn’t have to do any climbing.)
— Marveled at the fact that Pudu has an endless supply of bad jokes and puns, even at hour 18. I guess I am henceforth known as, “Disapproving Turtle.”

But the real highlight of the day was Ann finishing her first 300k post-radiation treatment. So while she was still in pain, she determinedly soldiered on the entire ride. So very proud of her and her accomplishments — on and off the bike! She had the honor of pushing the button to open the nighttime gate on the Golden Gate Bridge.

Thanks to the group for a most spectacular day and I look forward to being the dork, I mean DORC, for the actual event.