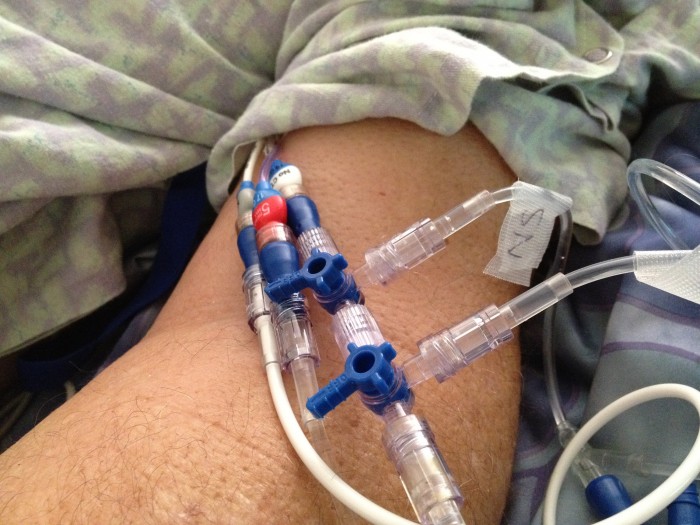 Jay was sleeping when I first walked into his hospital room this afternoon, so he was unaware that Shawn, Sue and I were all there. His brow was furrowed, as if he was uncomfortable and upset. Shawn sat down and gently massaged his left arm and hand, and the tense wrinkles in his forehead eventually began to relax, then melt away.

He was scheduled for some physical therapy, and the attending nurse turned off his medication so he’d be awake and lucid for his short exercise regimen. As Jay began to revive, I went over to his bedside to say hello. He surprised me by greeting me with a big, warm smile. During our previous visits, his face was often vacant, devoid of expression due to being in a hazy, medicated fog. But his smile lit up his entire face, and I saw the gray horse cowboy in that familiar grin.

His physical therapist arrived and she told him they were going to work on having him sit up for a minute or so. Jay’s eyes widened; no words were needed to express his dismay with the impending exercises. I glanced at Shawn, and I know he saw that anxious look as well. In the past few months, Shawn has become an expert at reading his father’s eyes or mouthed words to communicate with him. But he was stumped the other day when his dad whispered a request to him. “Are you trying to say the word ‘building’?” said Shawn. Jay shook his head. Shawn started pointing to letters of the alphabet on a notepad to see if his dad could help him spell out the word. The letter “M” garnered a nod, and he finally understood that his dad had been asking for a milkshake. Ah, of course — he should have known his dad was craving one of his favorite drinks.

Before the therapist showed up, Jay had already tried sitting up with Shawn’s help. Jay would hold Shawn’s hand and try to pull himself up away from the bed. Being bedridden had weakened him considerably, so even the smallest effort was tiring. And his arms were heavy and swollen with fluid, a side effect from the chemotherapy treatments. But he was able to lift both arms over his head much higher than the previous day. Yesterday, Jay could barely lift one arm off the covers, but he seemed restless and determined to do so. Shawn was unsure of what he wanted, but he propped up his dad’s arm on his own. Jay then reached up and proceeded to scratch his forehead. It was a reminder that it’s those little things that you take for granted, being able to scratch that one troublesome itch or easily move your pillow into the right place under your head just so.

As his therapist got him ready to sit up, I thought about all of the lifelines that were branching out of Jay’s body: one for food; one for medication; one to take away his waste; several to provide him with oxygen; countless others monitoring and maintaining his health. They had to move carefully to not disturb his network of lifelines. Healing is a delicate process and you have to move forward slowly with grace and deliberation.