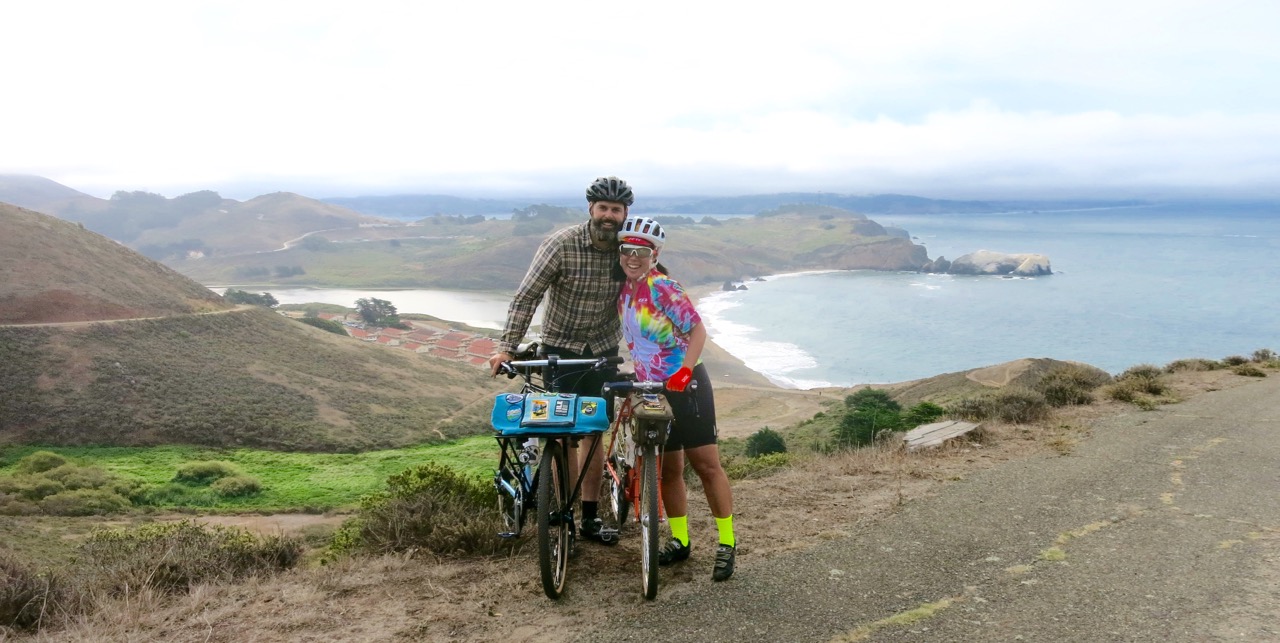 –About 70+ showed up for the dual-populaire rides (there was also a pavement-only option), but most folks chose the dirty route (as did we.)

–Patrick left smiley faces for me on the start / finish control sheets; ’twas nice to see those again!

–It was a cool, overcast day but we didn’t mind at all since it’s been upwards of 100 degrees in much of the Bay Area lately. It was quite a relief to take a break from the scorching heat.

–Besides, no sunshine was needed; I was rocking my new La Société Adrian Hands kit! I definitely earned plenty of stares from the roadies I encountered on the 65-mile-ish route. Go on, bask in my Day-Glo glow!

–Rode with lots of wonderful friends all throughout the day as we climbed through the Headlands and up Mt. Tam. TBO and I posed for a photo near Battery Townsley on the Coastal Trail; you can see Rodeo Beach in the background, which is where we had our bike nerd-hippie-beach wedding 6 years ago!

–Only sad moment: TBO got a pinch flat coming down from West Point Inn on Mt. Tam. After one broken tire lever and some moral support from Jorge — we managed to get his stubborn (but most excellent) SOMA Cazadero tire back on his rim.

–I thought the ride’s time limit was 7.5 hours (since I’d spotted that on the SFR website), but since our route was shorter than the Lucas Valley option — we actually got less time (should have read my cue sheet more closely.) Jorge casually mentioned to us that we only had 7 minutes to finish just after we’d descended the Golden Gate Bridge. And wouldn’t you know — we finished right at the cut-off point at 14:52! I think it was poetic destiny that I “Adrian Hands’ed” the first brevet that I wore my new kit.

–And then I got to christen my RUSA cup by filling it with tasty beer and toasted Patrick, Pudu, Steve, Tom and Roland (who was sadly missing from this photo. Bringing your cups to populaires is a time-honored SFR tradition.) These guys totally inspired and supported my journey towards earning this award — if not for them, I certainly wouldn’t have it (and I wouldn’t have gone to PBP either!)

–Then we proceeded to feast on ham and cheese crepes, Nutella, stinky cheese, pumpkin soup and all of the French-themed food (as a nod to Paris-Brest-Paris) that Kimber had prepared for us. She did a stellar job, as always (and her adorable daughter would periodically check on us and ask if we needed anything.) Thanks to Carlos (the route designer) and RBA Rob and of course, all of the volunteers who helped make today a fantastic day!