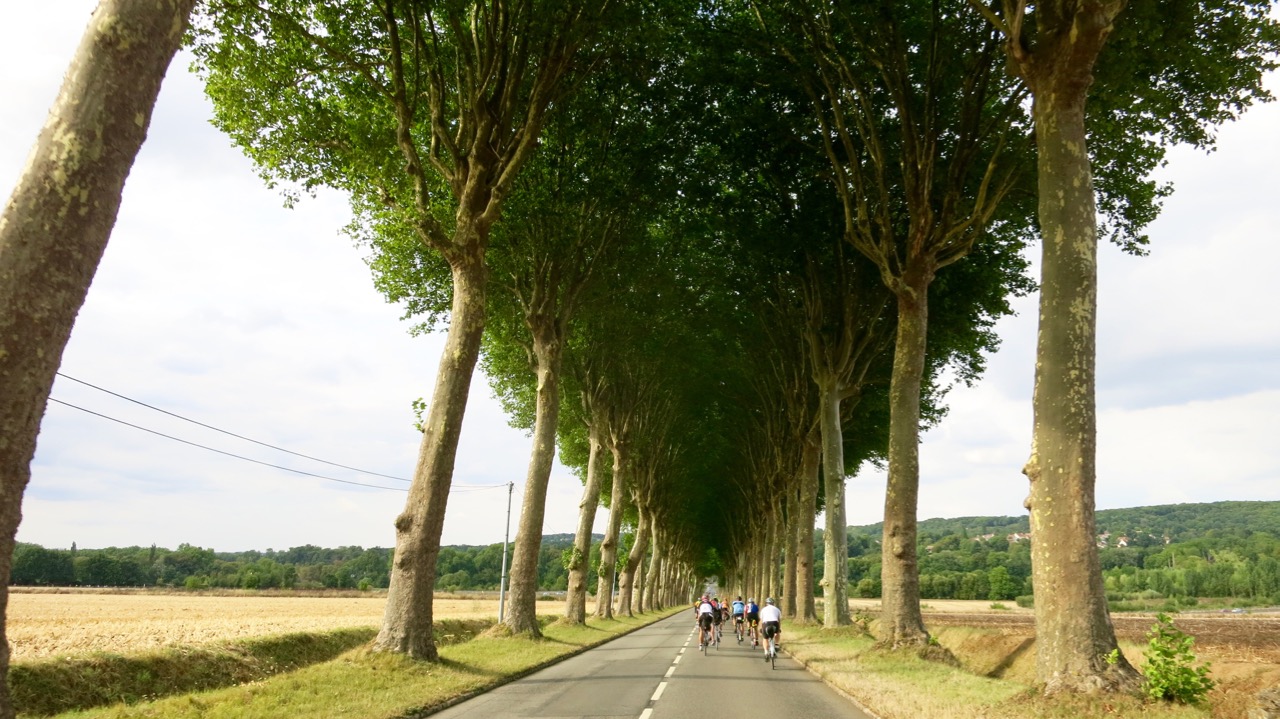 In the early hours of a Sunday afternoon in August, 300 or so of us randonneurs in the 5:30PM “G” group left the suburban confines and cheering crowds of St. Quentin-en-Yvelines bound for Brest. The nondescript tracts of concrete buildings soon gave way to the rolling terrain of countryside. I’d read in the event literature that the route used to be flatter, but the organizers had diverted it to quieter, rural roads with less traffic (due to some unfortunate fatalities on busier thoroughfares) and thus added more hills to the overall route. While there’s no terribly steep, mountainous climbs on Paris-Brest-Paris, there’s hardly any flatlands to rest your weary legs, either. It’s a relentless up-and-down course with some long ascents near the western coast; it’s a deceptively fatiguing route as you accumulate close to 36,000 ft. of elevation gain overall by the time you return to the start.

About 10 miles from the velodrome, we passed through a tunnel of tall sycamore trees that loomed over the road. Now we’d entered the gateway to another realm and teleported back into time to a tranquil countryside dotted with a charming succession of stone villages, castles and patches of cobblestoned streets. With overcast skies but no threat of rain, we were able to travel peacefully through the summer evening past the fields of wheat, corn and lush green meadows pockmarked with hay bales. My riding group and I even had a lovely encounter with a husband-and-wife walking their cows down a narrow road, guiding them gently along with just a walking stick. And as we crossed over to the northwest region of Brittany, or Bretagne, signs began appearing in both English and the ancient Breton language with Celtic origins. I wasn’t able to truly capture the experience of riding at night with my small point-and-shoot camera. If I’d had a tripod and a more robust set-up, it would have wonderful to properly document the endless stream of red tail lights that twinkled off into the horizon.


Aside from the Pont de l’Iroise at Brest, Roc’h Trevezel was another stunning highlight of PBP for me. A gradual two-mile climb that’s the highest peak en route, we reached it just at sunrise on our second day. It was a breathtaking vista, with the valley aglow with pastel tints of pink and orange light. The luminous packs of riders in their bright yellow fluorescent vests and sparkling headlights ascended in the soft morning mist. And we happily zoomed down from the summit, flattening our bodies against our bicycles so we could go as fast as possible, and relishing this hard-won reward for our efforts.


There were some glorious, postcard-perfect sunsets during Paris-Brest-Paris. And as the course was so well-marked by signs with reflective arrows, I didn’t need to squint at my cue sheet at night. One did have to keep a vigilant eye out for these reliable markers, which were sometimes hard to spot. There were a few missed turns here and there, but we were always able to backtrack quite easily. (I later heard that some riders had trouble towards the end of the ride when some had of the signs had disappeared; they’d been snatched up by eager souvenir seekers. I managed to find a stray sign at the Brest control, but with no way to carry it back, passed it along to my friend Ian.) Most of the time, however, I could relax and just appreciate the scenery and the stars.