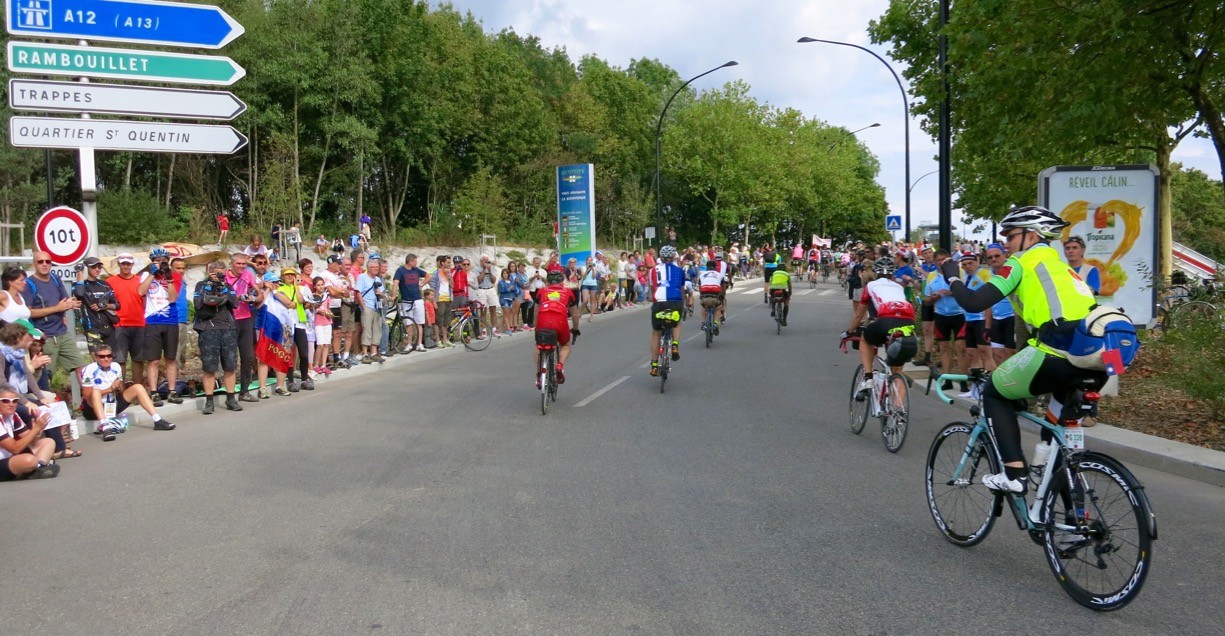 Having raced track bikes at my local velodrome and dabbled in the cyclocross circuit for several years in the Bay Area, I’ve had some experience with folks cheering for me while I speed along in circles. But your friends shouting your name (or good-naturedly heckling you) at an amateur race is one thing; it’s an entirely different experience when you’re riding Paris-Brest-Paris.

I expected a big turnout at the start on Sunday afternoon — especially since the fast sub-80 hour group gunning to “win” or induct themselves into La Société Charly Miller — draws the TV cameras and crowds. But even after the elite riders had left, the announcer’s booming voice also counted down the departure for each wave of the 90-hour group. I was lined up with the “G’s” at 5:30pm, the second group slotted to leave.

The spectators erupted in applause and whistles, and we rolled out underneath a giant inflatable arch, similar to the ones often used to mark the starts and finishes for stages in pro races.


As we set out for Brest and back, two phrases were repeated over and over by the fans that lined the road throughout the three-and-a-half days of our journey: “Bonne route!” and “Bon courage!” It didn’t matter if it was 1 o’clock in the afternoon or 1 o’clock in the morning; there was always someone clapping and offering us encouragement. Sometimes there were large groups of local residents enthusiastically hailing our arrival, other times it was just a lone voice calling down from an upper story window of a stone cottage. I’d often be surprised at night by a, “Bon courage!” that mysteriously emerged from quiet pockets of forested roads or dimly lit alleyways in the small rural towns. The words continuously echoed around me from wherever we were, urging us forward in our quest to ride 1230 kilometers within the time limit.

The power of these two simple phrases was remarkable. Whenever I began to feel crushed by the inexorable weight of exhaustion, an adorable child would pipe up to prop up my sagging spirit: “Bon courage, madame!” Then he or she would reach out their hand, angling for a high five, and squeal with delight if we made contact. In the beginning of the ride, I’d respond by saying, “Bonjour!” or “Bonsoir!” or “Merci!” But as my tired voice gave way, I relied on my bell to give thanks — ding, ding! — which always brought a roar of approval from the fans.

On my second night on the road, just beyond the outskirts of a charming village called Saint-Martin-des-Prés, a young boy wished me “Bonne route!” from the darkness of the desolate road. I pulled over to the yard across the street; I needed to put on more layers in order to ward off the chill from the night air. He walked over to chat with me and it turned out he was a precocious lad from England vacationing with his family in France from the summer.

“Can I ask you a question? Is it annoying, or frustrating for you, to already see riders returning from Brest while you’re still heading out there?”

I silently said to myself in my head, “Geez, kid. Don’t remind me.” But I graciously replied, “I try not to think about that. Besides, in a few hours, I’ll be the one passing riders on the way back.” I bid him adieu, but not before gifting him with a SF Randonneurs pin. (Later on, my riding partners and I paid forward the favors that the French had bestowed to us. We shouted, “Bon courage!” at the packs of cyclists who were still heading west.) There were also dozens of handpainted signs that dotted the countryside. A few referred to the Tour de France — as several stages had gone through the same towns — but many were personal messages directed towards local riders. And others were addressed to all PBP participants, some taking the forms of brightly colored sculptures (and dangling off of telephone poles or the sides of buildings), flags and banners. French drivers were unfailingly courteous — I think I only encountered one impatient driver the entire time — and while they hurtled past us at an alarming speed, they always waited for the safest opportunity to do so. Now, having experienced American road rage on an all-too-frequent basis, I was grateful that there was no honking, and no bottles or epithets were hurled my way at any point during PBP.

One of the highlights of the ride was my inbound arrival at the Villaines control. I never knew that the possibility existed to feel like a randonneur rock star, but here it was — our shining moment of glory. Hundreds of people crowded the the barricades or were perched above the straightaway, cheering us like we were Eddie Merckx or Marianne Vos on the road to victory. As I paused to park my bike, a Frenchman said to me (in perfect English), “We’re honored that you chose to come all the way to France for this,” (He surmised from my jersey that I was from San Francisco.)

“The honor is all mine,” I said, “It’s really a privilege to be here.”

“We love cycling,” he said with a smile. “It’s our second favorite sport!” (Somehow I found this incredibly funny.) “Just behind soccer, of course.”

It’s easy to forget, when you’re inside the randonneur bubble, that riding these distances isn’t exactly…commonplace. It’s an odd sport that borders on lunacy at times, and when you view your pastime from an outsider’s perspective — you think to yourself, “Yes, this is kind of insane.” But the French understand and not only do they believe you’re not crazy, but they treat you like a hero at a homecoming parade. And you see their unflagging dedication around the clock, as you encounter a staggering number of helpful volunteers throughout the ride who have sacrificed their time to support this event. Cycling is so rooted in their history and their souls, and experiencing this firsthand was the most foreign concept I encountered whilst abroad. It was so uplifting to ride my bicycle in a country that was filled with citizens that were equally passionate as we were about cycling. That’s when you realize just how extraordinary it is to partake in the merry madness that is Paris-Brest-Paris.