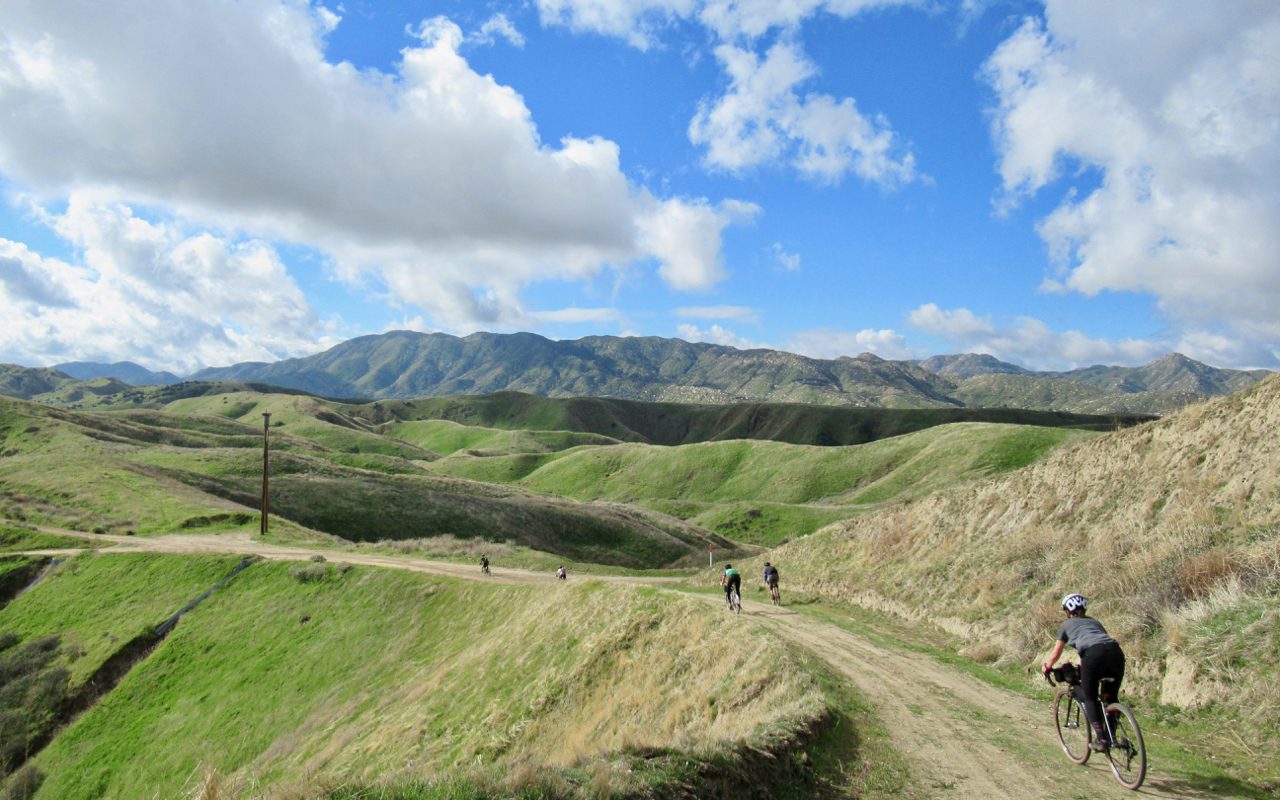 My buddy and hashtag homie, Eric – the metal half of #JenEric – grew up in the Redlands. As he’s a masochistic cyclist who thrives on crazy adventure rides, he’s had his eye on the Strada Rossa for quite some time. So we signed up and made plans to head back down to his motherland to take on the 90-mile mixed terrain route. Our friends Alix and Clayton also squeezed into our mini-van rental for the 7-hour road trip, and we blasted The Meat Puppets and Motörhead along the way.

After hanging out with friends from the Bay Area, San Diego and Redlands the night before, we woke up at bleary-eyed o’clock and lined up with the wafer-thin-carbon-fiber-roadie-pack that assembled at 7AM. We were definitely the only ones representing the rando-#underbikinglife in this group as we rocked wool jerseys, flat pedals, handblebar bags and generator hubs. Eric even left his fenders with mudflaps on his Rawland, just in case anyone doubted his randonneuring cred. The peloton sped away from us in no time, although we’d occasionally group up with them in sections – especially when a surly landowner decided to not let our group cut through his property, forcing up to make an unexpected (and hilly) detour.

The weather couldn’t have been better – no rain! – and the views were spectacular. We swooped along gorgeous singletrack, slowly ground our way up paved and dirt roads, pushed our bikes as we hiked up an impossibly steep hill, sprinted past beehives (which made Eric hella nervous), met up with our friends Dan and Adrienne, got lost, and even traversed a freezing cold creek by hopscotching over rocks (which made me hella nervous.)

After 52 miles, I was done. I was woefully undergeared on my CX bike; I definitely needed more than my 46/36 12-29t set up for this course. And I’d crashed early on after hitting a slippery rut on a descent, so after all of the sand, mud and quad-busting climbs, I decided to head back to the finish. Plus we’d only hit one SAG stop – the other ones had packed up a bit early it seemed – so we ran out of food and water. (That first SAG stop did give us beer, though. And thankfully, a kind woman selling honey along the road gave us some water, and we bought some honey sticks as nourishment.)

I soft pedaled another 10 miles to the finish, while the rest of the crew soldiered on for another 23 miles until they decided to bail as well. Then we feasted on Mexican food, drank beer and then downed endless rounds of dirty martinis at The Flamingo, aka “The Dirty Bird” (one of Eric’s old hangouts) with some of his hometown friends. ‘Twas a fine weekend that left us tired and ready for more Type 2 mixed terrain fun. Thanks to the organizers for a stellar time!