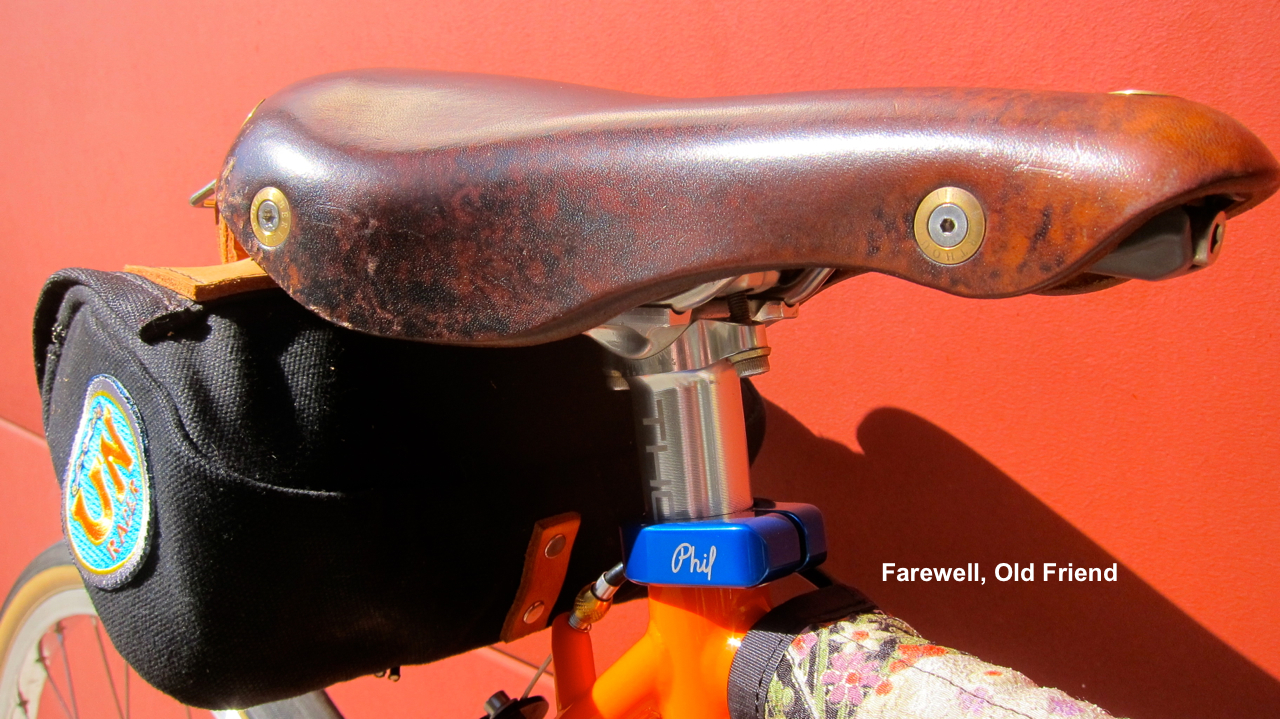 Last December, I declared 2013 my Year of Randonneuring. After several of years of reading about other friends’ exploits on their steel bikes — riding miles and miles all throughout the Bay Area, sometimes through the night (and later I learned, even longer) — I succumbed to my perceived romance of embarking on my own long-distance endurance adventures.

But first, I needed my own randonneur-friendly steed. As I didn’t have money at the time to get a whole new rig — and my Ebisu touring bike was too heavy for the task — I cobbled together a rather kludgy solution with my aluminum El Camino CX bike. I zip-tied water bottle cages to the frame (this bike was built for racing, so it didn’t have bosses), built up a front wheel with a Schmidt generator hub (check out that oh-so-pro bundle of wiring for the Lumotec IQ light zip-tied to the rack) and loaded up my cockpit accordingly. The pièce de résistance was my new Gilles Berthoud Marie Blanque saddle. I’d admired these stylish French saddles for years, and now, after coveting them from afar — it was on my Frankensteined bike and matched my new handlebar and saddle bags (the former attached with an easily removable Nitto F15 rack) and bar tape.

Little did I know that this would begin a seemingly never-ending timeline of woe. Despite the fact that I had bought a women’s specific version — which meant it was shorter than its male counterparts — as I continued to ride longer and longer events, my right knee began to protest with the ever-increasing mileage. At first, I chalked it up to the fact that I had never ridden over 110 miles before this year and didn’t like this sudden uptick in distance. I contemplated quitting my first 600k due to the pain, but somehow managed to rally through the magical combination of companionship, caffeine and ibuprofen.

Afterwards, I took a bit of a break and decided that it must be some fit issues contributing to my problems. As my saddle was the only component that I had swapped out from previous CX set-up, I suspected that it was the culprit. Admittedly, I was in denial about this fact. It was so beautiful, with that gorgeous cork finish with alluring black swirls polished into it and gleaming brass bolts. How could it be to blame? But like its namesake — Col de Marie-Blanque, a short climb  in the French Pyrenees with steep pitches along the way — it gave me some hardship within a 6-month period. And the leather on the saddle wore in a bit unevenly; the right side broke in more deeply than the left (and I’d never witnessed this phenomenon on other saddles.)

But before I cast it aside, I tried the following:

— Decided to get a whole new bike (Ocean Air Bicycles) suited for randonneuring and had a 2cm longer top tube (which I love, by the way – it’s a wonderful ride!)

— Mounted a Nitto Crystal Fellow seatpost with the Gilles Berthoud saddle on the OAR, removed after 1 ride

— Installed a Paul Components seatpost with even more setback with the Gilles Berthoud saddle; still didn’t work and finally decided to retire it and give it away to a friend

The tragic part was this saddle malaise spread to my Hunter track bike. When the rails on my Selle An-Atomica saddle broke, I tried getting another one – but the replacement felt terribly wrong. Then the two women’s Brooks saddles that failed on my OAR didn’t work as well, but ultimately, the combination of a new seatpost (Paul Components with extra setback) and a men’s Brooks saddle (longer and depending on the model, not as wide) did the trick. (But as I use White Industries platform pedals on this bike, my Q factor remains unaffected — whereas my Q factor on the OAR was thrown completely out of whack when I tried the Brooks Team Pro saddle.)

Anyway, I finally ended up with the same saddle on my randonneur that I use on my road bike: a Fizik Aliante. Spec-wise, it’s narrower than any Brooks or Gilles Berthoud saddle, and long enough so that I don’t have the setback issues. I went on a 40-mile hilly road ride yesterday and had a minimal amount of pain (some of it might be lingering from an old injury or my newer ones.) It may remain a mystery as to why the women’s specific B-17 on my Ebisu works just fine — but remains allergic to my randonneur bikes. And I’ve never ridden on a Fizik saddle over 150 miles, so I’m hoping I’ll be as comfortable on it as its French predecessor, accompanying knee pain notwithstanding. I have no doubt that 2014 will be another year of ever-evolving experimentation.

To conclude, yes, I probably should have gone to a fit expert from the get-go. But I was stubborn and thought I could troubleshoot it myself. After a recent fit session with my friend Colin at Studio Velo, he helped to confirm my hunch that it was most likely the Gilles Berthoud saddle all along. After Colin put me back on a non-setback post and made some minor adjustments to my cleats, my knee pain finally seems to be subsiding. I’m crossing my fingers that all will go well in the coming months as I tackle my goals of earning my first California Triple Crown and 1200k ride…