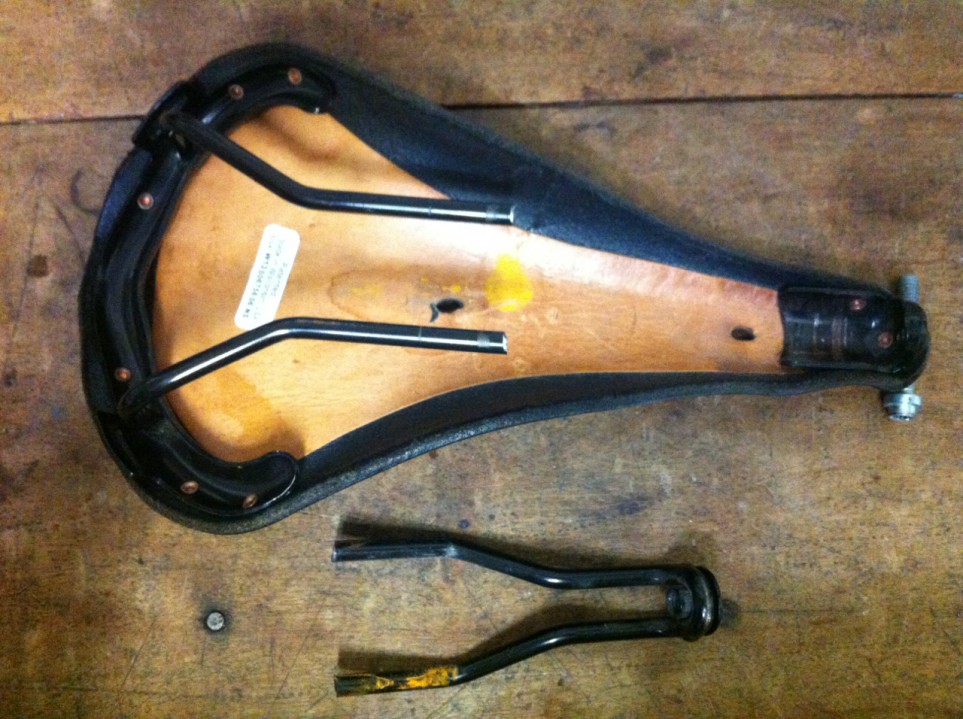 The Bearded One and I went for an evening fixed gear ride tonight on the Bay Trail in the hopes of rounding up my overall mileage for January to 700. Just as we were approaching the point to turn around so we could find a place to have a late dinner, I suddenly heard a loud, “CRACK!” The rails for my Selle An-Atomica saddle had snapped cleanly off. It came as quite as surprise as I hadn’t ridden over any major bumps in the road. TBO theorized that since I had my saddle positioned fairly far forward, the uneven weight distribution (with more towards the back) had weakened them over time. (I’ve since checked my other bikes and they don’t seem to have the same issue.)

Since we were far from home, I didn’t have much choice and pedaled standing up for 6 miles to the nearest open restaurant. TBO manage to rig the saddle back on so that I wouldn’t impale myself on the seatpost along the way. It was pretty hard moving forward without the ability to coast, but TBO rode the entire way out of his saddle as well out of solidarity (such a sweet husband) and we took several breaks to rest my cramping calf muscles.

I’ve had this saddle on the Hunter for close to three years now. Checking on the company’s website, it looks like they’ve recently upgraded their rails to chromoly; I’m wondering what material they used for their older models. (I’m going to ask them via email to see if they’ve had any other customers report failures.) Anyhow, it seems that I can just replace the frame as the rest of the saddle is in fine condition (although getting a new non-slotted one would be just a few dollars more). I’m just glad it didn’t break when I was descending a hill or some other potentially disastrous situation!