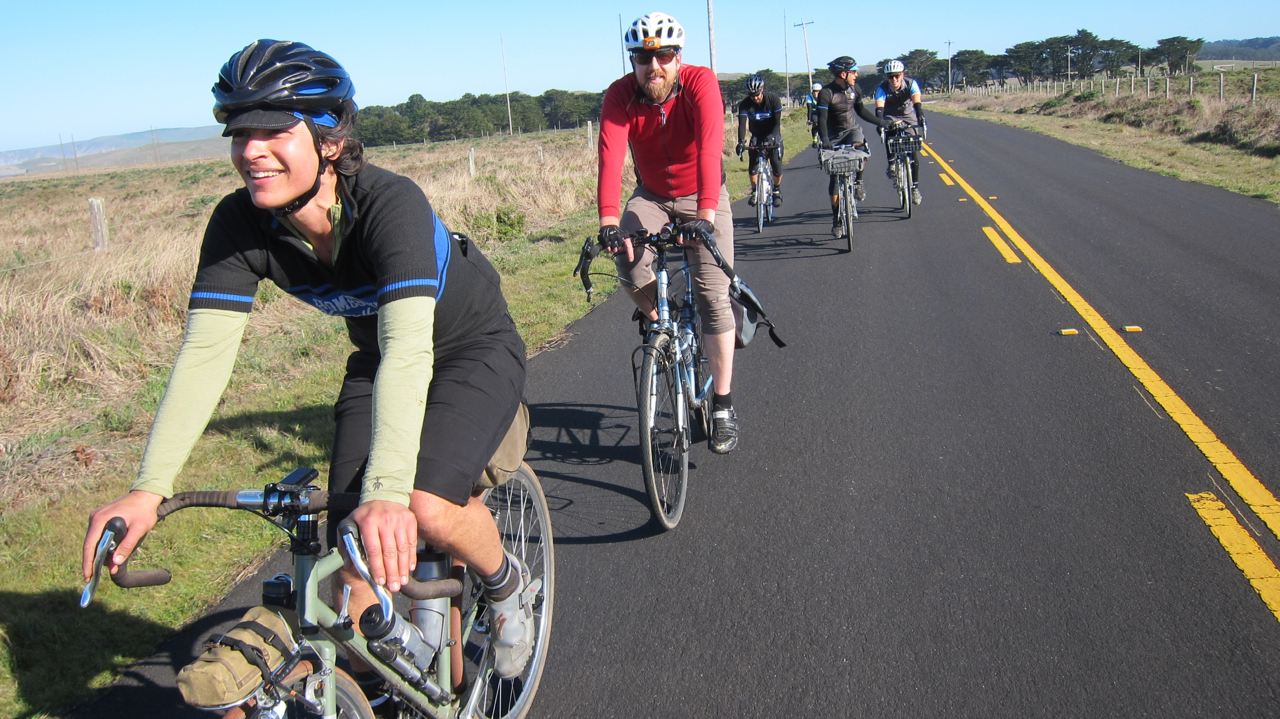 I’ve said in previous blog posts that I never thought I’d be racing track or cyclocross, or find myself riding a mountain bike — but something about living in Bay Area encourages extreme cycling behavior. And when I use the term extreme, I mean that cycling can take over your life if you let it. And so my inexorable evolution into becoming a serious bicycle junkie, which began in earnest in my early teenage years but kicked into high gear 6 years ago, continued into its next phase at the start of 2013 with randonneuring*. A typical randonneur event, or brevet, means you ride a specific distance within an allotted time period. You have to check in at control points and have a signature or card stamp as proof. This format is appealing to me for many several reasons, primarily because it’s not a race, but you’re still encouraged to go at least a certain pace within the time restriction (usually a generous 10-12 mph). The challenge lies more in the amount of distance and elevation you cover within the brevet. A brevet series consists of 200km, 300km, 400km and 600km, with the French grandfather race of them all, the Paris-Brest-Paris, running a staggering 1200km in a 90-hour period. (Once you complete a brevet series, you can qualify for this event which is held every 4 years.)

You can also ride whatever you like for a brevet. I saw everything from carbon TT bikes, recumbents, vintage steel touring bikes and mountain bikes at the start, along with ones built with the more traditional randonneuring accoutrements (relaxed geometry, wider bars, fenders, handlebar bag and generator lights).

The only drawback I foresee for myself with randonneuring is that you have to get up early for these events, and I am most definitely NOT a morning person. When my alarm went off at 5AM, I thought, “Ugh, what have I signed up for?” But by the time I was checking in at the Golden Gate Bridge with a large crowd of other insane cyclists, I was excited for my first brevet. San Francisco Regional Brevet Administrator Rob Hawks administered the pre-ride oath where we promised to ride safely and “not do anything stupid.”

The 200k Point Reyes Lighthouse is the scenic brevet that kicks off series organized by the San Francisco Randonneurs. You ride out to the Lighthouse, then make a detour up Hwy. 1 to Marshall, loop around Nicasio Reservoir, then head back to the city. It’s a challenging ride of about 126 miles and 7500 ft. of climbing (although this number seems to vary depending on the accuracy of your GPS.)

The Bearded One was out of commission due to a cold, so I was on my own for the ride. But my friend Brian, who I met through bike touring, spotted me right as we were bombing down the hill towards Sausalito. I joined him and his awesome biker gang, the Homespun Heartthrobs, for the duration of the ride. Ami, Amar, Brian, Omar and Tim have ridden the Davis Double together and have matching wool jerseys and cute caps made by Brian that they wear to signify their allegiance. (That’s another great aspect of randonneuring: the potential to meet wonderful new friends along the way.) I had never ridden out to the Lighthouse, which takes you through federal land that’s managed by historic dairy ranches. It’s a beautiful ride of rolling hills with stunning views of the ocean. The road is peppered with a few cattle guards along the way and culminates with some steep climbs towards the finish. The wind, which was in full force yesterday, was our biggest foe. By the time we checked in at the first control point at the parking lot, it was pretty cold. It compelled us to keep moving and continue on to Inverness. This was when my pedals started to act up — perhaps due to the sand we had to walk through at one section of the road near the Lighthouse — and I wasn’t able to unclip my shoes. Ami, who’s a mechanic at Missing Link, made some quick adjustments to my pedals and I cleaned out the gunk within my cleats. But they continued to plague me for the duration of the ride, and I’d approach intersections with terror not knowing whether I could unclip or not. (Luckily, I didn’t fall over once.) After a lunch stop in Inverness, we powered onwards to Marshall. The wind, which had been pretty cruel earlier in the afternoon, was now just plain brutal. It was over 10 miles of sheer, soul-crushing headwinds to the second control point. Ami and Brian bravely pulled us to the Marshall store — famous for its chowder — and we were happy to hustle into the crowded store packed with cyclists to get our cards stamped. But 10 miles of headwinds meant 10 miles of glorious tailwinds on our way to Nicasio Reservoir, and Ami put it best when he shouted, “I love bikes again!” And Brian joked, “Look, everyone’s back to being happy, chatting and all cheerful.” Never underestimate the restorative powers of a tailwind. After a quick pit stop in the town of Nicasio, where we were greeted by the most adorable pair of Golden Retrievers poking their heads out of their owners’ jeep, we continued our journey around the Reservoir. After surviving the climbs to the Lighthouse and the day’s fierce headwinds, climbing White’s Hill, Camino Alto and the slog back up to the Golden Gate Bridge felt surprisingly easy. We made it back just after sunset after being out on the road for a total time of 11 hours and 34 minutes. A big thanks goes out to the Homespun Heartthrobs for providing me with drafts off their wheels, snacks, mechanical support and great company along the way. I hope to ride with them again soon! And my legs feel surprisingly good today. I made sure to eat and drink plenty of food and water during the ride, which I think helped with energy levels and recovery. And all of the training from the past month and a half paid off as well. The 200k was my longest ride within a 24-hour period to date, and I’ll do one more next month (2 Rock/Valley Ford) before tackling the Russian River 300k in March.

*Visit this website to learn about this type of cycling event.