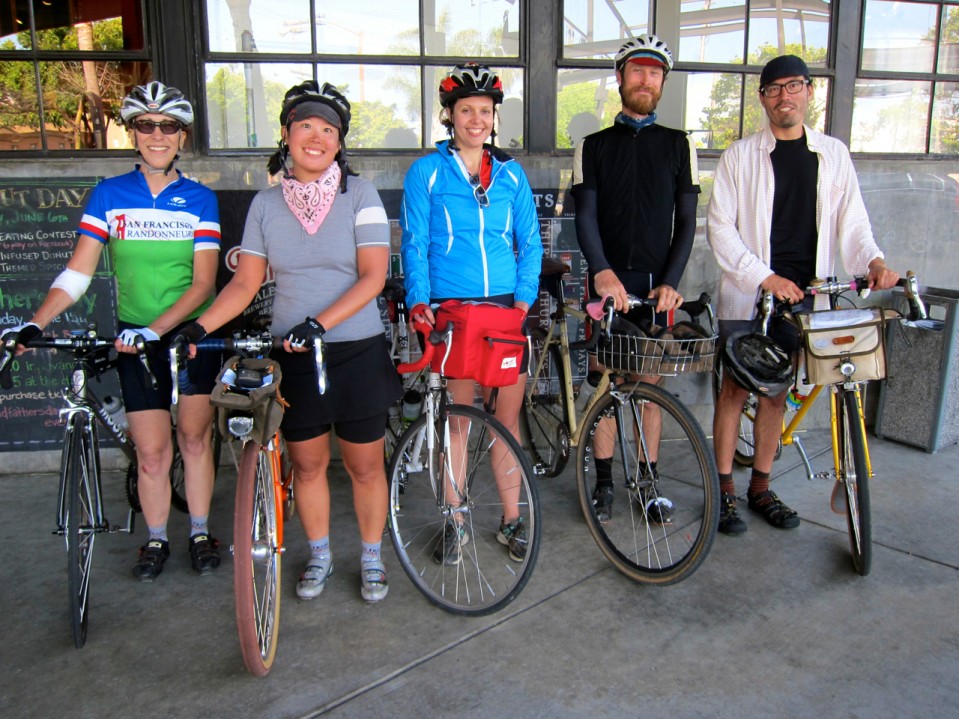 As TBO is not too keen on riding distances longer than 200k, I was thrilled when he volunteered to design a populaire-length route and co-lead a team for this year’s SFR Dart. He recruited two non-RUSA friends — Jonathan and his girlfriend Keli — and I invited my rando pal Jorge, who was on my team last year and has ridden 3/4 of the 2014 SFR series (but had to skip the 600k due to knee problems.) Our plan as Team “The Bearded One Express” was to start at the Ferry Building in San Francisco, retrace much of the Lucas Valley Populaire route, but then continue north towards Novato instead of west. Then we’d take Sears Point Road, aka Route 37, across the northernmost part of the bay to Vallejo. After stopping at our 6-hour control in Crockett, we’d then shoot down towards the finish at Pyramid Brewery in Berkeley.

But as bad luck would have it, TBO ended up getting appendicitis just three days before (on his birthday, no less) and had to drop out as he was recovering from surgery. So while we’d be riding without our team’s namesake leader, we pledged we’d ride in honor of his dearly departed appendix. But then Keli was suffering from knee woes from a mountain bike crash, so she ended up withdrawing as well. Fortunately, Roland suggested I make two last-minute substitutions and I poached two SFR Dart volunteers, Denise and Caitlin (who I’d ridden with in last year’s Lucas Valley Populaire).

The weather was cool and foggy when we set out from San Francisco, but shifted to sunshine by the time we reached our information control in China Camp. It was lovely and warm at our lunchtime control in Novato, and we had a small impromptu picnic on a small patch of grass in front of the bakery. Now up until this point, our ride had been going smoothly. But sometimes, the randonneur gods have other plans in mind. Just the other day, I had been talking with Jason “Pudu” Pierce about ride reports, and how he’d stopped chronicling his rides now that most of them passed without incident — unlike his first exhilarating year of completing long-distance events. And I had to agree that my own write-ups of late had evolved into photo essays as I was reporting less personal drama. I was more comfortable in the saddle, had worked out my nutrition issues, felt acclimated to the mental challenges and had no other physical ailments to contend with.

And so I assumed this blog post would be a brief recounting of the day’s adventure with photos that illustrated our ride. However, the crossing of Rt. 37 was noisy and windy, and Jorge’s knee started to complain along this stretch of road. He decided to adjust his cleats to see if that would help; we had stopped anyway as Denise got a flat after rolling through a nasty pile of broken glass on the shoulder. Jonathan had some knee pain as well but was doing his best to alleviate pressure on it.

Then we made our way toMare Island (which is actually a peninsula) and the oldest shipyard and naval facility on the West Coast. (You can see traces of its World War II history in some of the old buildings that remain standing along Walnut Avenue.) Just as we were about to cross the drawbridge that leads to Vallejo, Denise got caught by a set of railroad tracks and took a nasty spill. She got road rash alongside her right leg, and a rock took a bite out of her elbow and left a small hole behind. But our team sprung into action and armed with their first aid kits, Caitlin, Jonathan and Jorge tended to her wounds. My contribution was to perform a silly dance to distract Denise while they cleaned her arm with alcohol swabs. “There’s nothing happening over therrrrrrre! I’m dancing over herrrrrre!” We briefly discussed where the nearest BART station would be, but Denise wouldn’t hear of it. “It’s only 30 miles. We can finish together!” (Spoken like a true randonneur trooper!)

We had some time to regroup and relax at our Crockett stop, although we did have more hills ahead of us — as well as our old nemesis, the Headwinds from Hell. (And poor Denise got one more flat; one piece of glass was still lodged in her tire.) But we had plenty of time in the bank to go at a moderate pace. We were separated at times as some folks were feeling the effects of the rollers on San Pablo Avenue and Appian Way and slowed down, but we’d reunite at the summits and descend together. By the time we hit our final 10-mile mark, we leisurely meandered to the finish to stretch out our remaining time — and were ready for burgers and beer!

I’m really proud of our team for rallying to finish together despite the hiccups along the way, especially Denise, who rode the last 30 miles like champ. She gets extra kudos for completing our entire 80-mile route — despite her injuries — with an outsanding positive attitude. (She’s still gonna tackle the Davis 600k with me, too!) And bravo to Jorge and Jonathan for toughing it out throughout the day, sore knees notwithstanding, and being excellent company all day. And it was fun riding with Caitlin again, who did a great job as well and is working her way up to riding her first 200k — so you’ll probably see more of her at future events. Thanks to The Bearded One Express for an awesome day and for breaking my team curse; I’m now 2-2 this year (unlike last year’s 0-2 record.) Lastly, but of course never least, thank you to the ever-patient Roland who edited our route for errors, processed our paperwork, answered our endless questions via email and swapped in our substitutions. You are truly a saint! And high fives to our dear RBA Rob (who’s currently down with a cold, but hopefully you’ll feel better soon) and all of the volunteers who pitched in for another fine SFR event.