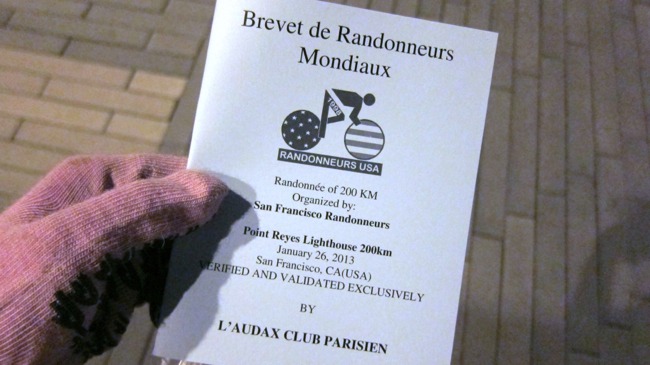 Sidelined by an IT band injury during 3CR last week, I’ve had a lot of time to think about randonneuring these past few days — and what it means to me. When I decided to give it a try last year, I was attracted to my romantic notions of this sport: adventuring on the open road with like-minded comrades enthralled with exploration, thus pedaling for miles astride a beautiful steel bike with its bespoke accoutrements. Flipping through the pages of Bicycle Quarterly, I was lured in by photographs and articles that helped conjure up an idyllic past that could be lived vicariously in the present-day; for me, randonneuring could teleport me back to the era of wool jerseys and weathered leather saddles.

The End of the Honeymoon

During my first series, I was caught up in the newness of it all and each subsequent distance that I survived was a triumph. I began to meet fellow randos I could ride with, troubleshooted what worked and didn’t work nutrition-wise, built up my endurance and figured out, at long last, which saddles could work me for this type of riding.

But this year, my goals were different. While I was maintaining my R-12 was not too difficult in the latter months of 2013, I had “slacked off” in regards to overall monthly mileage. Getting back on the bike in January and riding my first  brevet at a brisker speed was hard — too hard. So I began to devote myself to racking up the sanctioned miles; most of my rides were done “for credit” to obtain awards from RUSA. I wanted to improve upon my results from last year and go faster, further. And I lusted after the RUSA Cup, so I had my sights set on my first 1000k. Then I wanted the P-12 patch, so I was working on that simultaneously as my ongoing R-12+. And maybe I could get a K-Hound Award if I was really, really, ambitious.

The Infinite Cycle of Cycling

So I started to get caught up in training and speed and weight and all of the stuff I obsessed about when I was racing track and CX. And the main reason I stopped racing was that it took up a lot of time: eat, sleep, work, train, repeat. I realized it would take a lot of work to get faster and see results, especially since I’m not a naturally gifted athlete. So in the end, I didn’t care about competition as much, not enough to deal with all of the hassle of traveling and budgeting and planning and sacrifices and everything else that it entails. But as a pseudo-competitive person, I couldn’t just turn that off. I couldn’t just enjoy the racing in of itself, because I didn’t want to be last. So I was content being mid-pack fodder until I wasn’t.

The Only That Doesn’t Change is My Love for Change

The other thing I realized about myself is that I thrive on change. I’ve lived all over the country, tried different occupations and hobbies, love nurturing friendships from all walks of life — and so for me, moving forward means continuing to experiment with new things. While there are some definite constants in my life, with cycling being one of them, I realized that I am susceptible to burnout. I’ll embrace a new pastime wholeheartedly and throw myself into it with everything that I have, but then I’ll move on once I’ve reached a certain goal — or plateau. And if I truly loved the racing for its own sake, I’d be happy — but I also love films, art, books, food, writing, travel…some of which I’ve put on hold in service of my goal of getting to Paris-Brest-Paris. Once again, I see less of my non-cycling friends and even most of my cycling friends since they can’t come along on my rides unless they’re a member of RUSA.

The Myth of “Pass/Fail”

So my life has narrowed its focus back to eat, sleep, work, train, repeat. And while randonneuring is “pass/fail”, I realize that it’s kind of a myth. There’s certainly quite a few riders that focus on how many miles they’ve accrued or finishing times — we can’t help it, as humans are naturally competitive creatures (some more than others, of course). And the way that randonneuring is structured, you can either go slowly, still make the time cuts but be on the bike much longer and have to deal with the consequences of that: physical pain, perhaps be stuck riding alone (which some folks don’t mind), boredom and overpowering sleep deprivation.  Or you can go faster and thus have the possibilities of some companionship and enjoy longer breaks. If you really want to kick back and have a burger and beer for lunch, well, you’ve got to be fast enough to be able to have that downtime. Time management is one of the inherent challenges of randonneuring and the clock is always ticking.

Plus, you have to be able to be disciplined, organized, self-sufficient (to varying degrees, but there’s some baseline stuff that all randos need to do to finish these rides in terms of fitness, gear and following rules) — this is no leisurely bike camping tour. Once you get above the populaire distance, it can be fucking hard. So yes, it is awesome just to finish. But I think given the choice, most people would rather finish several hours before the time cut off than squeak on in right under the wire.

A friend told me the other day that he had abandoned Strava as he didn’t like the person it was turning him into. He was getting too married to numbers, data and it was ruining his rides — because he’d get cranky if his computer died and become unpleasant company. So he deleted his account. And in recovering from an injury, he’s also scaled back his personal goals while also learning to embrace DNFs with the “shit happens” mentality. On a recent ride, he could have pushed on solo through the night when a friend had to abandon — but he was also happy to have an excuse to just say, “You know, today was a good day — I just did a 200k (and didn’t have to use my AK.*)”

In these days since my DNF, I thought, “Well, I just need to get back to it. Where I can do a 1000k?” And in my search, I had to look at my schedule and think, “Ok, that looks too hard, those conflict with the double centuries on the calendar (also trying to get my first Triple Crown this year), that one is too soon, I should do these permanents to train….”

Frankly, the whole process just made me feel tired, frustrated and demoralized. I had been looking forward to kicking back in August, but because I had already had my mind set on doing a 1000k this year (to see how I felt about riding this distance) — I was committed to seeing that through. But now I was feeling done. I’d never worked so hard for something and not succeed. All of my enthusiasm had drained from me and I was just seeing another endless slog of training rides ahead of me. (I guess I have to remind myself of Clayton’s rule: “Remember, it does not have to be fun to be fun.”)

Enduring as an Endurance Rider?

Last week, a friend of mine said to me, “It seems there’s two types of people who take up randonneuring: those who try it out for several years then drift away and then there’s others who adopt it as a lifelong pursuit.”

Yes, there’s a lot of lessons to be learned about acceptance of perceived failures, changing expectations and so forth. Through randonneuring, I’ve learned a lot about my outer limits of  physical and mental abilities. But I know that in order to improve, I would have to dedicate myself to a more gradual process and embrace the inevitable highs-and-lows that comes with this sport (well, with any long-term goal, really.) And in the big picture, there’s terrible tragedies that occur* that remind you that you’re fortunate to just be biking at all.

Personally, my aim was to just go for PBP, hang up my hi-viz ankle bands and then return to my real love: bike touring. But then, I never thought I’d be aiming for that event at all until last year when my fellow riders drew me in with visions of the French shouting, “Allez! Allez!” from the roadside like it’s your own Tour de France. (I’m a sucker for rides with historical significance.)

We’re always our own worst critics.  I will recharge and do shorter, fun rides that remind me of when riding was just riding with no rules and a 75-mile day meant you put in a good effort. But a 1000k in Florida looms in early October, so…I hope I get my mojo back.

*Will be riding in honor of Matthew O’Neill next year: #PBPforMatthew