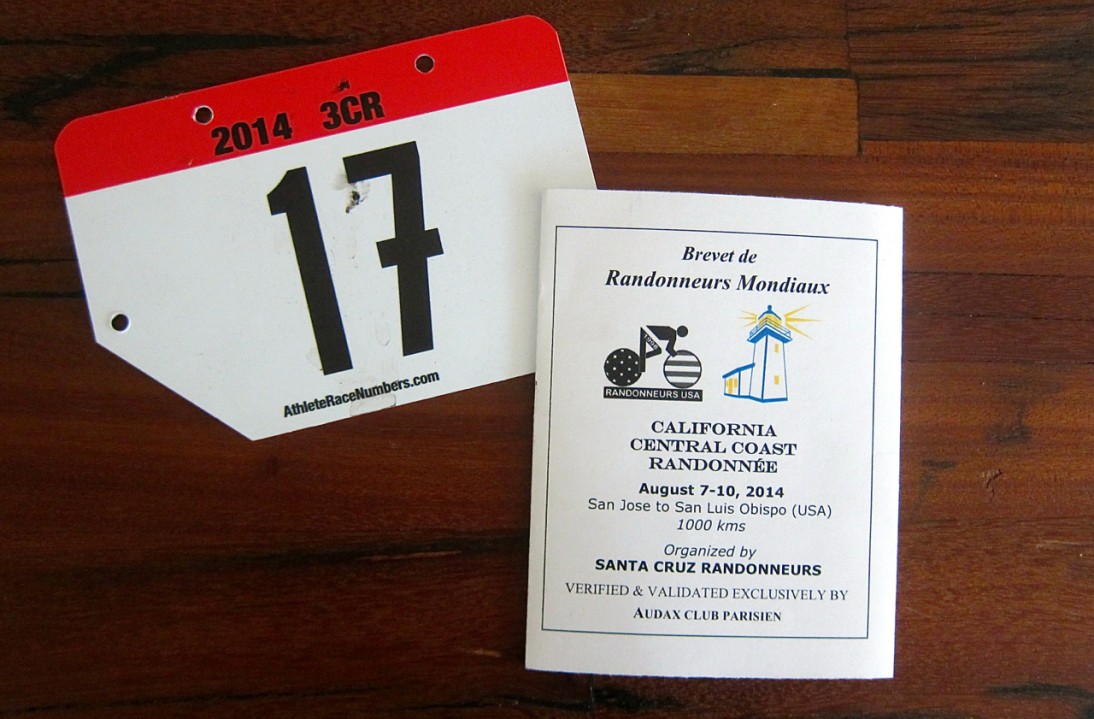 Well, this is certainly not the ride report I thought I’d be writing today; I figured I’d still be out on the road pedaling towards SLO right now. But for all the training and prep one does for a big ride — you realize you can’t anticipate everything that might happen.

TBO and I arrived in San Jose on Thursday evening and checked in with the Santa Cruz Randonneurs’ RBAs, Lois and Bill, along with the start volunteers.

After chatting with fellow riders, we headed off to a local restaurant where folks gathered for a pre-ride dinner. Then it was off to bed by 10PM — I was sharing a room with Jason and his lovely Kirk fixed gear steed — so we’d be ready for a 3:30AM wake up call.


My back was a touch sore that morning (and had been that week as I must have tweaked it somehow; maybe it was the hilly fixed gear ride from Sunday…) But I didn’t think much of it and headed off to the start to get my photo snapped (there was a professional photographer taking pics of all of the riders) and my card stamped by Elaine. And then, after a short pep talk from Bill — we were off at 5:30am!


With the exception of the fast riders that would eventually arrive in King City between 8:30-9PM, the rest of the group stuck together until the Old La Honda climb. I took my time as this was the first (and biggest) climb of the day but kept a decent pace.


I reunited with Gabrielle, who was riding strong and had gone on ahead (she was my planned riding partner), at the Sky Londa info control at the junction of Hwys. 35 & 84. I didn’t think to put on arm or knee warmers as San Jose had been warm even in the early morning hours, but up along the ridge — it was quite foggy and cool. The descent down towards Stage Road near Hwy. 1 was freezing — I saw Jack pulled over putting on more layers — and should have done the same in retrospect. We pedaled on towards the info control at Higgins Purisma, riding intermittently with Kitty, Peg, Joel from North Carolina, Jack and several others.


Then we headed north to our first receipt control at a convenience store along Hwy. 1 in Half Moon Bay. Lots of riders were fueling up here (I bet these stops made a great profit yesterday!)


Then it was back down Hwy. 1 towards Santa Cruz with a short wiggle inland towards Pescadero. This was when I first started to notice my right IT band was acting up and slowed down to try and massage it as I kept pedaling. When I caught up with Gabrielle at the gas station control, I let her know I was having some pain issues and took two Advil in the hopes it would go away. But it got worse by every mile, and we separated again on Hwy. 1. I grouped up with Kitty, Peg and another rider from Japan (who had miniature renditions of his native flag and the Stars and Stripes mounted on his stem cap) for most of this stretch towards Santa Cruz.


But the soreness had now turned into full-on sharp, stabbing pains, and I stopped to rest at a Safeway to assess the situation. After eating a bit and texting with TBO, I decided to see how far I could push onwards. Progress was slow and painful, especially with the short, steep rollers that peppered this portion of the route. I tried to keep up with other randonneurs but eventually stayed solo keeping my own pace.

I made it about another 10 miles to a Starbucks in Aptos before deciding to call Lois. I was already in tears and couldn’t believe I’d DNF at just 200k in. Bill and Lois happened to be in the area and pulled into the parking lot to give me in-person support. They gave me some reassuring words, tips and urged me to rest for a half-hour, then see if there was any improvement. And two other randos, Mike and Mike from Florida, had stopped there and also helped to cheerlead me on and boost my spirits.

After they rolled away, I decided to try and at least make it to Corralitos. There were a few hills that tortured my IT band, but fortunately it was only 5 miles to this small town. Phil, Clyde, Ryan and Kevin were gathered in the gazebo and also goaded me onwards (and thanks to Phil for sharing his beer with me.) Andy from Santa Clara pulled in and was kind enough to offer to roll slowly with me to the next info control if I wanted to press on. Given that it was only another 3 miles, I agreed and we took a leisurely, chatting-friendly pace along the scenic Browns Valley Road, then grouped up with Mark from Modesto and his brother Phil who lives in Connecticut on Hazel Dell.


The next 16 miles wove through flat farmlands and we were able to get to Aromas in pretty good time. The pain was still nagging me, but I was able to ignore it for that final leg. We saw a ton of randos at the corner shop getting their last rations before the lonely roads of Tres Pinos and the Pinnacles. The 20-minute break seemed to help assuage the pain, but when I hopped onto my bike to try and keep going — I realized my ride was over. I couldn’t clip in at all with my right foot due to the pain. Just thinking about Day 2, with its Big Sur climbs, would be impossible without a lot of painkillers (and perhaps some damage in the future.)


Andy was reluctant to leave me and waited until he knew that help was on the way. “My heart is broken for you,” he said, and I felt like mine had broken a bit right then and there as well. Thinking about all of those long training rides from this year (I’d already logged more RUSA miles at this point than all of last year’s total) was so demoralizing. And all of the aforementioned planning and prep for my first 1000k…and here I was, DNF’ed on Day One. But I knew it would be better to DNF here, while it was still daylight, than on the side of the road in the dark. Still, when I saw them all roll away, I couldn’t help but shed some more tears when I knew that this was the end of the ride.

I called Lois again and left a message, and other randos had been kind enough to alert Bruce, who was one of the roaming SAGs on duty. He massaged my leg, gave me some ice, loaded up my gear and then we hopped into his car for the drive to King City. Along the way, we swapped stories about the challenges of randonneuring and asked riders who were still out on the road if they needed anything (it was great to be able to cheer them on) and see them pedaling with determination into the night towards the Pinnacles and the overnight control. All of the riders were in good spirits and said, “All is well!” when we inquired how they were doing. (Except we accidentally annoyed Eric — who shouted at us, “Go away!” — when he thought we were some jerky driver hassling him until he realized later we were one of the SAG cars.) Andy stopped again to wish me the best when we pulled over for a moment — such a sweetheart — and I lent my sunglasses to Kevin, who’d accidentally left his behind at one of the controls. We also saw Roland, who was on SAG duty, and stopped to check in with Peg (she’d been hit on the cheek by some mysterious bird or insect and had been a bit concerned.)

After a brief pit stop in the Pinnacles, we made our way to King City where TBO met me so I could grab my drop bags. I bid farewell to Lois and the rest of the volunteers on duty.


Writing up this blog post this morning brought forth a fresh round of tears, especially when I saw the photo of the sad face that Patrick had written on the check-in sheet for me and posted on Facebook. Hopefully I won’t remain injured for too long. And who knows, maybe I can get in a 1000k distance this year. I see there’s one coming up in Seattle in September and there’s a permanent I could do from SF to San Diego…Anyway, I’m rooting for all of the randos still out on 3CR! And thanks to everyone for all of the encouragement and sympathetic messages along the way — it really meant a lot to me when I was at my low point. <3