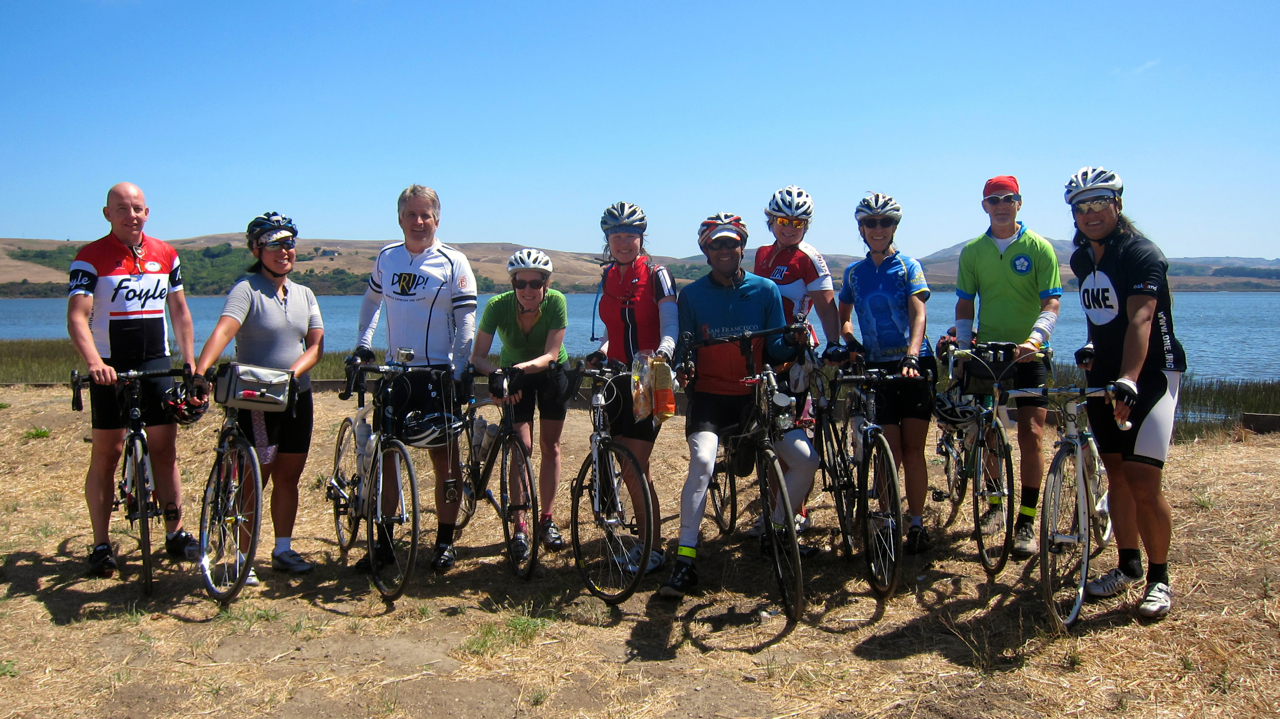 This weekend was a double-permanent weekend for me; first up was a fun populaire, the 105k Petaluma Peddler, and then the 200k Dumbarton Hamilton Roundabout.

11 of us came out for the ride to join Ann as she gets back on the bike post-cancer treatment (with the bonus addition of Jesse, who unfortunately had to DNF the Old Caz 300k due to a broken spoke), along with Clyde, Denise, James, Jason, Katherine, Lane, Roland, Sarah and myself! We started off in Petaluma and headed up D Street to do my “favorite” series of climbs that lead towards Nicasio Reservoir (where there were some firemen doing some sort of training exercise); then onwards to Inverness and Tomales for our snacky controls; followed by one info control on Chileno Valley Road; and back to Petaluma for dinner and beer at Taps. It had been a while since I’d ridden a lot of these roads, and some of them were new to me — plus we had spectacular weather — so it was a wonderful day with great rando friends to celebrate Ann’s road to recovery! I really didn’t want to get out of bed Sunday morning after staying up late to volunteer with Ann at the Point Reyes Station control for the Old Caz 300k, and I was on the fence about whether to ride until I only had 20 minutes to get ready. Then I hustled out the door to the start in Sunnyvale. I didn’t take too many photos along the way, as the first 45 miles or so was familiar territory through the Stevens Creek Trail, the Dumbarton Bridge and Niles Canyon Road.

With a stop in Livermore for lunch, I headed out to Mines Road for 25-mile slog to The Junction. I was baking in the sun in the 85-degree+ midday heat, but luckily I had plenty of water and my iPod to keep me moving forward (and I spotted Andrea S. climbing up from the restaurant as I was descending towards it!) The kind folks at The Junction refilled my water bottles with ice and bid me good luck as I went off to tackle the climbs leading up to the back side of Mt. Hamilton. I’d only ridden that section once in the opposite direction, so I knew what lay before me — but that last 5 miles really feels steep after you’ve got 97 logged already in your legs. I was slowly counting down using the mile markers painted on the road and was a salty, sweaty (but elated) mess when I reached the top. The Lick Observatory was closed for a private party, so I didn’t get to take the obligatory photo at the summit — I just snapped one just a little further down the 18-mile descent. Then it was just 13 miles or so flat miles back to Sunnyvale from San Jose and beer o’clock!