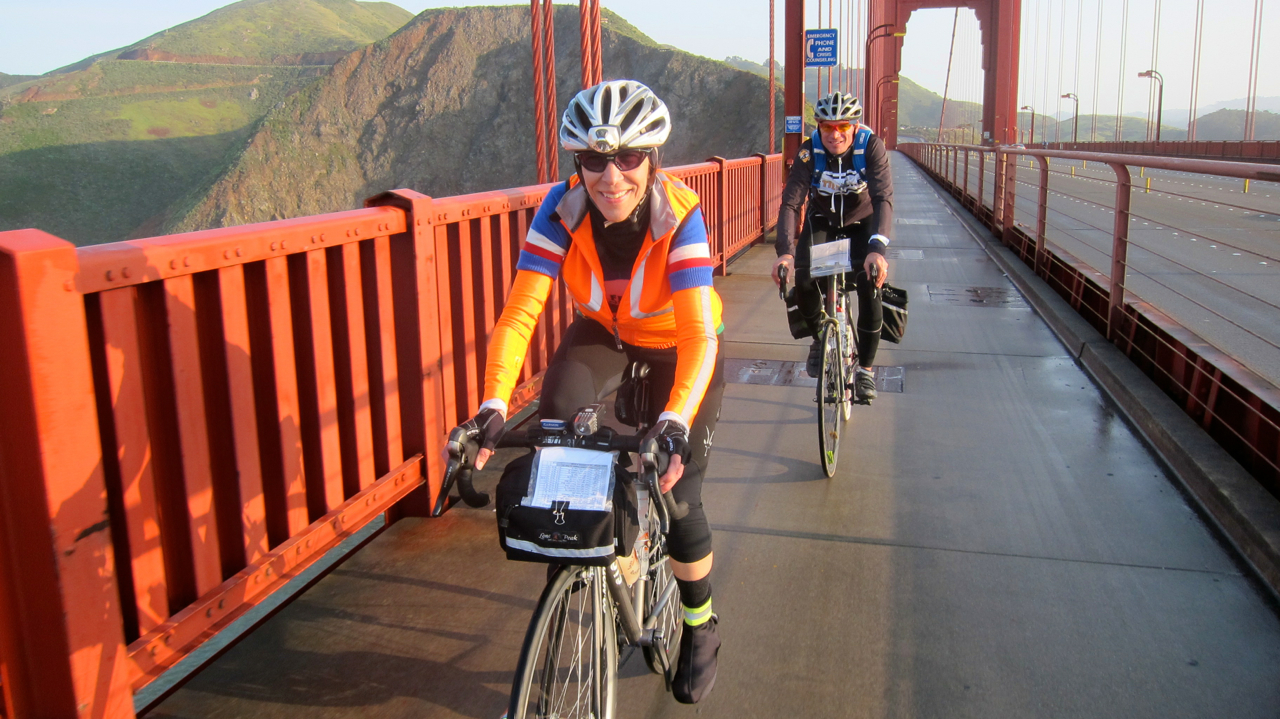 The randonneuring team events have not going well for me in the past; I DNF’ed both my Flèche and Dart last year. So after deciding I wasn’t quite ready to tackle DMD this month, I scrambled to find a team at the last minute.A local Sacramento rider, Julie Ni, had been looking for additional teammates without any luck — she only had one friend signed up with her just a few weeks beforehand — so she decided to join Deb Banks’ group, “Slow Learners.” Her friend Matthew Wietrick — a veteran of many NorCal double centuries — was still interested in the event, so she connected us together. I recruited my friend Jorge (who’s attempting to do the full SF Randonneurs’ series this year) and we went with the name “Third Time’s A Charm” in honor of our trio and the fact I’d be trying to finish my 3rd event. But then Denise Primrose accepted my invitation to join shortly thereafter, so we went back to the original name proposed by Matthew — Team Sacratomatoes — to avoid any bad luck by alluding to a 3-person team. A week prior, however, Jorge had to drop out due to a niggling injury from the 400k, so we were back to three!

Our plan was to use Roland Bevan’s ‘Gents on Bents‘ route from the previous year (“Slow Learners” was also sharing this course.) He was kind enough to share his cue sheet that included detailed information about suggested ‘off-the-bike’ time at each control and estimated pace. I had done a lousy job managing time in my previous events, so I was determined to be a better timekeeper this year. And while Matthew was officially captain, I was the only one in the group that had any experience on a flèche — so I hoped my previous mistakes would help prevent any scheduling snafus this time around.

The Bearded One gave Denise and I ride to Sacramento on Friday afternoon, and Matthew and his family graciously hosted us at their lovely home. His wife (also named Denise) and daughter Jillian spoiled us by making us a delicious carbo-load spaghetti dinner. The next morning, we rolled out at 7:30AM to bike about 8 miles to our start in downtown Sacramento. Denise was on her shiny titanium Moots, I had my Ocean Air rando bike and Matthew put us both to shame by riding his Specialized “Las Vegas” fixed gear — with two panniers filled with clothing and savory rice cakes made by Denise P. for us to snack on throughout our journey.

After snagging our receipt at Starbucks, we crossed the Tower Bridge to head west towards Winters. We passed through Davis along the way, and the roads were filled with other cyclists taking advantage of the gorgeously sunny Saturday.

We made it to Steady Eddy’s with plenty of time to spare, despite some headwinds that threatened to impede our progress. This cafe is a popular destination for cyclists (there’s plenty of bike parking out front with their complementary racks), and many spandex-clad folks were relaxing over pastries and coffee.

Then it was onwards to Fairfield for our next control, passing by Lake Sonoma and taking the scenic Pleasants Valley Road most of the way.

Then we traversed Suisun Valley towards Napa; this was familiar territory as I had ridden this exact section in my first flèche. After the climb up Rt. 121 — which Matthew powered up like a champ — we turned onto the Silverado Trail. Denise and I were briefly separated from him as he missed the right turn (he was behind us due to him riding fixed and therefore descending more slowly). Once we reunited, we found ourselves confronting 27 miles of unrelenting H E A D W I N D S.


As we slogged our way slowly northwards to Calistoga, Denise said, “I’m only going to say this once, but I really hate this road.” I also confessed I harbored no love for this stretch of wine country that was always packed with traffic and had more than its fair share of aggro drivers. And now we also had these godforsaken Headwinds from Hell. Denise and I tried to make feeble jokes about our plight. At one point we’d both run out of water, my Garmin decided to stop functioning and we were running about a half-hour behind. “Well, let’s look at the bright side — at least we have the wind blowing in our face.”

When we finally turned off onto Route 128, we thought we might catch a break from the hellish headwinds. But as we were still heading northwest, they tormented us until just after sunset when we arrived Cloverdale. After 132 miles of being plagued by those evil winds in varying degrees of severity, I don’t think I’ve ever felt happier to see a KFC in my life. After a pre-dinner snack, we rode the tailwinds as fast as possible to Healdsburg. I’m still amazed by the rejuvenating power of a tailwind. Just an hour before, I had been drawn into my existential rando funk — you know, when you wonder why on Earth you’re doing this when you could be doing a million other things that don’t involve prolonged suffering — but that all evaporated with the 16 magical tailwind-filled miles to the Bear Republic Brewery.

At the brewery, we bumped into Team Oblio’s Dog — led by SFR’s RBA Rob Hawks — just as they were leaving. We’d reunite again in Petaluma and Denny’s, where we saw many other teams (in various states of consciousness) including “Flèche and Bones” led by John Guzik, Andrea Achilli’s “Humboldt Plaid Asses” (they had snazzy matching plaid lumberjack-like kits), David Walker’s “Cluster/Fork” team and ¡Peces Percolados! captained by Steffen Prince.

This nighttime to sunrise period included the bulk of our climbing (I wasn’t happy to be reunited with my old nemeses, Red’s Hill and its accompanying climbs from Petaluma to Fairfax) and eating extravaganzas (so much food — where does it all go?) It was warmer than I thought it would be in the wee hours of the night, and I was thankful we could see the stars as we pedaled through ’til morning (instead of being dumped on by pouring rain for 9 hours like on last year’s ride.) I couldn’t believe I was still hungry by the time I had my second breakfast at our 22-hour control at the Corte Madera Denny’s. But as we had recovered our lost half-hour and managed to bank close to 2 hours, we kicked back and rested until it was time to head to the city. This was before 6:30AM, the window in which I’m typically feeling pretty sleepy, so I had to fight off the urge to take a nap as I figured I wouldn’t want to wake back up. But as soon as the clock hit 6:20AM, we finished up our meal and got ready to complete our final 25k to San Francisco.

We were greeted by a beautiful sunrise in Mill Valley as we made our way to the Golden Gate Bridge, which we felt we had all to ourselves at that hour. And then just before 8:30AM — we arrived in the upper Haight to the finish! Santa Rosa’s RBA Bob Redmond, as well as Bruce Berg, greeted us outside. When we stepped into Crepes on Cole, we were welcomed with a round of warm applause from our fellow Flèchers. It was great hearing many other stories from other teams as they recounted their own ups and downs from the past 24 hours (and apparently we weren’t alone in battling nasty headwinds.) Then I proceeded to drink one of the best beers I’ve ever had, but maybe it’s just because it tasted like…victory!

A big thanks goes out to Roland for organizing this wonderful event, lending us his route and having the patience of a saint as he works with us newbies; the volunteers who help make this Flèche a rousing success; the other Flèchers who cheered us on throughout the ride; and to my awesome Sacratomatoes teammates, Denise and Matthew. Even when we we’d hit our various low points during the weekend, Denise and I could always find something to talk and laugh about. She’s super fun to ride with and I look forward to sharing more randonneuring adventures in our future (I hope she joins me on the Davis 400k!)

I’d also like to give a special acknowledgement to Matthew. He not only rode the entire 229-mile route on his fixed gear (with some extra bonus mileage thrown in commuting to the start and back to the train home), but it’s impressive that he’s still riding his bicycle at all. Several years ago, he was in a terrible accident when a sleepy driver hit him on the side of the road as he was commuting to work. It took months for him to recover from his injuries, but he’s back on the bike and is truly an inspiration with his positive outlook on life.

What’s next? Aside from tackling the remainder of the Davis series, I’ve managed to persuade The Bearded One to captain a team for the upcoming Dart taking place at the end of May. So if we finish, I might be able to have a 2-2 record with team events this year!