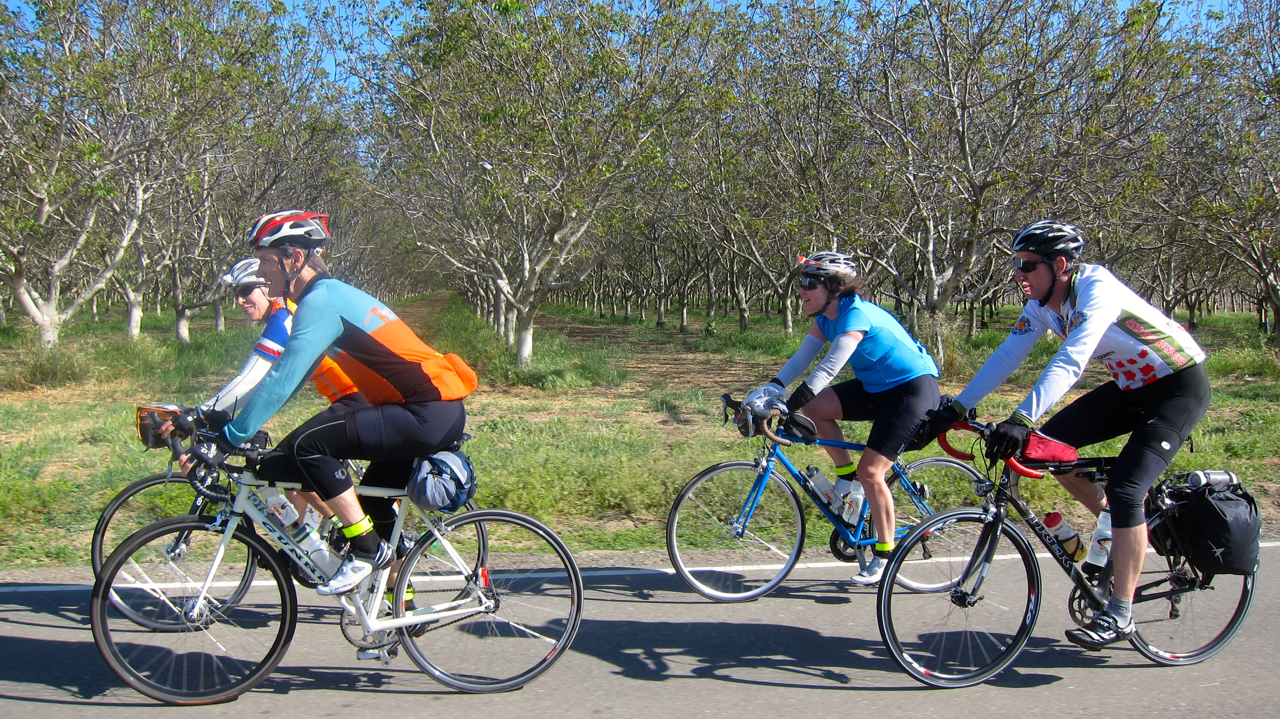 Well, I seem to have a spotty track record with randonneuring team events; as of today it’s now 2 (success) for 3 (fail). Yesterday, I DNF’ed in Geyerserville as I started to come down with some sort of plague during the ride. I took it control by control, but after tons of headwind and increasingly chilly air — I felt more run down and congested with each mile. I managed to finish 131 miles before bagging it in Healdsburg, where TBO picked me up.

Here’s some highlights from the ride:

— Denise graciously volunteer to take on captain duties this time around for “Team Herlihy’s Girl-li-Hees” (named after Patrick, another member of our team, and Bob, who joined later, didn’t seem to mind being a GAH!)

— We stayed in downtown Sac the night before and thanks to Bob’s finely honed Beer-Dar, found a nearby brewpub to pre-game with carbs and drinks (esp. the guys, who love the beer!) We also took some great photobooth snaps that are posted on my Instagram.

— The route first took us to Winters, an easy, flat, warm-up leg through Davis and its outlying orchardlandia to Steady Eddy’s for second breakfast. We encountered lots of roadies, TT’ers and tractors on the popular Putah Creek Road training ground.

— The Pleasant Valley Road to Fairfield stretch was lovely, all abloom with wildflowers and plenty of cows giving us their thousand-mile stares from the meadows. Davis Bike Club‘s Eric Senter also joined us briefly to chat and cheer us on!

— Bob (the RBA for the Santa Rosa Cycling Club) has a big, booming laugh, followed closely by Denise, then Ann. You could always tell where that trio was by their laughter!

— I started fending off a bad headache at this rest stop, but decided to see how I felt after the 121 climb towards Napa. Perhaps Advil, two bananas and some pretzel roll would do the trick…

— Survived the climb and watched Patrick do his frenetic hamster spinning on his Gunnar fixed gear as we descended. But my ol’ nemesis, Silverado Trail, put the hurt on by blasting us with headwinds. The temperature started to drop and I could feel my energy flagging. We stopped briefly at a shop along the way, so I laid down, ate the last remaining bites of my pretzel roll and texted TBO to gauge his whereabouts in case I didn’t make it to Cloverdale.

— Bob turned on the tunes via his portable speaker to get our spirits up, and we took a quick break to marvel at the world’s shortest bike lane (it pointed away from the shoulder into a wall) and the blanket of beautiful California poppies that lined the road.

— Stopped in Calistoga for a snack at the “hippie mart” and bumped into the “Cluster Forks” team; they began their journey in Auburn but would be overlapping us along the way.

— Onwards towards Cloverdale. I managed to stay with the group for most of this section, but I could feel my energy slipping away and my legs turning into useless appendages. Congested rolled in like a big, stuffy cloud that enveloped my head. I started to drift back from the group on 128, and Patrick tried to reel me in as the light began to fade. I took more photos to try and distract myself from the dreaded fever-chills that were creeping in. As I thought ahead to riding all night in the cold evening air — which I assumed would make my malaise worse — I decided to bid farewell from the team in Geyserville and wished them bon voyage as they headed to the turnaround point (it took them just as long to get there as it did for me to reach Healdsburg with tailwinds. I was crawling…)

— I sought refuge in Safeway with a sad cup of chicken soup while I waited for the SAG wagon (TBO) to arrive. But my teammates successfully finished today (and this was Ann’s first Flèche!), so hurray — I’m glad they soldiered on to the finish!