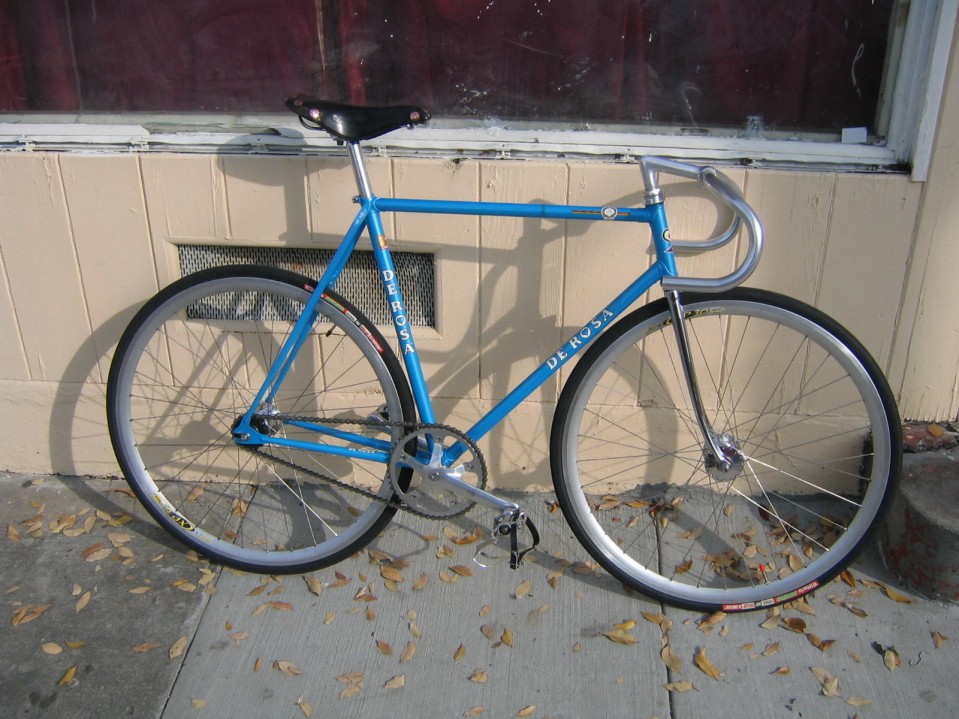 Bike thieves – they are the scourge of the cycling community. I recently had my mountain bike stolen, but it was miraculously recovered in just four days. Putting the word out online really helped with its return, and I’m hoping we can do the same for my friend Justin.

I asked him to email me the story about his missing bike and why it’s so important to him. We can all assign a monetary value to our bicycles, but as you know, its real value isn’t about its price tag.

“Here’s the story of my favorite bike ever. A 1980’s De Rosa Super Prestige pista. I purchased the bike from a gentleman on eBay in February of 2005. It was impeccable. Brand new. Mint. Not sure if the guy ever rode it. I took photos of the unopened box after the UPS man delivered it. Then I took photos of me opening the box, and pulling the frame out. I had never been so enamored with a bike. I was in bike love. All those years of staring at old De Rosa catalogs on the bulgier.net website, and now I had one, a perfect one. Not only was it a De Rosa, it also had an ornate decal celebrating a variety of Eddy Merckx’s victories on the top tube. “Incredible”, I thought. The bike was outfitted with Campagnolo’s C-Record pista group and Cinelli bars and stem. It was 100% Italian. I rode it at Hellyer, I rode it around SF, I rode it everywhere.

In August of 2006, I moved to New York for a short time. Knowing full well that bike theft was rampant in the Big Apple, I opted to leave my De Rosa behind in a storage locker I had rented. I thought, “it’ll be safe here”. Now in New York, with fall approaching, I sent my wife (then girlfriend) to my storage locker to fetch a heavier blanket for me. She called me from the storage locker, “Justin, there are 2 locks on your door, I only have the key for one”. Why were there 2 locks on my storage locker door? “There must be some mixup,” I remember thinking. My wife fetched a Public Storage employee to ask about the additional lock. He explained to her that they put an extra lock on because they found my door open. THEY FOUND MY DOOR OPEN!? WHAT!? Why didn’t anybody call me? She finally gets into my locker, and it’s worst case scenario. Everything is gone. Computer? Gone. Records? Gone. Guitars? Gone. DE ROSA!? GONE. **An important side note to this was that, just a few months earlier, my band, Film School, had our van stolen while on tour in Philadelphia. All of our gear was stolen. One of the basses that the thieves took from my storage locker was the replacement bass from the Film School theft. I’d just been kicked in the nuts…TWICE.**

I frantically called friends, posted on message boards, put up fliers, talked to messengers, filed a police report, complained to Public Storage, posted on craigslist, etc. I was optimistic I’d find it. I thought there was no way a bike of that caliber could stay hidden for that long. I setup an RSS feed to notify me anytime something with the word De Rosa was posted to craigslist. I did the same thing on eBay. I did everything. It never showed up though. It was gone.

Then, a few days ago, a random stranger on the San Francisco Fixed Gear message board sent me a craigslist link. It was a De Rosa, blue, same color as mine. It had the same nicks on that incredible Eddy Merckx decal. It was my bike. I emailed the seller in hopes of buying it back, but received no response. The ad has since been pulled, and the bike is gone, again.”

We’ve already started to put the word out in the Portland cycling community. Several friends of ours who live in Portland have already alerted their colleagues, co-workers and the media. But we also need your help getting this bike back! Share this post, be on the lookout wherever you go — bike shops, flea markets — and online. The De Rosa couldn’t have strayed too far as it was just sold last night via craigslist. We hope with your help that Justin might finally be reunited with his beloved bike.