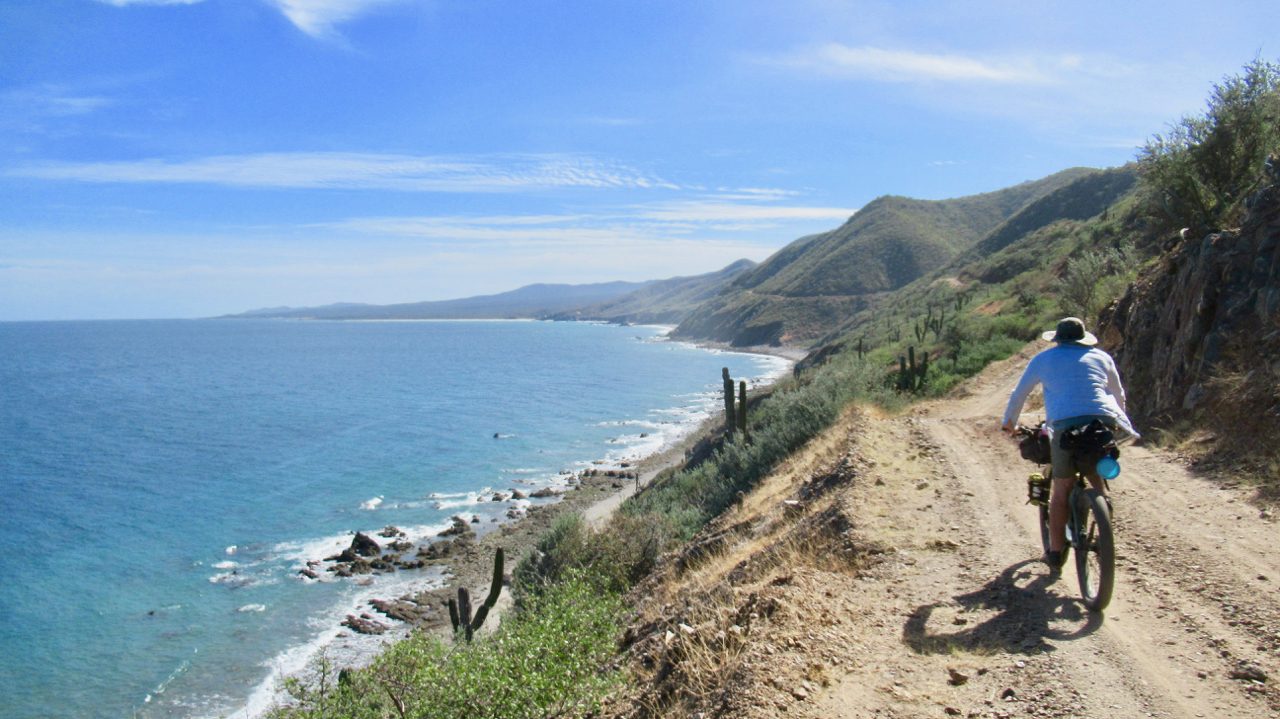 I love the ocean, but I’m not one to lounge around on the beach for hours upon end. Even while holding a good book in one hand and a cocktail in the other, I’m far too restless to spend a whole day lazily soaking in the sunshine.

So when my new friend Zach mentioned to me that he and Ryan — I’d just met both of them back in the summer of 2018 while in Seattle for the most recent BQ Un-Meeting  — were planning on riding a portion of the Cape Loop section of the Baja Divide over the winter holidays, I asked if I could tag along for their adventure. This was more my idea of a sun-filled vacation: riding my Moots with friends for a whole week down in Mexico!

Several months passed, more invitations were extended to friends, much planning over the Internet ensued and finally — we had a fine group of six on board: Zach, Ryan, Andrew and Cale, all from Seattle; and two Bay Area folks, Eric and myself.

In the end, we’d complete around 170 miles of the epic 1700-mile original course due to our time constraints (Zach and Andrew added on a bit more after most of us returned home as they tacked on a trip to Todos Santos.) But it was one of the most beautiful rides I’ve ever had the privilege to pedal through –– and my longest bikepacking trip to date.

Our “Cape Loopers” chronicles began on the afternoon of New Year’s Eve, when we all flew from our respective cities into San Jose del Cabo. Most folks come here to do the aforementioned relax-on-the-beach thing as there’s a whole strip of fancy hotels that stretch down the coastline. As a result, there’s a pretty heavy touristy vibe in some neighborhoods that make you feel like you’re visiting any other generic resort town. (The outskirts are far more interesting, in my opinion. And I’m betting that SJD is gradually going to see more and more dusty cyclists with fat tired-bikes rolling in as the route grows in popularity.)

We all convened at The Cactus Inn, an affordable, modest hotel which is conveniently located right near the airport and a regular starting point for Cape Loopers. Plus they offer a free van shuttle to and from their place for their guests. Granted, it’s not the most luxurious of accommodations, but the hosts are super friendly and helpful. (And I much prefer low-frill digs when I’m traveling unless it’s a special occasion, especially if I’m parking my bicycle in my room.)

Eric and I were the last ones to arrive, and we found out that — sob! — Ryan’s derailleur hanger had snapped in two en route. He, Zach, Cale and Andrew were scrambling to find a solution at a local bike shop (as none of us had thought to bring spares … lesson learned), while Rob and Leigh (from Alaska) were putting the finishing touches on their bikes. They were planning on riding the full Cape Loop to celebrate their recent nuptials.

Once Eric and I assembled our rigs, we headed into town with Rob and Leigh to grab some dinner. Zach and Andrew later joined us, with Ryan and Cale hanging back to work on their bikes. I didn’t take any photos of our dinner, but we all ordered drinks — including some tasty margaritas — and platters of delicious tacos. I was a little surprised when they were served plain — just tortillas and a plank of fried fish — but you had to go to a separate salsa bar for toppings (which is much better than how they’re served stateside since you can control exactly how much you want to add to your dish.)

Then we loaded up on snacks and water at the local convenient store, then proceeded to pass out early (well, some of us did — some of us were apparently kept up by late night New Year’s Eve revelers well into the morning…)

After unsuccessfully tinkering with his bike for several hours, Ryan decided to call it quits and head back to Seattle the next day. (He’d hoped to celebrate his 40th birthday with this trip, but figured it would be better to try again another time than risk his bike having any more issues.) Andrew, Cale, Eric, Zach and myself piled into a rental van that would take us north up to La Paz, then we’d ride south along the eastern coastline back to the San Jose del Cabo.

Sadly, I did a terrible job backing up the photos that I took on this trip — so half of the images are now only available in a very low resolution. So I’m not including all of my favorites here, and this is a more random sampling of our journey.

– The weather was perfect: no rain, not too hot (except for the last day which coincidentally had most of the climbing during our trip) and ideal for wearing tank tops, jorts and spontaneously jumping into the ocean for a swim. There were a few instances where we had to battle the wind, but overall, we couldn’t have asked for better conditions for our adventure.

– We probably had some of the best meals I’ve ever had on a bikepacking trip. If we weren’t eating the most delicious, cheapest, fresh fried fish tacos at a local restaurant, we’d stop at a local market and stock up on tortillas, refried beans that you’d squeeze out of a bag, cheese, avocados and tomatoes for a simple yet tasty lunch or dinner. Water was never a concern, too, as the route took us through plenty of small coastal towns where we could buy whatever we needed. And on our final day of riding, a truck had accidentally dumped a bunch of sweet cherry tomatoes all over the dusty road; Eric and I scavenged as many as we could and added them to our lunch!

– With the exception of one night where we splurged for cabana accommodations in La Paz (since the local campground was full) — we’d stealth camp on the beach. Sometimes we’d get tips from locals (one night we even received a truck escort to a decent spot). Other times, we’d just scout out a quiet, more remote place to pitch our tents. In one little town (I’m guessing it had a population of 20) — Eric and I slept in a playground (the only area not covered in goat poop) and the rest of the crew set up camp in a roofless, open-air church (also mostly free of poop, and they had the blessing of the proprietor of the town’s only store.)

– The scenery was absolutely breathtaking, especially the Sea of Cortez coastline between La Ventana and Los Barriles. I remember when we rounded one corner and the brilliant blue ocean burst into our view (featured in the above photo) — and I was in awe at the sheer beauty of the landscape before us. I hope to return someday to ride more of the Baja Divide …