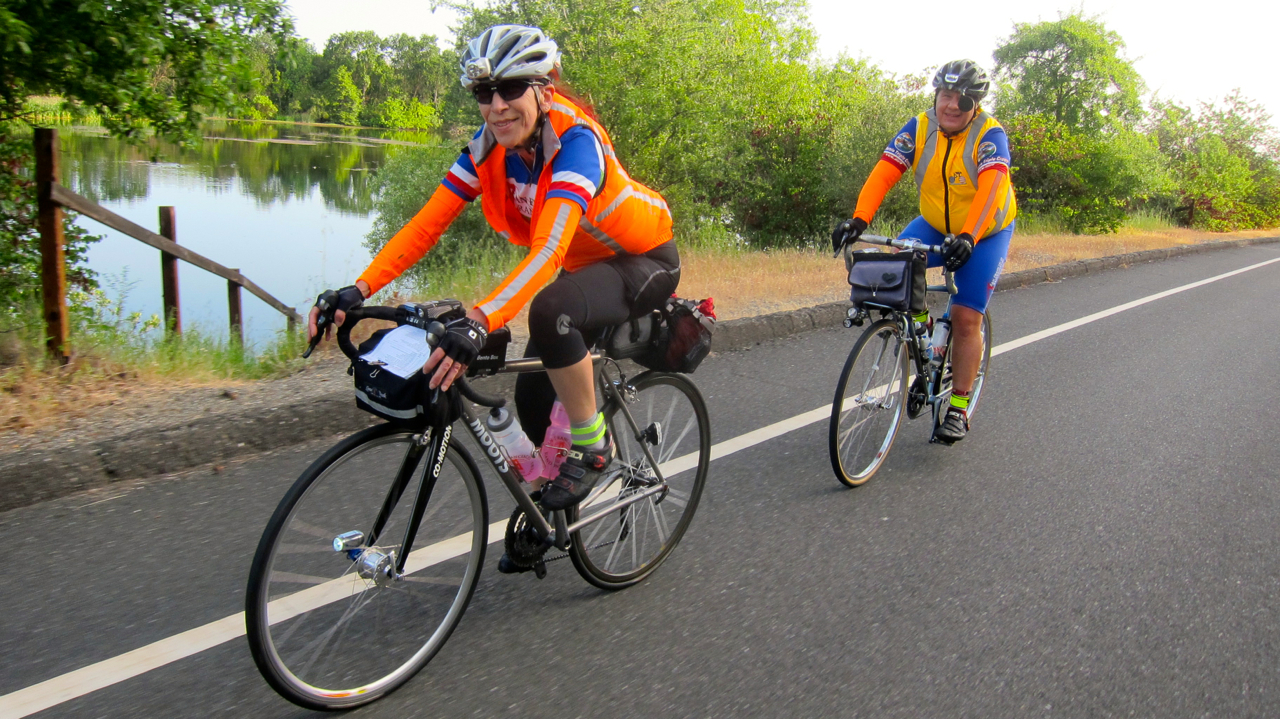 My ongoing quest to finish the Davis Bike Club’s brevet series continued this weekend by riding their Lake Sonoma 400k. Denise said she was game to go for her first 400k ride — and fresh off of her first 360k ride with our team flèche event from two weeks ago — so I was stoked to be riding with one of my favorite cycling gal pals. And we weren’t the only SF Randonneur folks in attendance: Andrea, Deb B., Clyde, Francisco, John G., J.T., Kaley, Kitty, Lisa, Max, Metin, Phil, Stephen, Tom, Yogy (I’m sure I’m forgetting some folks — say hey in the comments, please!) — plus our Davis friends Drew, Matthew and Julie were there also.

After a restless night of sleep at my friend’s place in Davis, it took a while for my engine to rev up to a decent pace. (I’m now debating the merits of staying close to a ride’s start but dealing with the unease of sleeping elsewhere, or waking up early and driving to the start with less sleep in the bank. At least you can potentially enjoy a more refreshing night of rest and the comforts of home.)


So we’re motoring along the usual flats around Davis when suddenly, H E A D W I N D S. I should have known the Headwinds from Hell would be back, since we were re-tracing much of the route from our flèche. It’s not a fun way to kick off a long ride, and later on we realized it would end up being 130 MILES OF UNRELENTING HEADWINDS, with only a few pockets of respite here and there. I was still able to appreciate the scenery along the way — at least, when I wasn’t gritting my teeth and shaking my fist at those damned headwinds.

After joining a few random groups of riders just outside of Davis, Denise and I teamed up with John Guzik and rode through familiar territory past Lake Solano, Pleasants Valley Road (where Deb Ford greeted us with a secret control; it was nice to finally meet her in person, too!) and Wooden Valley Road. One new climb to me was the short, steep Wildcat Canyon climb on CA-121, which offers lovely views of Suisun Valley wine country.


Denise and I got separated from John, and as we were unfamiliar with the route, we zoomed right past the second control. But Denise had an inkling we just missed it, so we spun around and saw the volunteers waving at us. Tuesday, Drew’s girlfriend, was as sweet as could be and chatted with us about her new bike.

After a quick snack, we headed back onto the road for another demoralizing session of pummeling from the fierce headwinds. Sage Canyon Road and Lake Hennessey awaited us, then our old “friend”, the Silverado Trail. There were a lot of other big sporting events happening that day and the road was crowded with cars and athletes. The Wine Country Century and Tour de Cure were in full-swing, and some long-distance relay running event was in progress; the competitors were running in teams from Calistoga to Santa Cruz! Anytime a spasm of misery invaded my mood as we slowly slogged along the noisy and windy Silverado Trail, I’d look at one of the runners and think, “Well, at least I’m not doing that.” (I’m a terrible runner and could probably manage to run a mile if a honey badger was chasing me.)


Time for more food! I’m always grateful for the zen-like patience of the volunteers who check in the herd of hangry cyclists that show up in a slightly addled haze from fatigue and hunger. The impeccable service they provide in making us sandwiches, loaning out tools, offering lawn chairs for our tired tuchuses — it’s truly appreciated.

With just another 33.4 miles to the turn-around control, we were motivated to move as fast as possible — although at one point, the winds and sore feet got the best of us and we took a short break before reaching the fourth control at Lake Sonoma park. There was a second info control we had to visit before we checked in (the first one was early on just outside of Davis), and another rider advised us, “It’s just up half a mile on the left, you can’t miss it.” Denise and I headed in that direction, saw we had another climb ahead of us before we could rest and both said, “Ughhhhhh!” as we shifted into our granny gears.

Greg W. passed us on his way down with a smile and I thought, “Oh, it should be right ahead as he was just in front of us.” About a half-mile in, I didn’t see a cone. We kept inching our way higher and higher — still no cone — and I said, “This can’t be right.” I consult my phone, we’re definitely over a half-mile at this point, but we venture a little further. “I can’t believe they’d be so cruel as to make us do this climb right now.” We go even further. “[insert colorful string of expletives].”

We finally reached the dam, saw another wall of a climb ahead of us, and Denise said, “Ummm…no. We’re going to have to beg mercy from the court at this point.” We checked our brevet cards again and noted that it was at the intersection of Higbee and Skaggs (another hellatious climb), but alas, there was nothing there. Just as we reached the end of our descent, we saw the Davis RBA Dan Shadoan parked on a tiny side street with his car and he waved at us as we flew by. I had a sinking feeling that was where the cone should have been. Sure enough, after we pulled into the control, we learned the cone had been kidnapped. ARGH! We lost about 40 minutes to our fruitless search, but I did take some comfort in the fact that we weren’t the only ones who had made this mistake. (Tom, Kaley and Steve had actually climbed up twice looking for it!) And Greg told us later on that this had happened to him as well the first time he rode this 400k. Apparently this particular info control cone has a habit of disappearing. Anyway, as consolation, Dan told us to write, “WTF!” as the answer on our brevet cards. Another thing that cheered me up was that Patrick had left smiley faces for me beside my name on all of the control check-in sheets (and incurred the wrath of one volunteer for futzing with the official documentation. Also, he was long gone by the time we arrived; Patrick, Max and his group were done with the ride in 13 hours and 36 minutes…so impressive!)

I was feeling pretty cracked at this point, so I did something I never do on a ride or otherwise: I drank a Coke. Normally, I avoid junk food like the plague. But ironically enough, although I’m engaged in a healthy pastime, on brevets I’ll eat chips, cookies, candy or anything that will give me a quick burst of fuel. And I sorely needed the sugar and caffeine, so I chugged it down with my sandwich before heading back to Calistoga.


Let me tell you — the combination of tailwinds and Coke was fantastic! We arrived back at our fifth control in Calistoga in no time and I was buzzing with energy. And oooh, even better — there were rice balls. I inhaled a couple of those doused in soy sauce, downed another Coke and I was rarin’ to go. We teamed up with John, Tom, Kaley (on her fixed gear!), Steve, Drew and J.T., and proceeded to rocket down Silverado Train like a bullet train. Unfortunately, I was so hopped up on my soda drugs that we accidentally dropped Denise and John. I stayed behind at the Sage Canyon Road turn-off to regroup with them. Denise appeared shortly thereafter, and we managed to catch up to the rest of the gang on the Lake Hennessey climb. (I enjoyed pedaling through this section sans stomach cramps; the last time I rode through here in this direction, I had greedily eaten too much pizza from Model Bakery and paid the price.)

We stuck together and our lively banter and steady pace kept us moving along. Riding in a large group during a brevet really makes a difference in forging ahead, especially at night. You move faster and more efficiently, the conversation keeps you alert and engaged, and the pressure to not slow down the pack allows you to survive conditions you wouldn’t otherwise when solo. I was dying to use the bathroom but the next control was 20 miles away, so I decided to see if I could just wait — telling myself it was good exercise in restraint — so that we wouldn’t all have to come to a screeching halt. And Clyde, who regretted not putting on his windbreaker to stave off the chilly evening air when he had the chance, waited up until the very last moment when he couldn’t endure the cold any longer before pulling off to the side of the road to grab it from his bag (and then chased us to get back into the group.)


We rolled into our last staffed control of the night at about 11:30AM, and we all huddled around our warm containers of Cup of Noodles. This was actually the first time I’d ever tried one, and Denise said, “You obviously haven’t done any double centuries!” (Which is true — I’ll actually be doing my first one later this month: the Davis Double!)

The remaining 31 miles was a grind: a mix of undulating rollers outside of Vacaville, then the farm flatlands outside of Davis. We just put our heads down and pedaled with purpose, and that lingering moment of silence washed over our group when all conversation has run out, we’re focused on the task at hand while trying to forget our aches and pains, and our minds are drifting to all sorts of random thoughts. All you could hear during our quiet lull was the sound of our drive trains whirring along in the night as we made our way eastward. And then…there was the welcome sight of the Mace Blvd. Park n’ Ride sign. Just like that, we were done at the pre-dawn time of 4:00AM.

Congrats to Denise on completing her first 400k! She persevered like a champ. And high fives to the “Magnificent Seven” crew, as Clyde dubbed us, who rode with Denise and I from Calistoga to the finish. It really made our ride super fun as we rode the tailwind express back to Davis. And kudos to Dan and the Davis Bike Club volunteers for organizing another outstanding event!