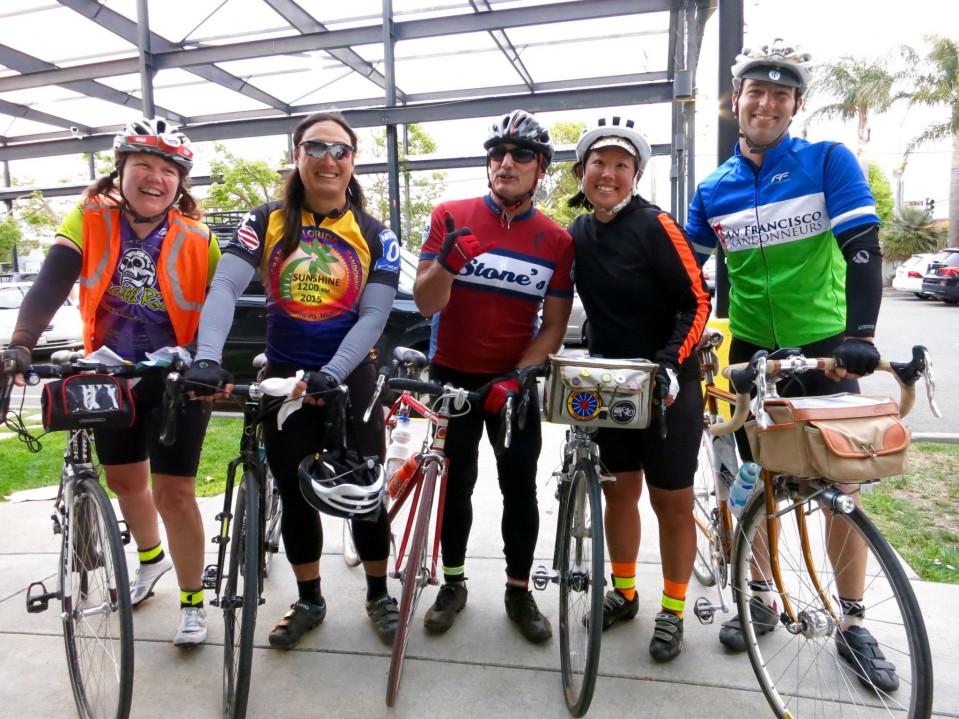 On Wednesdays evenings after work, a group of us East Bay folks regularly get together for a jaunt up into the hills followed by dinner. This outing is called, “Ride to Eat”, appropriately enough, and this year I volunteered to captain a DART team with members recruited from this circle of cycling friends.

The original group consisted of Ann, Bryan, Jason and Denise, but she had to bow out due to a conflicting engagement. So Michael Melville, who’s been biking less as of late as he’s turned his attention more towards stand-up paddling and other watery adventures, stepped in to take her place. Here are some of the highlights:

–Our route started at a Starbucks in Emeryville (just a few blocks away from my home, one of the pluses of being a captain!). It’s a modified version of my first attempt at leading team (and I was terrible at it) with several non-rando friends (who weren’t used to the format.)

–Not too long after, despite the fact that Pudu delayed us for 20 minutes for a HPT-session (‘happy poopy time’) in Jack London Square — we still made it to our info control on Bay Farm Island with plenty of time to spare. He also gave us TMI about said HPT because he’s Pudu.

–The first section of our route hugged the Bay Trail, which has some fun gravel-grinding thrown in near San Leandro. We wove through the marshlands under cloudy, cool skies until we turned off at Fremont.

–We passed through the tiny town of Niles (which was a first for all us) and spotted Team “The Islanders” (Keith, Kley, Theresa, Stephen and Brooks) at their control at Mission and Niles Canyon Roads.

–Our first receipt control was in Sunol, where the Islanders whizzed by us as we stopped for a short snack in the sunshine.

–Then it was onwards to the Iron Horse Regional Trail in Dublin; we rode the entire 32-mile path to Concord (and I think I was the only one on our team who’s done so. We took one wrong turn but got back on track shortly thereafter.) And with plenty of time on the clock, we stopped for a short pit stop at the cycling-haven in Danville — Peet’s — so Ann could adjust her cleat while the rest of us sipped on iced tea.

–Concord was our lunch stop, where I’d picked a delicious BBQ place for folks to sink their teeth into ribs and mac n’ cheese and hot links. (I firmly believe we should eat tasty food on brevets whenever possible. But sadly, I’m on a detox regimen at the moment so I had a veggie sandwich of all things.)

–After that feast, everyone was in the mood for a mid-afternoon siesta, but the group pushed on in some headwinds towards our first bridge crossing to Benicia. Bryan picked up a goat head along the way (perhaps he’d angered the rando gods by remarking earlier how his tires had gone flat-free for months), so we stopped for a quick repair. Pudu had a front brake mechanical that he mostly sorted out, which was probably due to the fact that he hadn’t looked at this bike since the last time he rode it (judging from the layers of mud caked on the frame.)

–The group loved pedaling through Benicia, a lovely little town nestled on the shore just east of Suisun Bay. I’ve spent several afternoons there, walking through the historic main street and strolling along the waterfront.

–We had some tedious miles to pass through Vallejo to ensure our route totaled a 200k; on the climb up Columbus Parkway, we saw Team Dendrobatidae (Rob, Drew, Erik, Mark and Todd) fly down the opposite direction!

–Our group swung around back south near the former naval shipyard of Mare Island before crossing back over the Zampa (Carquinez) Bridge.

–I saved all the climbing on the route for the end, starting with a series of rollers on San Pablo. At our penultimate control, Mike shared a tall can of PBR with the group to give us fuel for the ascent up to the foggy ridge via Arlington. It’s got some steep kickers in there, but it ends with a glorious descent down to the Marin Circle, our last info control.

–Our final tally of city limit sign sprints was me (5); Pudu (4); Bryan (3). But Pudu insists it was a tie since he also scored a county limits sign, which I don’t think counts (I think we should run the game as the North Carolinians do; they subtract a point for every county line sign…)

–Kudos to Ann for completing the route despite a cold and to Mike, who had just 90 miles in his legs this past year — now he’s got over 200!

And thanks to my team for being fantastic company all day and helping me to redeem my captainhood by successfully finishing at Pyramid Brewery in Berkeley! 18 other teams with 83 riders total packed the patio, swapping stories over their burgers and beers.