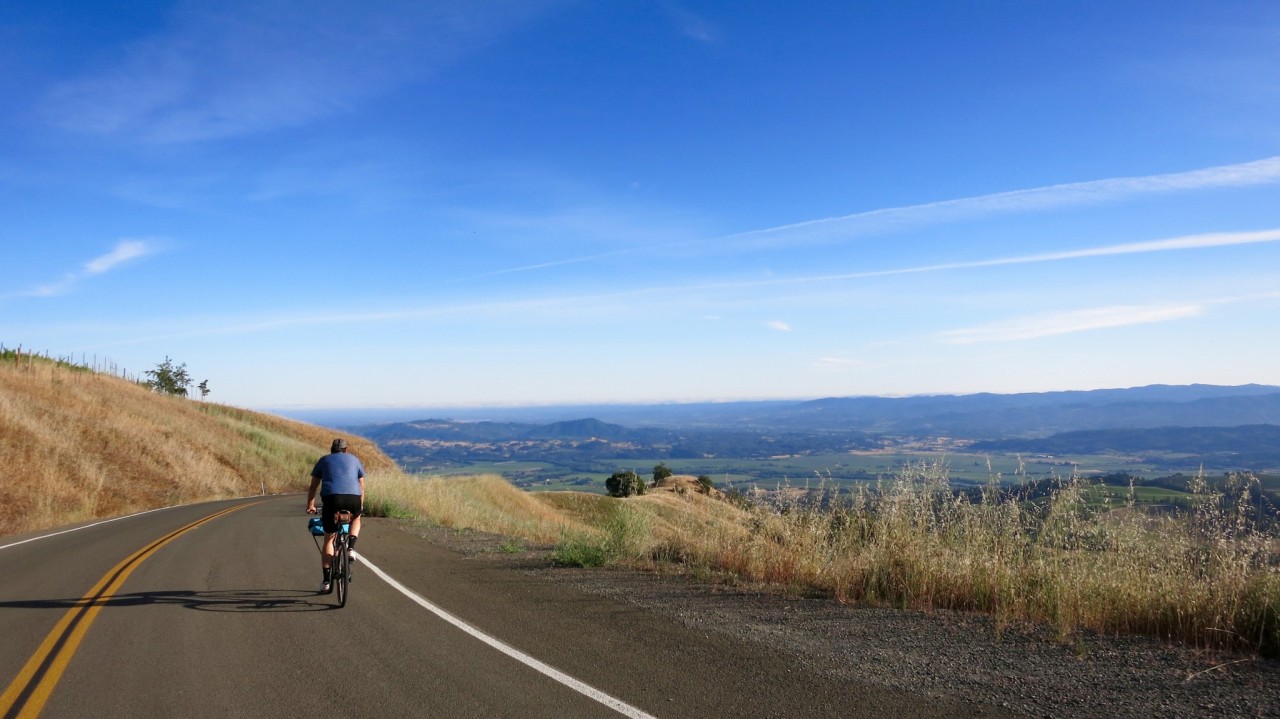 So…where to ride on my first “longish” bike ride after the Sunshine 1200k? We got up too late for the Meet Your Maker shindig down in Santa Cruz, so we narrowed it down to two choices: mixed terrain fun near Mt. Vision or one of Santa Rosa Cycling Club’s, “10 Great Rides” — the “Geysers.”

We left it up to fate and flipped a coin: and she said, “You will ride the Geysers today.” We checked the temperatures and Marin was going to be in the 50s while Healdsburg (where we started and thus added about 10 more miles to our total) would hit a high of 80. (But we really should have seen what Cloverdale had in store for us, as it was over 10 degrees hotter — and that’s where the misery really began. The SRCC’s website warns: “It can be brutally hot in the warm season.”)

Our ride began rather auspiciously, with a relaxing cappuccino at Flying Goat, followed by a wine tasting at the picturesque Dutcher Crossing Winery (love their penny farthing logo). But then it was time to be slow-roasted over the Geysers spitfire…

I won’t say much about the route as the SRCC did a fantastic job of describing the three main sections of the ride that rambles forth on Geysers Road. The highlights include pedaling along the scenic Sulphur Creek Canyon and the historic bridge that dates back to 1909. But oh, when we took that right turn to begin the 1.5 mile climb that kicks up 750′ with average grades ranging between 15-18% — that was pure misery. I’d already had a bad migraine from the heat, but now nausea, bonking and chills set in. I had to stop, walk and take breaks in the shade when possible. TBO had gone on ahead (using his granny gear) and at the first summit, just laid down on the ground, surrendering to the shittiness of that climb. Some folks driving by stopped and asked him with panicked concern, “Are you OK?!?”

More climbing awaited us and by this point, I was seriously over it. I couldn’t believe this dry California heat was so debilitating — to the point I was actually feeling nostalgic for the Sunshine 1200k’s humidity! Crap. But a little bit more walking and crawling along did the trick until finally the temperature started to drop and at last, we hit the long, rewarding 5-mile descent that gives breathtaking views of Alexander and Russian River Valleys (I didn’t even mind the gravel patches and cattle grades that interrupted it.) At least we didn’t run out of water!

When we reached the city limits of Healdsburg, we were ready to eat anything and everything and stopped at the first Round Table Pizza we saw. FOOD! Our humanity was restored.

I might like to go back and climb the Geysers again someday — but only when it’s cloudy and cool, like, “Hey, it’s chilly, time-to-put-on-a-wool jersey” weather. Otherwise, it might be one of those “one-and-done” rides for me…