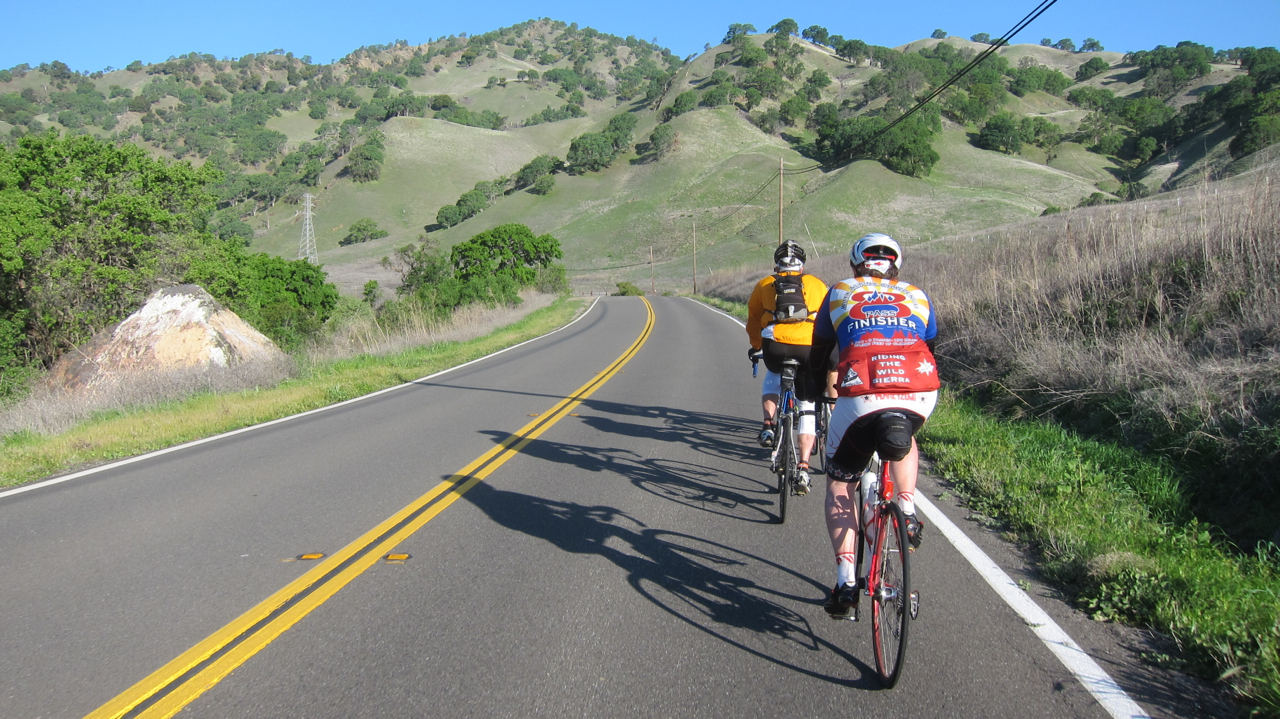 The Davis Bike Club’s 300k was my inaugural ride with this group — and my longest ride for this year’s training season to date. I’d been riding a ton of 200k brevets and permanents in preparation for the longer events looming before me on the calendar. With all of those miles in my legs, I felt ready to tackle this 186-mile out-and-back ride which starts in Davis and heads northwest to Cobb Mountain, the turnaround point.


I stayed at a friend’s place in Davis just 2 miles away from the start the night before, so I was able to roll out of bed just a half-hour before I checked in. There were quite a few familiar SF Randonneur faces there — Deb, Jesse K., John G., Kaley, Martin, Max — and I met our resident Conspicuity Czar, Jack Holgrem, for the first time. (He was as dazzling as ever in his neon gear.) After a few welcoming words from the Davis RBA Dan Shadoan, we rolled out for a speedy start from the Mace Park n’ Ride lot out to the flatlands of farm country.

The lead group bolted away at 20+ miles an hour right at the get-go. Not wanting to burn all of my matches at the beginning by trying to hang with them, I dropped back to a more manageable pace. I found a comfortable draft with Aaron, another SFR rider that I hadn’t seen since last year in Marin. We were soon joined by a smaller group led by Ken, then another pack of riders enveloped us along the way. Zooming past our info control at mile 16, we had a swift and steady paceline going until the first set of rollers leading up to the Monticello Dam climb. (I also had the pleasure of meeting two new SFR folks, Andy and Phil, two strong riders that recently started randonneuring as well.)


I formed a small climbing trio with two other riders, one of whom turned out to be Robin; we’d been trying to coordinate a rideshare via email which didn’t work out logistically. So we serendipitously became acquainted at the beginning of the ride as we’d stick together until the end. Robin’s new to randonneuring — he’d been introduced to it by his friend Jesse – and is slowly testing the waters to see if it’s something he’d like to pursue. As he loves France and lived in Paris for several years, combining his twin passions for cycling and the country would meld nicely with a trip to PBP.


I was starving by the time we reached our second control and couldn’t wait to dig into the buffet of delicious food waiting for us at check-in. Instead of having to contend with any hunger-haze-addled decision-making — which would usually strike whenever I’d walk into a Safeway at a control — I felt positively spoiled sitting in a lawn chair in the shade, sipping on V8 while chowing down on a peanut butter and honey sandwich graciously made by a volunteer. We were reluctant to leave, especially when John remarked, “The next 28 miles shouldn’t be on a brevet.” Robin turned to me later and asked, “What did he mean by that?” with a touch of concern in his voice. We’d soon find out on the Cobb Mountain climb.

After overshooting the turnoff to the climb by about 4-5 miles — we had made a quick water stop in Middletown and had missed the sign — we got ready for our slow, grinding ascent up to our third control. Many riders were already on their way back and were happily bombing down the mountain. Robin and I joked that we were happy to crawl along at 4 miles an hour, especially when we hit that 2-mile stretch of 11% grade. But we reached our next oasis intact and were ready for our second lunch. The awesome volunteers kindly made us more PB-and-honey sandwiches, and we sprawled out on the grass to unwind for a good half-hour. Julie, a rider from Sacramento, as well as another local, her friend Drew, were also there; Deb rolled up soon after. She had to deal with a mechanical early on in the ride and spent most of the day hammering solo to meet up with them. The control closed up several hours early as all of the riders had come in quickly, and the volunteers started to pack up their gear as Robin and I headed back to Pope Valley.


As we traveled back through the flats towards our penultimate control, Robin remarked that it always seemed to take less time on the second leg of an out-and-back course (especially when you have a thrilling descent down a mountain to kick things off.) Perhaps it’s knowing that you’re halfway done and you’re motivated to pedal faster to get home more quickly (that ol’ smell-the-barn-syndrome.) And now that you’ve ridden the same route, there’s no danger of getting lost.


Quite a few riders were enjoying the last refreshments before the last big climbs of the day. I discovered a container of rice balls which were exactly what I was craving — especially after showering them with a waterfall of salt — and I tucked one away for later. Robin and I headed out after a brief stop and were later joined by Drew, Deb and Julie on the road.

After tackling the final slog past Monticello Dam, we flew down Putah Creek Road. I believe it was around here — or shortly thereafter — that Drew took a poll on who wanted to stop for a beer in Winters. After being visually teased by the trompe l’oeil bottle tucked away in the back pocket of his Sierra Nevada jersey for the previous 20 miles or so, I eagerly shouted, “YES!” We managed to score seating in the back patio at the Preserve Pub and entertained our table mates with stories about randonneuring while we guzzled our tasty local brews.


Then it was just a fast 20 miles back to Davis. While folks took turning leading our rando train, Deb gets special kudos for providing us with an epic pull for most of it — she’s truly a super-strong rider! After a quick drive-by past our final info control at a church, we arrived back at the Park n’ Ride in no time. Thanks to Dan and his fantastic crew of volunteers for pampering us at the controls. The food and support were amazing and really helped us get through the ride — I have no doubt they probably arranged the spectacular weather, too. Congrats to Robin for finishing his 300k in sub-16 hours; he was hoping to get done in 18 and ended up crushing it yesterday. It was also wonderful riding together and sharing stories and suffering throughout the day. And a big thanks goes out to Deb, Drew and Julie for making the latter half of the ride so fast and fun. Looking forward to seeing y’all in the rest of the Davis series!