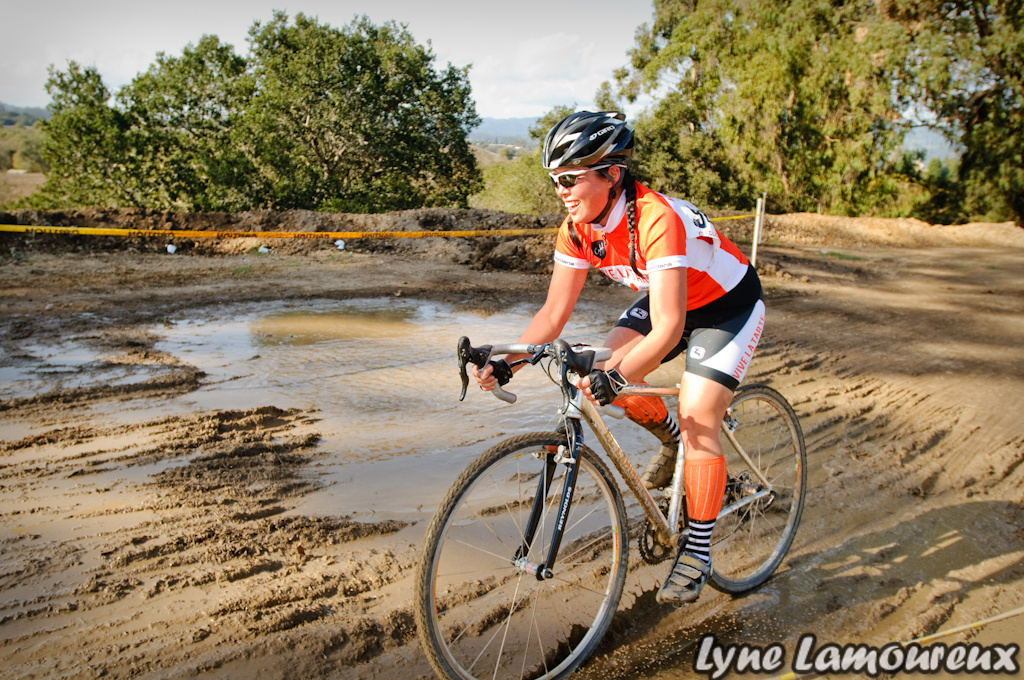 If I had told myself 6 years ago, “Hey Jenny Oh Hatfield*, in the future, you will be racing bicycles,” I would have laughed. Back then, I was still living in New York City. Riding a century within the confines of the five boroughs was my idea of an epic ride. I would have then said, “Not only will you be racing bicycles, you will be racing off-road. It will be dusty and dirty and occasionally muddy. You will encounter difficult terrain that consists of roots, rocks, sand and gravel. There will be steep hills you slog up and wooden barriers you must jump over. Sometimes, you will crash. It will usually occur in front of other people who will heckle you mercilessly. Your body will become a road map of pain that’s peppered with bruises, cuts and scars. And you will always, always, always be suffering.”

If I had heard that, my reaction would probably have been the following: But I would have also said, “However, you will have people cheering you on as you pedal past. Beer, dollar bills and sometimes bacon will be handed up to you to keep you going. You will have great teammates that will be your comrades in battle. You will dress up as a cowbell, a coconut cupcake, a bearded dude and Hello Kitty. And it will be always, always, always be fun.”

And so here we are in 2012, and somehow I’m halfway through my third season of ‘cross. Against all odds — as I was previously allergic to riding on anything but pavement — somewhere along the way, the switch was flipped. Now I find myself explaining to non-cyclists that I spend my weekends participating in a sport that can best be described as steeplechase on bicycles. They respond by giving me looks that alternate between horror, wonder and astonishment (which pretty much sums up how I feel while racing.)

This afternoon, I traveled with my Missing Link gal pals, Ulrika and Ariel, to the Santa Cruz County Fairgrounds, the location of Surf City’s second race of their 2012 series. Surprisingly, it was another clear, warm Sunday afternoon. It seemed as if the winter monsoon season was upon us as it had been pouring down rain the day before and more had been predicted. But the cyclocross gods decided to grant us a reprieve and bestowed us with a gift of more sunshine — though they did give us a generous serving of mud to play around in during our race. Granted, it wasn’t Super Prestige-esque mud, but it was sloppy, slippery mud nevertheless.

When I lined up at the start with my B’s women, I noticed that there were only 9 of us in our category — which meant I automatically had a top ten finish without any effort — woohoo! (I know, it doesn’t really count, but I’ll take what I can get.) But could I also get onto the podium?

The first 30 seconds of my race didn’t go well. I bobbled my start and had trouble clipping back into my left pedal. The field started to zoom away from me as I spun in the gravel for a bit before I was able to get back on track. Then I approached the only section of the course that I was dreading: a sloped, muddy descent that led to an off-camber run-up with barriers. During the warm-up, I wasn’t sure which line would be better. I decided to take the higher line and hope for the best. Success! I made it to the barriers intact. This was how I felt on the inside: (This is Kurt, who was dazzling the crowds with his disco ball head.)

While I then proceeded to make the ugliest, slowest, most ungraceful dismount in the history of cyclocross, I was just relieved that I wasn’t rolling down the hill in a avalanche of shame.

After splashing through a gigantic mud puddle, a large portion of the course was flat. Here was where I was able to motor on through and make up any time I lost in the muddy sections. I played cat-and-mouse with a woman on a mountain bike for most of my fourth lap and was able to pass her in the final lap (thanks to Lee Slone for telling me to pass her because it made me get my ass in gear.)

In the end, I placed 6th — just nudged off the podium by my speedy doppleganger May Woo. But I was pleased with the steady improvement I’m seeing in my bike handling skills, and was supremely glad that I didn’t eat any shit (which in this case, would literally have been horseshit since we rode past a few stables.) Let’s hope we get more rain for our next races! *I would have also laughed at the fact that my married name makes me sound like I’m Irish. But strangely enough, my initials have remained the same!