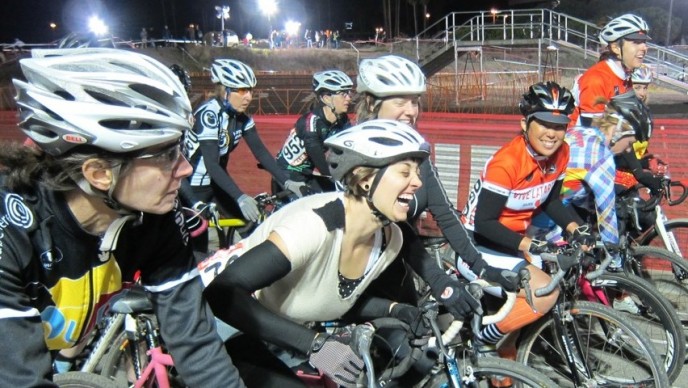 Winter finally descended on the Bay Area tonight — despite the fact that we were teased with several 80-degree days earlier in the week — and temperatures dropped to sub-50 degrees this evening. For us soft folks of NorCal, this meant that everyone at the race tonight was drinking heavily and dressed like they were in Portland. (Notice all of the wool hats and hands hiding in pockets in the crowd.) But there’s no incentive like chilly weather to race as hard as possible in order to warm up quickly, so I was rarin’ to go by the time 6 o’clock rolled around. The Bearded One snapped a photo of me at the start of the Women’s B Race where I’m lined up near my friend Sam “Bangable” Bell of Team Jortz. (She’s the one laughing hysterically in the foreground, a typical state of being for Sam.) With the exception of Sam and my other friends Jenn and Laura, everyone else is wearing their serious race faces. (I’m wearing mine, too; as you know, my happens to be a perma-grin that I can’t seem to get rid of.) I really love racing at Sierra Point because a) we’re racing at night, which sure beats racing early in the morning (and makes drinking lots of beer more time-appropriate) b) it’s a mostly flat, fast course which means there’s less potential to crash and our suffering is more minimal. This less technical course also tempts lots of roadies in off-season mode to try their hand at this crazy sport. The potential for entertaining heckling is increased exponentially as they tentatively make their way around the dirt. (You can easily spot them by listening for the sound of their canti brakes squealing loudly on the descents.)

Speaking of heckling, we were graced by the presence of the one and only Rand Miller tonight. (You know, the I’m-grabbing-a-dollar-out-of-Jono’s-neon-green-Speedo-guy.) While he may be retired from racing, he was in fine form on Hecklers’ Hill during the Category A Men’s race.

And Team Jortz, who have the classiest asses in the Bay Area, put them to work delivering cash to the Cat A men. Look how patiently Sam waits with the dollar tucked in her Jortz until some guy decides to sacrifice some time to make himself a little richer.

One Rock Lobster scored two dollars in a row from Sam and Liza Rachetto, and even gave Liza a little grateful spank in return:

The guys got in on the ass-action, too:

(Sadly, I wasn’t able to get any money or beers during my race. I did get lots of cheers and heckling about stolen bicycles, though. And I have to say it’s a pretty surreal experience to hear your name yelled over and over again as you’re racing; it’s as if you’re trapped in some bizarre echo chamber.)

And now back to my race report: I came, I raced and I played a fun game of cat-and-mouse on the course with Jenn, Vanessa (my Jortz nemesis) and Laura. I felt fast-ish during the race, but in reality I was 18th overall (the-old-perception-vs.-reality-trick.) I should mention one memorable moment when a woman chopped my wheel rather aggressively right before one of the short climbs and this post came to mind from my new favorite blog, #WhatBikeRacersShouldCallMe, when it happened. I only wish I had said it out loud. Lessons for next time…