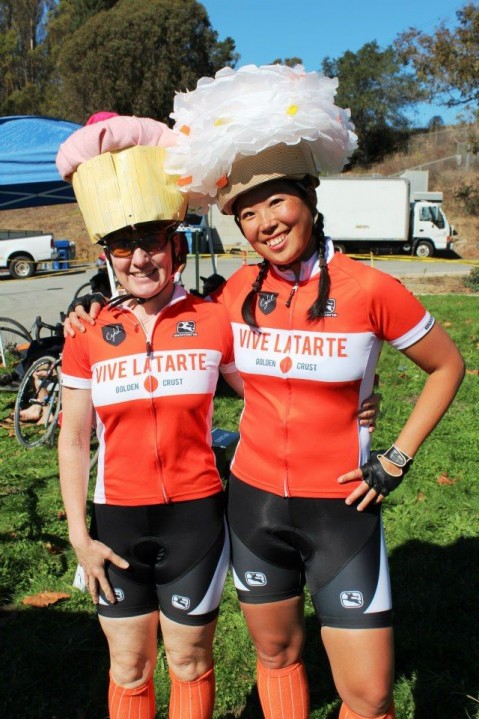 My race report can be summed up in a few words: cupcakes, heat, stairs, singletrack, beer and suffering. It was close to 80 degrees today at Aptos High School, where Surf City Cyclocross hosted the first race of their series (and I recently learned that it’s the oldest cyclocross series in the U.S.) My teammate Bridget and I dressed up as cupcakes (she was strawberry-flavored, I was coconut) in honor of vive le tarte, a Belgian pastry catering company based in SF that co-sponsors our team. As we were planning on skipping the costume race, we decided to just wear them during our main race — which probably wasn’t the wisest decision. Cupcake heads are definitely not recommended if you’re doing a challenging course like Aptos. Filled with gravel, sand, steep stairs and a 1000 ft. descent of narrow singletrack that bombs you into a sand pit (described as ‘treacherous’ by the organizers) — the course definitely posed some challenges to us as we wore our heavy, non-aero headgear.

I knew this race was gonna be gnarly — especially after a fellow B’s woman hit the pavement hard within the first 20 seconds of the race and I had to quickly hit the brakes to avoid steamrolling over her. I decided to employ some strategic tactics to survive until the end.

Step 1:Hydration. Just as I was ready to wring out my jersey and drink my own sweat due to the relentless heat, I spotted a hapless heckler enjoying his beer on the sidelines of one of the gravel sections. I didn’t think twice and stole it right out of his hand. He protested loudly while I darted away taking several satisfying gulps. To my great regret, I couldn’t down the whole beer and tossed out what was left in the cup. (I know, stealing and then wasting said beer is pretty poor form. Need more training in this department.) But somehow he managed to forgive me and gave me water and beer handups for the rest of the race. (Thanks, dude – this smile’s for you ! I think it was one of the SuperPro racers Chris DuBurg.)

Step 2: Stay upright. I didn’t want to crash on the steep singletrack or in the hairpin turns coming in and out of them. So I stuck my leg out and used it to pivot when necessary. While they weren’t the most graceful maneuvers – and my friend Hans was coaching me to keep my weight back and stay off the front brake instead of skidding through the turns – I managed to avoid crashing. Unfortunately, the course claimed some victims and there were quite a few yard sales today. I’m happy to have emerged unscathed.

Step 3: Slow and steady finishes the race. Today was probably the hardest race I’ve ever done and it certainly was my slowest. I was lapped by several elite women and passed by my teammate Laura (who placed second today in her C’s race and has been killing it all season). But I was motivated to keep going with all of the “Go, Cupcake!” cheers that greeted me at every turn. And finishing is better than DNF and makes the post-race beer taste even better.