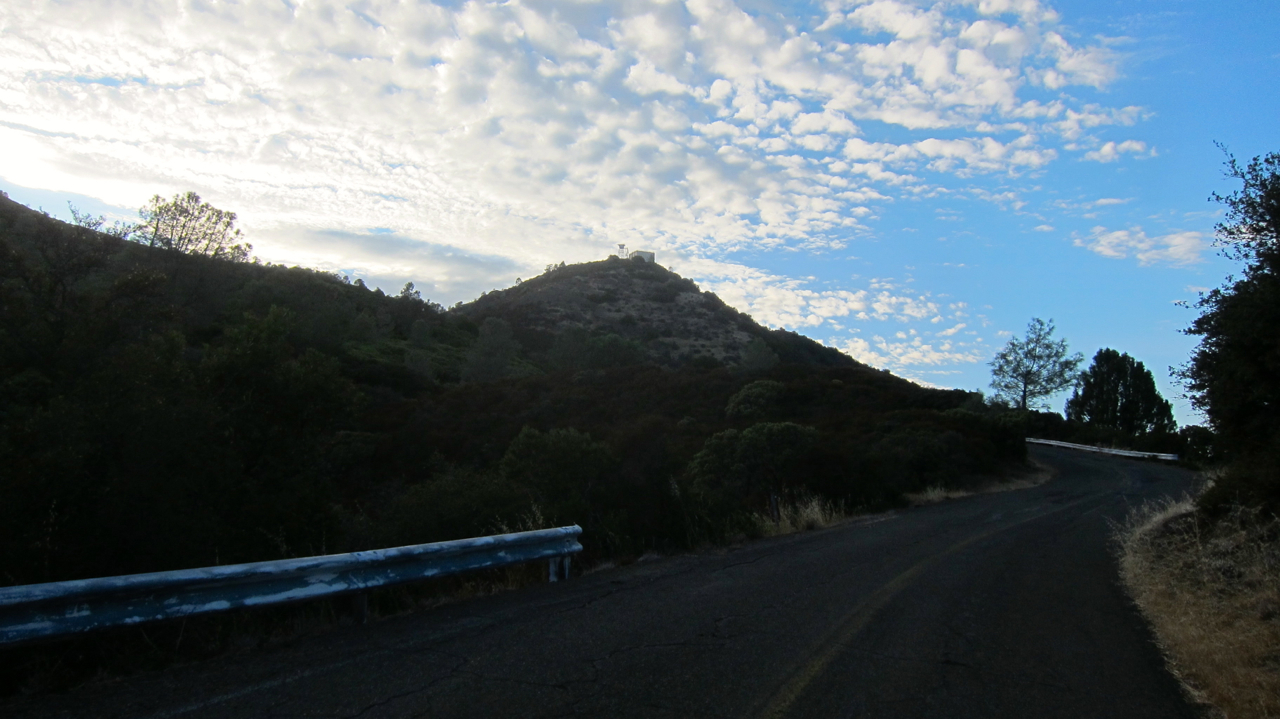 There’s still quite a few climbs on my Bay Area bucket list, but today The Bearded One and I were finally able to cross off Mt. Umunhum. Bridget and Neil were headed down to San Jose for the weekend, so we led them down the Bay Trail on the East Bay side with Pamela accompanying us through Fremont. We journeyed from Temescal to Alameda, looped through the Oyster Bay and Hayward Regional Shorelines, then stopped for lunch at Banana Leaf, our favorite Malaysian restaurant in Milpitas.

After leaving Bridget and Neil in San Jose about 58 miles into our ride, TBO and I continued south towards Almaden. TBO grew up in this area, so he pointed out the places he used to fish, hike and swim as a kid along the way. (We even caught a glimpse of his old childhood home on Camden Avenue.)

I had mapped out our route so that we’d be approaching from the southeastern side — which I later learned is easier, according to Stanford’s list of rides near the university:

“The backside of Hicks is not as brutal as the front-side. Starting from the cattle grate, the road gradually steepens until it reaches 10% grade for the last 0.8 miles finishing at Loma Almaden Rd. and Open Space Preserve. The pavement is good, but the end is not immediately in sight.”

Unfortunately, 39/25 is as low as I can go gearing-wise on my road bike, so I slowly swerved my way up the 1.6-mile climb to the Mt. Umunhum / Hicks Road intersection. While the climb was definitely challenging, the worst part was being attacked by relentless swarms of mosquitoes and gnats. Trying to move forward on the bike while swatting at bugs at the same time was absolutely maddening. But at least we were starting our ascent in the late afternoon, so we rode along in the shade instead of roasting in the sun.

“Loma Almaden following the difficult climb of Hicks, presents a considerable, but worthwhile, challenge. The grade is quite non-uniform, with a section from approximately 0.5 to 0.9 miles approaching a 20% average grade. The pavement on this formerly restricted federal road has not been maintained for nearly 20 years following the land grab disputes with local flesh-eating militant albino landowners. There is a cattle-guard part way up, although it is quite passable. Another cattle guard is right at the gate at the end of the car-accessible section. Bikes can continue beyond the gate for another 1.2 miles.”

This section was absolutely demoralizing. By now I was loudly cursing the godforsaken insects with every pedal stroke and continued my belabored paperboy-progress up the road. TBO asked if I wanted to turn around at gate, but I figured I might as well suffer for another 1.2 miles and see if we’d encounter any aggressive albino cannibals (they couldn’t possibly be more evil than the bugs.)

“This section is continuation of the Loma Almaden Rd. beyond the gate at the top of car-accessible section. Loma Almaden Rd. is the access road towards the Loma Almaden Air Force radar station on the top of Mt. Umunhum. The base of the radar, which was dismantled in the early 1980s, can be seen from far out as a 3-story-high “sugar cube”, aka “Monolith”. There’s also a white ball — National Weather Service Doppler Radar — on the nearby ridge. Live camera there provides constant views of Bay Area. The base is closed for public access because of the unsafe level of asbestos in the remaining structures and intervening private property. Mt. Umunhum means “hummingbird” in the language of Ohlone Indians who populated the area before Spanish colonization. The mountain is the second highest in the Santa Cruz range and was of ritual importance to the native tribes. The public road continues for 1.2 miles beyond the gate — riders are encouraged to climb over the gate and make the extra effort, as the views from the end of the public road are spectacular. See for yourself here. The end of the public section is quite clearly marked, with signs on the side of the road and large warnings painted across. It is unfortunate the remaining road is off limits, as the undulating, steep grades and awesome views make it quite tempting to continue.”

The never-ending assault from the bugs was making me feel absolutely miserable. TBO rode ahead of me and later remarked he could hear my anguished yelling from nearly a half a mile away. But I finally caught up to him and reached the sign where the public access ends — and somehow managed to stop only once on my way up there — then it was time to bomb back down to civilization. With the uneven pavement and super steep grades, the descent wasn’t that satisfying. But at least we were free of those hellish bugs. We made our way back to downtown San Jose and celebrated on CalTrain with tasty burritos from La Victoria Taqueria (“Home of the Orange Sauce”, which is like a spicy, creamy Mexican ranch dressing).