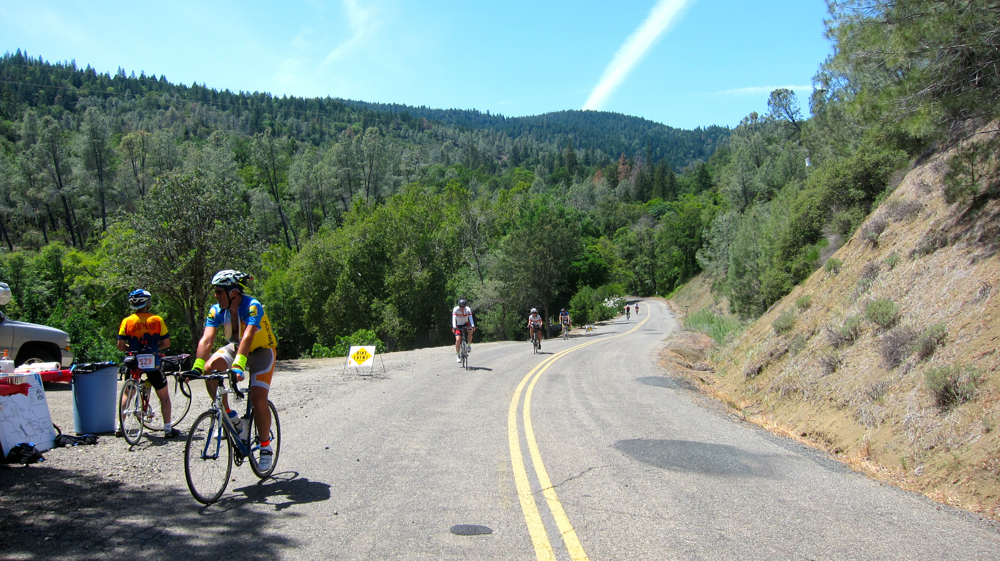 The 45th Annual Davis Double Century is the first double on the California Triple Crown series that I’ve now completed and the second big club-supported ride I’ve ridden in thus far. (The Grizzly Peak Century from several years ago was my maiden voyage in the realm of rides over 100 miles.) Endurance riding is still a new discipline for me as I began randonneuring last year, and I’m only now tackling events on the CTC calendar. I think most folks begin riding doubles before moving up to the longer distances, so I’m taking a backwards approach by finishing them the other way around!

With the 360k Flèche and Davis 400k under our belts, Denise and I were ready for another fun weekend of long miles on our bikes with the Davis Double. We met up with Francisco, Ken, Lane, Robert, Sharona and Steve at Caffe Italia for a carbtastic dinner on Friday evening, then headed off to the Motel 6 for a few hours’ rest before getting up at at the crack of dawn. I somehow awoke before my alarm went off at 3AM, and I unsuccessfully tried to will myself back to sleep for another 50 minutes. But my pre-ride excitement / anxiety ushered me out of bed, and Denise and I were ready to go by 4:30AM. Francisco graciously gave us a ride to the start in his truck as he was just two doors’ down from us at the motel, and we rolled out with the “Team Spotted Ass” entourage from the U.S. Bicycling Hall of Fame in downtown Davis at 5AM.


The first 23.8 miles to the Farnham Ranch Rest Stop was a blur of wind and fast pacelines. (Thank goodness for the well-marked course and the volunteers flagging all of the turns for us.) I was happy to shamelessly suck the wheels of any group I could hop onto as we took endless turns through the flat farmlands, and Denise and I separated from the rest of our crew in the ensuing battle for survival in the winds. We spent just a few minutes refueling at the ranch before heading back onto the road towards Monticello Dam. We latched onto more wheels and drafted along CA-128 to the base of the Cardiac climb, and saw SF Randonneurs‘ RBAs, Rob and Todd (current and former), as we took a short break near the dam to peel off some layers.


We made our way through wine country as we traversed Capell Valley to the next rest stop at a local fire station. The lines were long for the port-o-potties (no surprise since everyone’s morning coffee had probably kicked in by now), so we grabbed some quick snacks before moving on to the next fire station in Pope Valley. The crowds had thinned out a little bit and we indulged in the tasty granola bar squares, fresh fruit and other treats that the volunteers had set out for us. We also saw our friend Robert here, who was volunteering in support of his wife Sharona. (We’d continue to see him throughout the day and he kept us up-to-date on the progress of “Team Spotted Ass”.) It was hard to pull away from the delicious buffet, but we continued onwards towards Butts Canyon Road.


This nearly 19-mile stretch has a few short climbs and a LOT of headwinds (’twas the ongoing theme of day, as we later found out.) I found shelter in the shadow of a tall couple that hammered along towards Middletown and they pulled me to the end of this beautiful but windforsaken road. At one point I noticed I had accidentally left behind Denise at about 3/4 of the way in, but I selfishly clung to their wheels until we reached the turn off towards town where we reunited. We replenished our energy stores at the high school rest stop by eating some nourishing pickles and boiled potatoes, then washed it all down with some cold caffeinated drinks. With ice cubes in our water bottles, Denise and I were ready to undertake our first big climb of the day.


The wide, flat, 4-mile unpaved section of Big Canyon Road was my favorite part of the ride. (And from this point on, the rest of the route was entirely new to me — so I was looking forward to exploring the remaining 100 miles for the first time.) My 42mm Grand Bois Hetres tires, which had been attracting comments all day — “Those are some fat tires!” “I bet you have some rolling resistance with those!” — made for a buttery smooth descent on the rough gravel. (The other thing that garnered a lot of giggles and provided entertainment was my Boccalone kit which has the motto ‘Powered by Pork’ emblazoned across my butt.) We also had a chance to roll with Francisco and his friend for a bit before they took off ahead of us. After getting more ice at the water stop en route (where we saw Deb F. taking photos), Denise and I finished the rest of the scenic climb, then bombed down Seigler Canyon Road towards our lunch stop in Lower Lake.

We kicked off our shoes and lounged in the grass for about 40 minutes before tackling the last big climb on the route. I must have gotten a bit too comfortable and left behind my brain at the rest stop, as about a 1/4 of the mile after we left, I realized I had left both of my water bottles behind. Argh! I turned around to fetch them and saw Lane just as I was pulling back out of the parking lot.

Then it was onwards to the “Resurrection” climb on Highway 20, which has a steady grade ranging from 4-8% and is broken up by one descent in the middle. The afternoon sun and wind was beginning to wear me down, so I had to stop once to take some SaltStick caps, take off my hat and chip away at the sweat crystals caked on my face. By the time we reached the sanctuary at the summit, a full-blown heat migraine was throbbing in my temples. The giant water truck surrounded by water coolers filled with drinks was a welcome sight for my heat-addled self. I noticed several others were feeling overheated as well and had sought refuge in the shade of a pop-up tents. One of the saintly volunteers doused my head twice with a refreshing shower of cold water from a watering can, and I saw another helpful woman spray the back of an overheated rider’s neck with a cool mist — how’s that for service! After a few more salt pills, ibuprofen and ice water, I was feeling more human once again.


After a soul-reviving descent from the aptly named “Resurrection” rest stop, it was time for a swoopy ride along CA-16. Sometimes the wind was in our favor, other times we were hit with a crosswind. We were relieved to stop in Guinda for 20 minutes for some instant ramen, ice cold water and more caffeine for an impromptu picnic on the fire house’s back lawn.


The final 42 miles were mentally tough and physically taxing. Poor Denise got stung by a bee just prior to Guinda and was battling hot foot; assholes in big trucks towing boats were acting like jerks along the road, particularly near the casino where there’s no shoulder; we were plagued by more headwinds and crosswinds at every turn, especially in the last leg that wove through the interminably long and endless maze of flat rural roads. We stopped only for a Coke at the Farnham Ranch before slogging through the winds again. Denise and I managed to stave off some of the boredom and frustration of this section to see how many “carrots”, or other riders that were ahead of us, that we could pick off along the way. Once we were done with that, however, we were left alone to our own meandering thoughts as we put our heads down, pedaled away and longed for civilization.

And then…there it was, the city limit sign of Davis! We immediately perked up and picked up steam until we rolled through the gauntlet of cheering crowds of volunteers at the finish. You feel as if you’ve just completed the Tour de France with all of the hooting and hollering and camera flashes going off as you cross the threshold underneath the giant “Davis Double Century” banner. It’s pretty awesome! I believe we finished around 8:30pm; we were greeted with hugs from the Deb F. and Deb B. and then made haste to the lovely dinner buffet underneath the big tent.


A big thanks goes out to the Davis Club Bike for throwing such a spectacular event. (Visit the Velo Vecchio website if you’d like to read a fascinating historical account of this ride.) I’ve throughly enjoyed riding the brevet series, and the support and enthusiasm at each step of the way of the Double was superb! And a huge high five goes out to Denise, who’s an awesome riding partner — you couldn’t ask for a better friend to ride with! (I’m looking forward to our next adventure, the Davis 600k.) And it was great to meet and see so many wonderful friends throughout the day, too. See you on the road, folks!