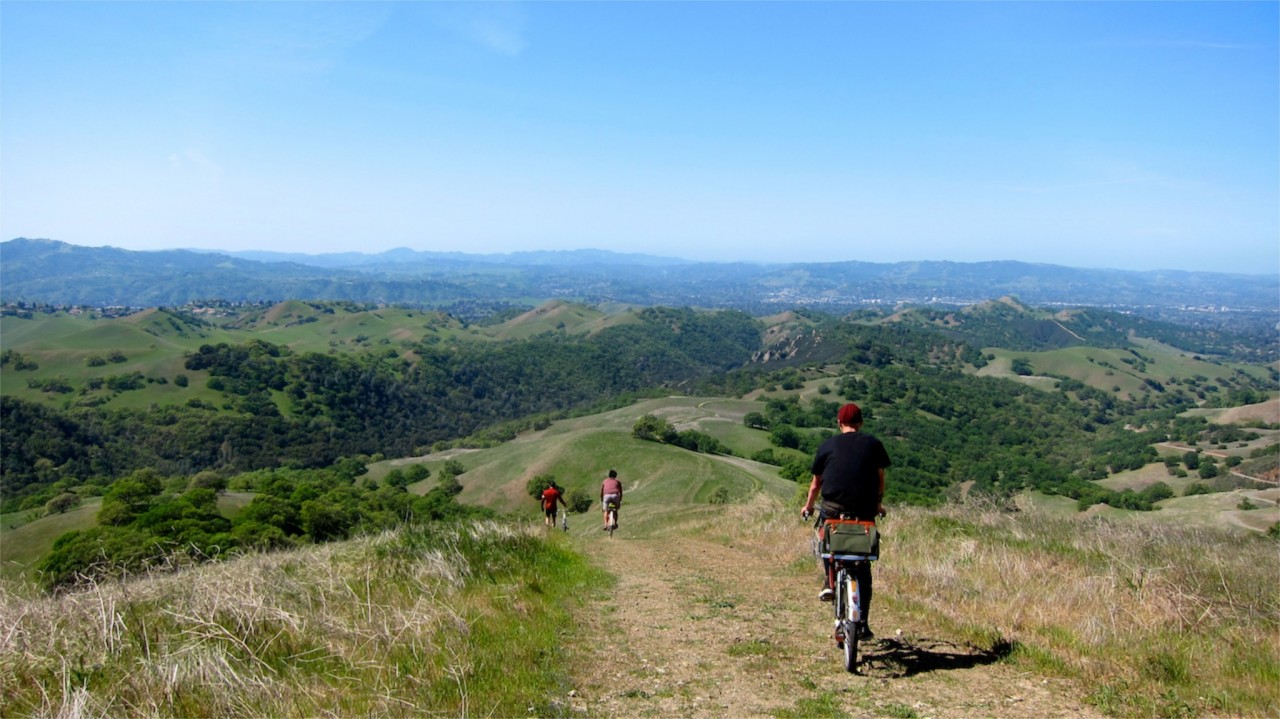 The San Francisco Randonneurs’ 360k Fleche ride is coming up this Saturday. In order to get ready, I had planned on getting in lots of miles on the bike this past week — until I was hit with the Plague 2.0 and reluctantly had to rest for several days.

But by Friday night I was feeling somewhat human again, so The Bearded One and I decided to embark on a 65-mile SF to Fremont ride after work — taking the longer way around the southern portion of the bay instead of the Dumbarton Bridge shortcut.

We set out just after 7PM into the lovely spring evening weather and enjoyed our casual cruise down the Peninsula. As we meandered down south, we got turned around in several sections and re-routed ourselves a few times, but eventually made our way towards Fremont. At 11:30PM, about 10 miles away from our final stop, we made a pit-stop for snacks in lieu of a late dinner. It occurred to me I should probably check what time we needed to get to the BART station for the train back to Oakland. A quick glance at my smartphone assured me we had until 12:45AM to get back. But as we pedaled along, I had an uneasy realization that I had looked at the schedule incorrectly. And as it turned out, we had only 10 minutes to catch the last train at midnight — which meant we weren’t catching it at all.

“Well, what should we do now?”

“I guess we have to ride all the way back.” This meant we had another 36 miles ahead of us and we’d be riding all night.

“At least this will be great preparation for the sleep deprivation that awaits you this weekend!”

Both of our phones were running out of juice, so we only had a few minutes to plot our route home. TBO memorized a few streets and figured we’d be able to find our way back since we’d ridden this way several times.

At about mile 71, we started encountering some familiar streets.

“Oh, maybe it just doubles back this way.”

Apparently we had made a wrong turn and were in Fremont once again. Whenever we started to feel tired, TBO would joke, “Oh, there’s Mowry,” we’d laugh, and that would help keep us awake as we pedaled onwards.

Hunger pains set in at 2AM in Hayward. Only fast food restaurants were open at this time, so it was either Yack-In-The-Box, Taco Hell or Rotten Ronnie’s, aka McDonald’s. We opted for the latter and rolled up to the drive-thru, which was the only service available. As we started to place our order, the clerk interrupted us and said they wouldn’t serve us because we were on bicycles. “It’s McDonald’s policy.” They ignored our protests and we left in disgust — although in all honesty, we really didn’t want to eat there anyway.

Just down the road, a 7-11 was open. We were able to buy some plastic-tasting food and encountered some surreal characters that you’d only meet at that desolate hour.

“But it comes with the sandwich,”

“Fine, fine. Can I take a Coke for my husband?”

“But he doesn’t drink Pepsi…”

This back-and-forth went on for several minutes, and I finally took a Dr. Pepper that I tried to give away to a truck driver (he didn’t want it either.)

Two teenagers standing outside told Shawn he must be Irish since “he was lucky enough to be with an Asian woman.” TBO and I looked at each other and telepathed, “Ohhhhh-kay, time to get back on the road.”

We passed through San Leandro, Alameda and finally, Oakland. It was actually quite pleasant riding along in the quiet streets with no traffic around, except for the fact that it was pretty chilly. Mental note: bring lots of layers for the 360k. And a flask of whiskey.

We got home just after 4:00AM with 101 miles as our final tally. TBO said, “We’d always wanted to do that ride — just not through the night! Let’s not do that again anytime soon — or ever again.”

Today we met up with my Fleche “Crampandgoslow” teammate Manny and his friend Will. They led us on an unbelievably gorgeous 28-mile mixed-terrain ride from Walnut Creek to Mt. Diablo. If you think biking up the road to the summit is picturesque, wait until you take an off-road route. It will blow your mind with its beauty! Unfortunately, TBO double pinch-flatted his tires on one of the fire roads — some sharp rocks shanked his sidewalls — but we were able to patch them up and carefully hiked-and-biked our way back to the main North Gate road. Our slick 28’s weren’t really the best choice for this ride, so we’re looking forward to coming back on our mountain bikes!