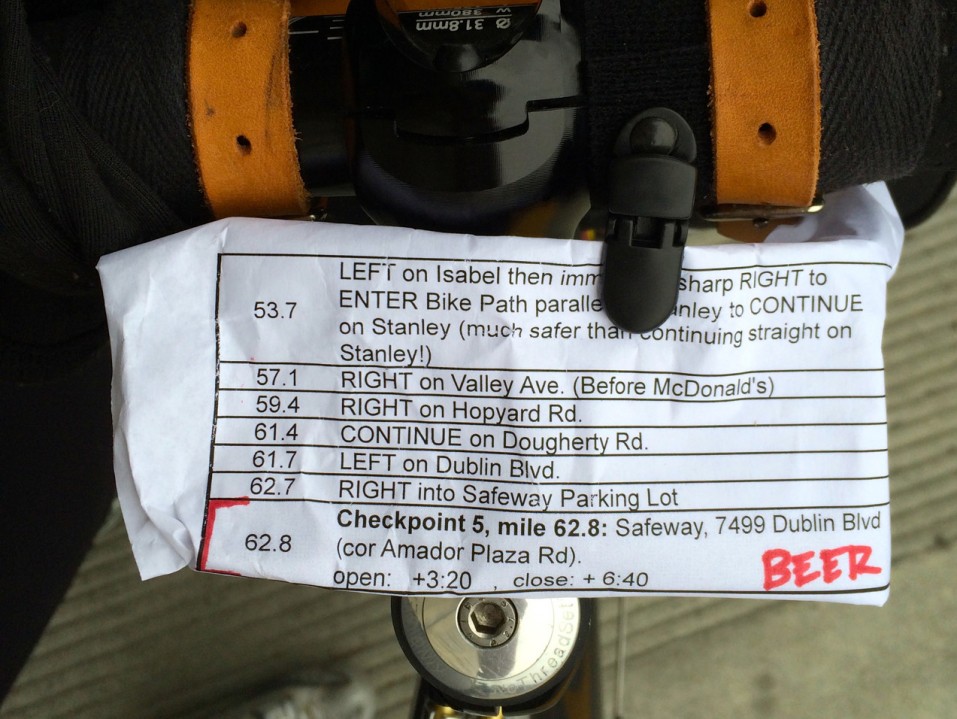 I’m ramping up the miles for the California Central Coast Randonnée 1200k I’ll be riding in August, so I’ve been trying to squeeze in as many 200k brevets and permanents as I can this month!

First up was a beautiful ride down the coast at the beginning of February. We were headed from San Francisco to Mountain View, with stops in Soquel and Pescadero (where we bumped into our friends Patrick and Max, who were on an epic mixed terrain ride). We’d never ridden on Stage Road, a long road that winds through the hills and offers spectacular glimpses of the Pacific Ocean on occasion. Another new climb was Soquel-San Jose Road, a gentle 11-mile ascent that took us over the Santa Cruz mountains to the South Bay.

TBO is getting weary of riding all of these long distances with me, so I chose a shorter route through the Tri-Valley for us to explore together. Starting in Dublin, “Pitter Patter Pop” is a 63-mile route that traverses windfarm country and goes through San Ramon, Livermore and Pleasanton. Neither of us had ventured along Altamont or Patterson Pass Roads before, so we were looking forward to getting acquainted with new terrain. The green, rolling hills dotted with the towering wind turbines stretch on infinitely into the distance, and if you’re lucky, you’ll catch a tailwind to zip you along the smooth roads past these looming giants. (I can see why this scenic route is a favorite with locals; my iPhone camera really didn’t do justice to the breathtaking landscapes of this area.) There’s a bit of a kicker at the end of the climb on Patterson Pass, and I believe it reaches at least 20% in one section as TBO had to paperboy his way up on his singlespeed. Then we sped back down to the flatlands of wine country for lunch…and of course, later on, for some beer.

As I had the day off for Presidents’ Day, I decided to spend my holiday riding a 201k permanent that covers a lot of territory: Dublin, Sunol, Milpitas, Fremont, Castro Valley, Moraga, Martinez, Walnut Creek, Danville, and San Ramon. Averaging over 7000 feet of elevation gain, I climbed up over the Calaveras Dam, then Palomares, followed by Redwood, continuing up Alhambra Valley (aka the “Pig Farm”) and later on, Reliez Valley.

It was a gorgeous day with temps mostly in the mid-60’s, so I was basking in the sunshine for most of the day. TBO had to work, so I tackled this route solo. I’ll readily admit that I don’t really like riding alone. Unlike my brother, who spends hours (and sometimes weeks) at a time meditating at silent retreats, I’m unsettled by long periods of solitude. Long distance swimmer Diana Nyad has commented in interviews that she resorts to counting in various languages or singing for hours on end to pass the time in the ocean. I don’t have that mental stamina. While I don’t need to constantly chat with a riding companion, just knowing that he or she is there to have a conversation with at some point — to help break up the inevitable monotony or fatigue that occurs on endurance rides — is comforting enough. I’m just not one of those people that can entertain myself — or just lose myself in the moment of riding during a 10-hour stretch or longer — so I resort to external stimuli to stay focused. I usually listen to a podcast (I prefer interviews and stories over music, so it’s usually something from NPR) to accompany me on rides where I’m rolling by myself. Perhaps someday I’ll be able to sing a song 2,000 times in my head like Ms. Dyad — but I doubt it.

I have one more 200k scheduled for this month…in Maui! I’ll be celebrating my 40th birthday and as luck would have it, there’s a permanent that I can ride while I’m there.