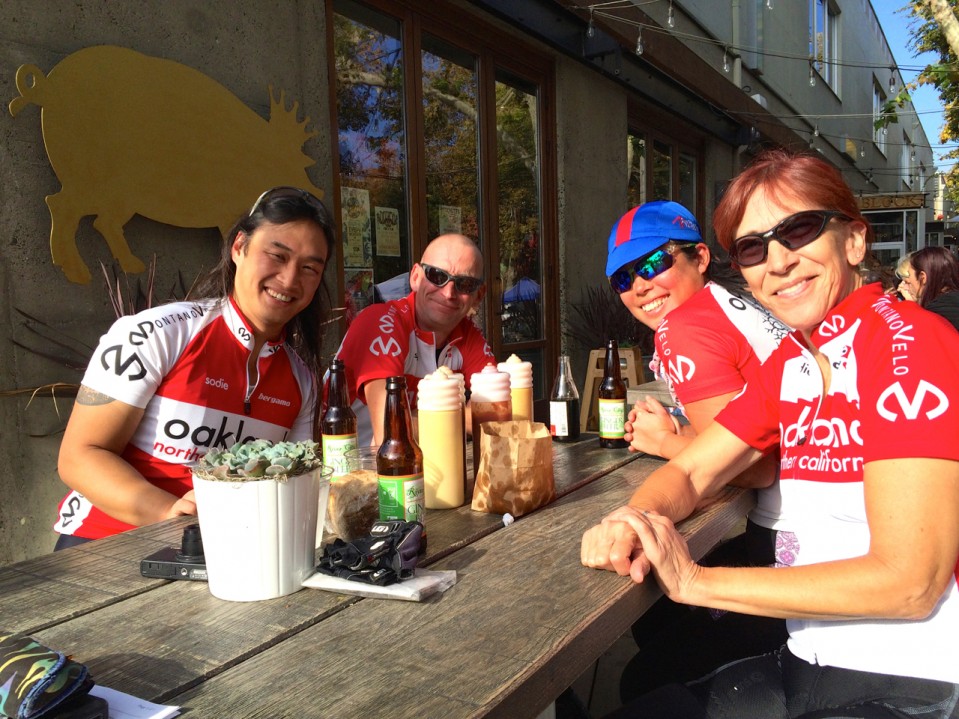 This was my first year riding the annual “Davis Dart” organized by the Davis Bike Club! I corralled a team consisting of members from our weekly East Bay Wednesday night social-rando ride, “Ride to Eat”: Denise, Frankie (who unfortunately had to drop out at the last minute), Jason and Martin.We had a blast on our flat, fun course that began at 6AM in Martinez, wound through the Delta, traversed the American River Trail, then finished at Sudwerk in Davis. Thanks to Eric Senter and the DBC for putting together a terrific event, and high-five to my teammates for an awesome day!

Number of teammates in matching Oakland jerseys from Montano Velo: 4 out of 4 (thanks to Frankie for the idea!)
How many teams we saw at the start: 1 (Will Ride For Beer)
And how many teams we saw the rest of the day: 0
The total number of controls: 7
Amount of big-ass pumpkin loaves Denise had to carry for Jason: 1
Mind-blowing number of sausages eaten by Jason and Martin at our lunch control (LowBrau in Sac): 6
Number of pretzel buns vs. regular buns: 2-2
Bags of duck fat fries we nibbled on: 1/2 from our table neighbors, 1/2 of our own order
Number of ginger beers consumed: 3
How many times my camera decided to have a meltdown: 1
How many times I had to recharge my phone as a result: 2
Number of bridges we crossed: 9
Hours spent in the fog: 3
Miles spent on bike trails: 27
How many fucks given when a truck told us to ride single file when we were in a bike lane in Sac: 0
Number of times Martin’s Garmin got pissed at us when we missed a turn and went off-route: hella
Amount of happiness riding single track along the Sacramento River: infinite
City limit signs won by Jason vs. me: 8-5
How often we marveled at the scenery: non-stop
Number of happy randonneurs at the finish: too many to count
Total number of martinis consumed at Sudwerk: 2 (thanks to Eric W. for buying me 1!)
Number of beers consumed by other randos at Sudwerk: I can’t count that high
Shots of whiskey downed on the train back to Martinez: 1 (thanks to Steve H. for that one!)