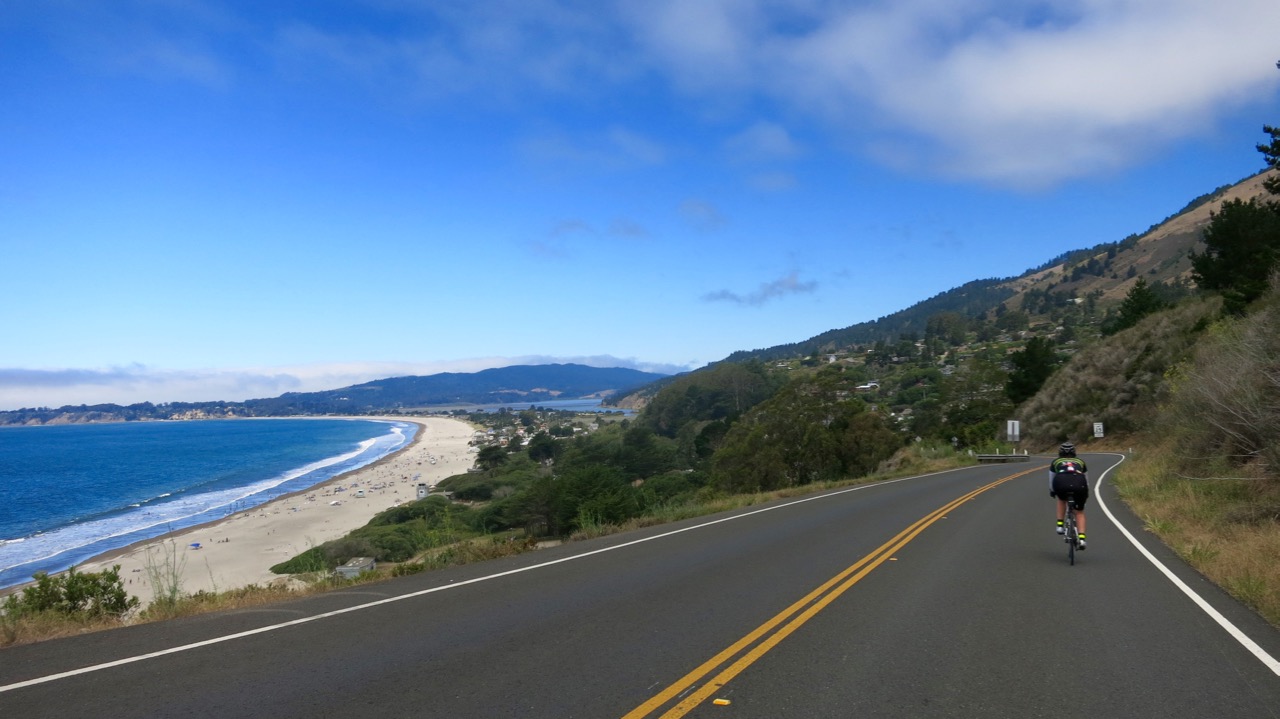 THE GOOD: I kept my R-12 streak* going with an SF Randonneurs workers’ ride on Saturday; I’m now at R-31 for finishing at least one 200k each month! Plus I got to pedal from Mill Valley to Tomales on one of my favorite sections of Hwy. 1 under brilliant blue skies, and Ann triumphantly rode her first 200k after a two month-hiatus due to recovering from surgery.

THE BAD: My drive train had been making funky sounds during a recent Thursday night ride. I asked Pudu to take a peek and he decided that it was just too dirty — I guess my recent scrub job was pretty inadequate — and just needed a thorough cleaning. But upon disassembling the cassette on Friday night, one tooth from a cog cracked off right into his hands. Given that I run Campy on my CX bike and wanted a more generous range of gears, I was using an IRD-compatible cassette (11-32). But I must have angered Tulio Campagnolo, who was most likely watching with a frown from his Italian villa in the skies that requires a special proprietary key to enter as a) this cassette had lasted just shy of a year b) the only thing readily available as a temporary fix was a 12-25. Ouch. The ~8700 ft. of climbing was gonna hurt (although in the end, it wasn’t too miserable, although Wilson Hill was an awful grind.)

THE UGLY: On Saturday morning, one of our riding partners, David, was delayed by BART so he rode the route solo; my drive train was still emitting horrific noises and so Ann and I waited for Bicycle Odyssey to open to see if they could assess the problem. Just as we were sitting down with our drinks at the nearby Cibo Cafe, David swiftly rode past us with a determined look on his face, oblivious to our calls. (He’d been trying to chase us down, so he didn’t hear us or check his phone until much later.) Tony, the owner of the shop (and all-around stellar guy) quickly sorted out the issue: Pudu had accidentally used a 10-sp quick link on my chain instead of an 11-sp. So while Ann and I had contemplated DNF’ing or doing a shorter route, we decided to forge ahead. My drive chain was still a bit finicky but rideable, but now we were on a time crunch to make it to our sole receipt control in Freestone before it closed. (Blessedly, the others were info controls so we saved a lot of time that way.) We stopped briefly in Olema to refuel with a hasty snack; otherwise, we kept at our task of riding the hills through mostly headwinds and fog.

After we reached Wild Flour Bakery — ah, the restorative powers of their goat cheese flat with garlic and green onions — we had more hills ahead of us, including the bumpy B’s (Burnett Valley, Burnside and Broomfield). These roads were pockmarked with so many potholes and patched-up pieces of pavement that my iPhone flew out of my handlebar bag and landed face down (of course) onto the road, breaking the glass. (I haven’t even finished paying off the damn thing, sigh.) Pudu and Denise had been calling and texting us to inquire as to our whereabouts — they assumed we’d gone home — but I wasn’t able to respond due to lack of reception and now I was the unhappy owner of a busted smartphone. Ann had hers in airplane mode and was more focused on finishing the ride, so we stoically soldiered forth into the night with only a quick stop in Fairfax (Ann grabbed some final calories to power her to the end.)

We made it with just 15 minutes to spare, which I think is the record for both of us in terms of cutting it close to the closing time (which was 10:30pm.) BUT FINISH WE DID — tired, hungry yet elated we overcame all of the bullshit that the day had thrown our way. After reassuring Pudu and Denise we were alive and intact, we headed off to Safeway for a much-needed late dinner. My stomach had been bit unsettled for most of the ride, so I had stuck to eating just bread, tomatoes, avocados and energy bars all day; now I was ready for some real food and some (practically) day-old sushi from Safeway tasted like…well, it did the job of filling some of the void in my growling belly.

AND IN THE END, ALL GOOD: Congrats again to Ann for rallying to the end like a champ. While she found the hills more challenging as she’d been spending less time on the bike as of late, she ascended each one without complaint or with a cheerful (perhaps rueful) laugh: “Whew, my legs are tired, haha!” And the ride was a great training ride for me with my upcoming Paris-Brest-Paris adventure, especially with that godforsaken gearing I had to run (hopefully my replacement cassette will arrive this week…Sorry, Tulio.)


*I just found out that this ride will count towards August, not July, given the byzantine rules involved with randonneuring that I wasn’t aware of. Oh well — guess I’m breaking it early (I was planning on breaking it after PBP.)