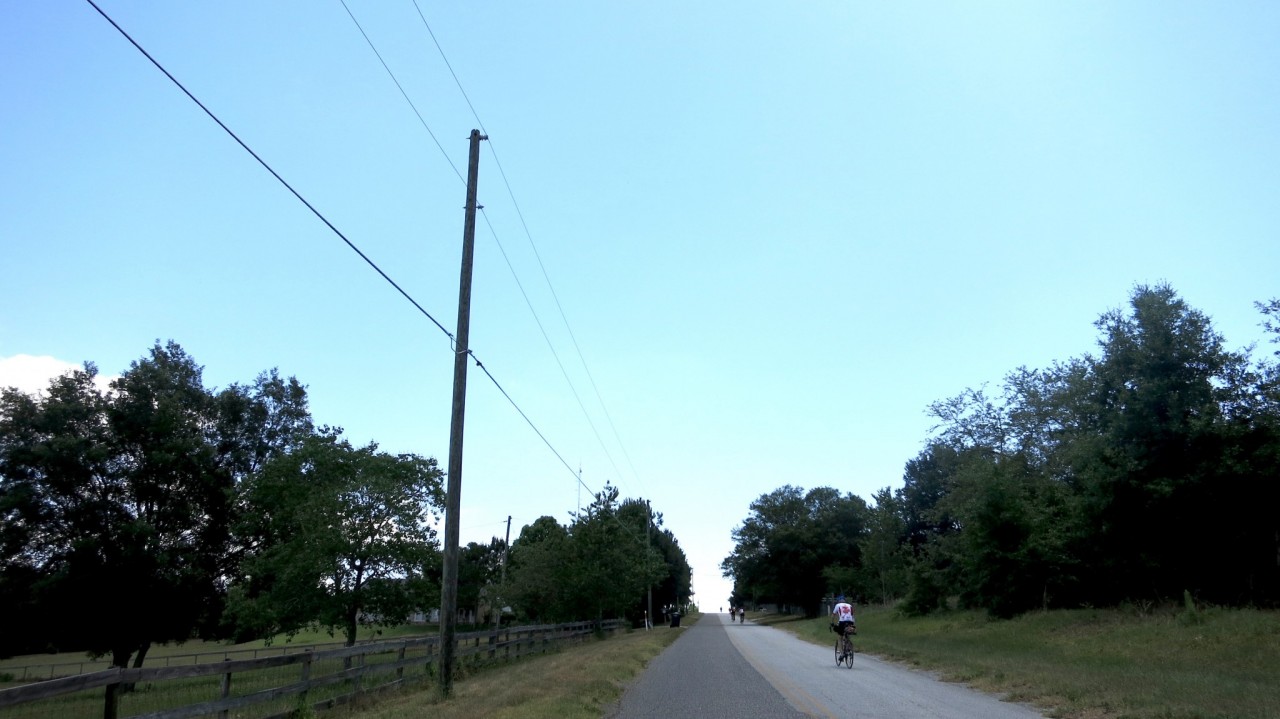 Previously, on The Californians: When we last saw our frotchy heroine, she’d just been given a key to her own hotel room after Day 2’s 184-mile ride.

Whooooooooweee! So guess who got 5.5 hours of blissful, dead-to-the-world sleep? This lucky gal! I felt totally rejuvenated and was rarin’ to take on the “hilly” day of the ride that promised us at least 3000ft. of climbing.

I gleefully bounced downstairs to reunite with the Bay Area gang. The North Carolina/Texan folks had invited us to join them at an IHOP that was en route at 4AM. It was just the four of us at that early hour: us Californians and Toshi. Dave and Werner decided to sleep in longer, and Pudu forgot to notify Calista of our start time — probably because he was worn out from his sprint-to-the-finish session from the night before. When he started whining to us about how his legs were toast from pushing an average speed of 22 mph on the hotel home stretch with the tandem/recumbent team, my response came in the form of Nelson from the Simpsons: pointing at his quads and saying “HA-ha! That’s what you get for dropping us, dude.”

We meandered back out onto S. Atlantic and after a few head-scratching moments, squinting at our smartphones since we couldn’t find our restaurant, we were ready to settle for Steak n’ Shake. But only the drive-thru was open, so Krispy Kreme or McDonald’s was our next option — until Roland happened to get a lock on the IHOP location. Over breakfast, Pudu and I told Toshi about L’Eroica Japan (we’d gone to the inaugural event in California and had a blast) and another endurance event that traversed the country’s islands. He in turn asked what we were doing next year. A stunned, collective pause briefly brought the conversation to a halt as we thought, “Next year? We’re still trying to get through this ride!” As a veteran PBP ancien, Toshi already had his eye on 1001Miglia and Alaska’s Big Wild Ride 1200k for his next adventures.

Morning Glory
Filled with glorious calories, energized by my rest and calmed by the cool hours of the morning — I actually took a long pull on the next section past the Daytona Speedway to US 92. (Due to my petite size and middling abilities relative to my current peers, I usually spend more time in the back wheelsucking than pulling.) But I felt positively heroic that morning and unusually for me, stayed up in the front until we encountered a pair of Canadians, Bob and Jean. We shared a mutual appreciation for this fresh round of new company that would help pass the time. We chatted away, recounting our respective experiences up until that point; they hadn’t trained much that year due to the weather up north and had been suffering in the heat, so they’d set out early to ensure they’d make the time cuts for the controls. Another topic centered around the merits of stopping fully at intersections vs. “Idaho stops” as we passed through the small town of DeLand. (We Americans tended to come to a complete stop more often than the Canadians, who joked that we were fast enough to have the luxury to do so.) And then we snagged Wayne and Melanie not too far from our first control. Roland, Pudu and myself had already met them way back in Ft. Myers Beach (ah, wasn’t that ages ago?) when we were running our pre-ride errands. They were a sweet couple and I was envious of their tandem time; my husband refuses to get one since he suspects I’ll just be chilling back there taking photos while he does all the work (he knows me all too well.)

Hitching a Ride on the Toshi Train
About five miles from the control, we hit one of my favorite parts of the entire ride. With tailwinds finally treating us to a nice push forward, we all hopped onto Toshi’s wheel — all aboard the Nippon Express! — and effortlessly flew to the Paisley Market.

Well, we thought it was the Paisley Market. Apparently there were two (the other one was open 24-hours) and silly Pudu had led us to the wrong one. (While he’s a really strong rider who has two RUSA Cups, including one that was obtained by riding a fixed gear, navigation is certainly not his strong suit.) But a volunteer showed up — at the prompting of Wayne and Melanie, who’d set out ahead of us — and signed our cards as proof of arrival.

The “Hills”
Now we entered a decidedly un-Florida-like section of scenery. Palm trees gave way to uniform forests of pencil-thin pine trees and grassy meadows filled with grazing cows. Gentle rollers started to appear like little burps in the road that we Bay Area hill snobs handled with ease. But Thrill Hill, marked with a sign that we refer to as, “Trucks on Cheese”, took some work as it pitched upwards abruptly (Wayne and Melanie noted it was the only hill they’d ever fallen over on their tandem.)

Now who’s that sidling up alongside us in the black SUV? Why, if it isn’t our favorite twinsie Canadians, Dave and Dick! With their matching white beards, similar builds and glasses, you could mistake them for brothers — except Dick was the one yelling out the window, “How ya doing?” while Dave manned the wheel. They pulled over to ply us with cold drinks and thick slices of homemade banana bread, which readied us for the grand finale of climbs: Sugarloaf “Mountain”. (But first, we had to reorient ourselves as we took a wrong turn near the cutesy-sounding Honey-in-the-Hills; thanks again, Pudu.)

Sugarloaf “Mountain”
This 312-ft. ascent is the second highest point in the entire state of Florida. It doesn’t sound like much on paper, and normally it wouldn’t be, but on Day 3 of a 1200k and with the grade ranging between 6-16% — I felt like Florida was punishing me for my earlier California arrogance. Toshi, with his Alberto Contador-like physique and love of climbing, sprinted off like a nimble gazelle into the distance; I could hear Phil Liggett’s voice announcing in my head, “Just look at him dancing on his pedals while he leaves the peloton behind!” Meanwhile, I paperboyed slowly up that sucker, coming in DFL (dead fucking last) to the summit. A pop-up tent welcomed us at the top, as Marion (the only female cyclist who successfully pre-rode the course the previous week) showered us with more cold beverages, snacks and even saved us the trouble of getting the info control answer that was 100 ft. away since she had scribbled it down for us. (Read about the “man at the top of the hill“; the info control answer relates to his kindness towards cyclists and the amount of money he’s raised to date for charity: $15,982.)

Low-Carb Chit-Chat and Cranking Away
With its comfy chairs and coolers filled with ice, it took some willpower to peel ourselves away from this hillside haven. Someone had obviously turned the cumulus cloud machine on, but the sun still glared at us through the patchwork of cover in the searing afternoon sky. Roland paired up with fellow recumbent Alaskan Andy (who’d been battling a series of flats and mechanicals the past two days but seemed to finally be all squared away.) I rambled along at a slower pace, trying not to fry myself in the debilitating heat, and continued chatting with Canadian Bob. He told me how he and Jean live on a high-fat, low carb diet — limiting themselves to just 50 grams a day — which Dick suggested they try to alleviate their various energy and GI issues. The trio subsequently successfully completed a 1000k in Israel, and while their wives grumble a bit about their lean frames, they’re quite content with the fact that they never bonk and only have to eat a minimal amount of food at controls. Sure enough, they just nibbled on nuts and beef jerky while the rest of us gobbled down every bready, salty, sugary item we could get our hands on. While I love the idea of this refined approach and was impressed by their discipline, I simply can’t fathom life without pizza or beer. (But I am inspired to check out the book he suggested, The Art and Science of Low Carbohydrate Performance. Maybe I can find some helpful tips without totally eschewing my slice of ‘za.)

JSquared
RBA John graced us with his presence again at the Kangaroo Mart, this time accompanied by his lovely wife Juliet, who gave me and Calista (we reunited here) big woman-power hugs. We spread out like dishelved rando hobos inside the mart — and I savored my can of cold Chef Boyardee beef ravioli upon Roland’s recommendation.

Alligators Ahead
J & J tagged along for this leg of the ride and alerted us to the thrilling notion that possible alligator sightings were ahead! While excited by the prospect of seeing some native Florida wildlife in their natural environment, I limped along due to the grueling heat. I dropped back with Bob and Roland, ambling at a life-preserving pace until we spotted J & J parked on the side of the road, ready to take our photos. After our paparazzi moment, they zoomed on by; as I’m not one to pass up a fast tandem pull, I quickly jumped on to draft as long as possible. They speedily escorted us to another shady RUSA retreat located right before the start of the Van Fleet State Trail.

Gators O’Clock
Toshi and the Canadians were restless so they skipped on ahead. Calista and us Californians leisurely sauntered along the sun-dappled trail, calling out greetings to Texas Charlie who careened past us along the way. We stopped often to coo at the large turtles that dotted the road; they surprised us by how quickly they scurried away when we leaned in too closely to take pictures. J & J had predicted we’d probably spot alligators at the second wooden bridge, which is where they’d seen them earlier. They pulled up right as we reached our viewing destination and sure enough — there was a lazy trio napping in the swamp. (Another item crossed off of our bingo bucket list!) Calista took the opportunity, as we marveled at the magnificent beasts, to eat a gigantic sour pickle, and the expression on her face when she first bit into it was priceless (and it’s now documented for posterity.)

Presents!
She continued to win the prize for ingesting cosmetically challenged food by buying a crushed Oreo-covered ice cream, which we giggled over since it looked like a “charred turdsicle.” I believe it was here that she mentioned she’d noticed my collection of pins on my handlebar bag and gave me a cool DC Randonneurs pin. “We had them made for PBP.” “Oh wow, thank you!” Jealously watching this exchange, Pudu sounded his wambulance alarm and pointed out that he had pins on his bag, too, so she graciously gave one to him and Roland.

Magic Hour in Orangelandia
The final 27.5 miles was mostly filled with short, twisty turns through farming towns and orange groves, which helped break up the lethargy I was feeling during this segment. I fired up my iPod again, wanting a soundtrack as we weaved through the quiet agricultural backroads. We caught up to Toshi and the Canadians; he told me, “Shift change…” and then hooked up with Pudu to race together back to the finish (although Pudu later admitted he dropped off about 6 miles from the end.) Roland and I eased into sunset shutterbug mode, stopping often to try and capture the beautiful waning light with our cameras — and I even stopped to pluck an orange off a tree. We arrived at our Lake Wales control just after 8:30PM, ready to take a nosedive into the big pan of lasagna that was being served for dinner.