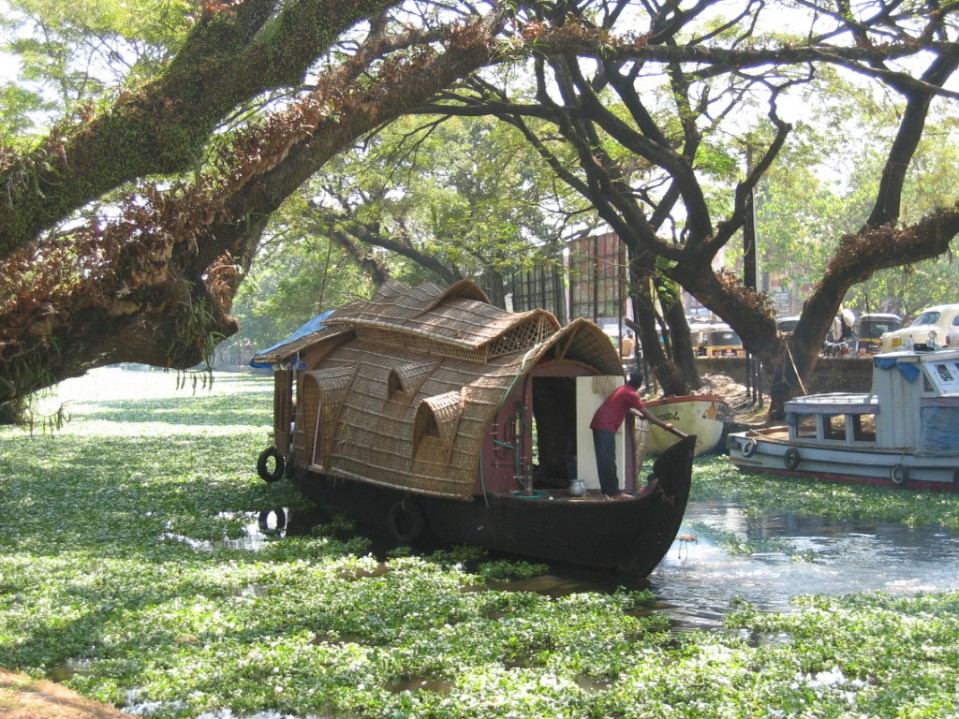 “All of the villagers stare at us as we pass by, some stoically, some with a smile.”

“The houseboat is a wide canoe-like structure with the domed roof made out of woven jute, bamboo and rattan and palm leaves. There are three crew members: a wizened old captain with a gentle smile; a friendly cook named Apu and the engine operator. The engine operator and captain communicate with one another by ringing a bell.”

“I watched the cook make several curries in his tiny kitchen. Using a gas range that had two burners and blackened woks, he made one curry with coconut, another with okra. Everything was sauteed with coconut oil and seasoned with mustard seeds and tumeric. Apu also toasted papadum and fired up kingfish steaks that had been rubbed in a chili paste. He had made sambar and rice ahead of time. His knives looked dull, but he was able to cut all of his vegetables by using a careful slicing motion and drew the blade towards him. The engine operator would rinse the cutting boards in the river. Other tools were cleaned in bowls of water on the deck. Apu and the engine operator chatted while he cooked, and they both laughed at my interest in his preparations. “Are you hungry? Are you hungry?” he asked several times.”

“Kerala’s backwaters are my favorite part of the trip thus far. Small villages are interwoven within an intricate series of canals. The landscape is lush with palm trees that remind me of tall, frizzled lollipops or feather dusters, and the air is warm and thick and moist but still not too humid this time of year. Fishermen go out early every morning to catch a native fish akin to porgy and use long canoes to traverse the waterways. On our boat cruise, several paddled up to us and hitched a ride by clinging to the side. We even had some bring us fresh coconuts that were hacked open right on the spot.”

“Women wash their laundry on the steps that lead to the river. They slap and whip their clothing on the stones, then scrub them clean in the water.”

“The mountains were covered for miles with tea and coffee plants. The small uniformly-cropped tea bushes snaked in maze-like patterns upwards along the rolling terrain, and from a distance the endless rows of bushes resembled green sea coral that blanketed the countryside.”

—Journal Entries From My Trip to India in 2004