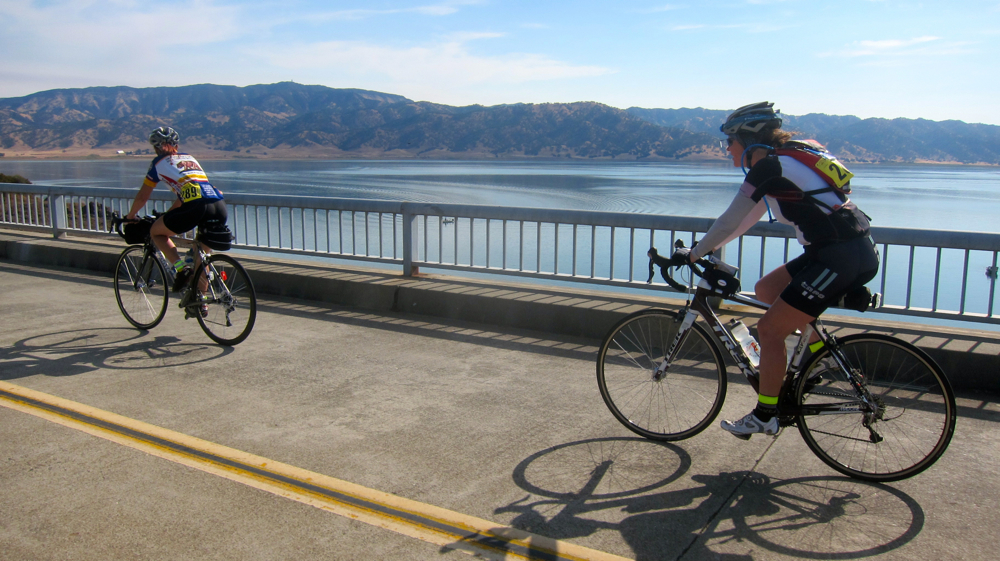 While I don’t think I’ll be able to get a CA Triple Crown this year unless I hustle to some region outside of the Bay Area in the next few months, I was able to squeeze in the Quackcyclists’ Knoxville Fall Classic Double Century staff ride yesterday. (I’ll be volunteering at the official ride next week.) They’re a lively bunch of riders who also organize the legendary Devil Mountain Double, and I have to commend them on the amazing level of support at yesterday’s event: the rest stops were stocked with tons of delicious food and staffed with cheery, supportive volunteers; the course was well-marked; SAG vehicles were roaming about checking up on us on a regular basis.

-Ann (this is her first double century!), Denise (her 5th Knoxville), Pudu and myself were all signed up for the staff ride and had carb-tastic dinner at a local Italian restaurant at the suggestion of Clyde, and two of his friends joined us as well.

– We were camped down at the Vacaville Best Western. Denise and I shared a room, and Pudu and Ann were just two doors down from us. They remained blissfully unaware of the loud, foot-stomping steps of the family upstairs (10:30pm) and the drunk teenagers gathered outside our room in the stairwell. Denise barked at them like a drill sergeant (1:30am) and they finally took the hint the second time around and went elsewhere for their late-night shenanigans.

– Alarm goes off at 2:50am, I drag myself out of bed at 3. I had terrible anxiety dreams that involved roofies and incontinence (don’t ask.) But we were rolled out to the start at Pena Adobe Park just before 4AM, then hit the road.

– It was a warm, balmy and foggy morning. Descending Hwy. 121 in the mist and drizzle was a bit challenging. I was hoping to chase Pudu but lost him at the summit; the last glimpse I caught of him was him leaving the first rest stop just as I was pulling in. (I also thought, in my early morning haze, that the rest stop was at a winery as I thought I saw riders in hi-viz gear gathered in the distance. Turned out to be farm workers in orange vests and blinking truck taillights. And then I rolled past the Napa River Ecological Reserve rest stop until one of the volunteers let out a loud whistle to rein me back in.)

– Reunited with Ann and Denise to tackle Howell Mtn. I went ahead and rode with Matthew Wietrick and two of his friends. This was my first time up this climb and we had a beautiful view of the fog covering the valley.

– Met up with the ladies at the second rest stop at Lake Berryessa for some much-needed calories (peanut butter and jelly! roasted potatoes!) before tackling the bumpy pavement of Knoxville Road (also my first time in this section). It was hot, but not sweltering at this point, until we reached the final climbs that led to water sanctuary at the summit. I accidentally made a beeline for the Luna/Clif Bar tent, which was filled with happy cyclists (I’d find out later on why) who were on the Epiphany staff ride. Pulled a u-turn and the volunteer spoiled us with ice in our water bottles, fresh fruit and even let us steal his chairs to kick back and relax for a moment. This was our first sighting of Metin and Roy, who were also on the ride!

– Then it was time for the Morgan Valley descent! This was the true highlight of the day. I didn’t want it to end and foolishly forgot to take any photos while bombing down. I passed many Clif cyclists struggling up the climb in the afternoon heat and was soooo glad I was not heading in the same direction. There was also a Quackcyclist message painted onto the road — I didn’t stop to read it carefully but it was something about this being the last hill on that section — and now I’m wondering what it said…

– Lunchtime at Lower Lake County Park, where Cheryl fed us delicious wraps (I stashed a second in my handlebar bag for later and enjoyed it after the Loch Lomond climb) and where we first spotted Clyde. He mentioned taking a short cut that the organizers planned on offering to riders as an alternate route on event day, but we decided to punish ourselves and stuck to the full route — off to Loch Lomond!

– The heat on Siegler Canyon Road was terrible; every time I hit a pocket of sun, I felt my skin sizzling like a skillet full of bacon. I sprinted through this section as fast as I could to get into the shade. Fortunately, only the first part of the Loch Lomond climb was exposed and it was much shorter than I’d imagined. (This was my maiden voyage up this road and it reminded me of the Centennial Drive climb: a slow burn that gets gradually more excruciating as you approach the summit, but isn’t too long.) When I saw a sign for “Ridge Road”, I thought I might be at the top but didn’t want to celebrate too early. But the road flattened out and next thing I knew, I arrived at the blessed little store at the junction of Hwy. 175 and Loch Lomond Road. There was a giant sign advertising Lagunitas beer, but alas, they only sold the giant 40 oz. sizes as singles; I didn’t want to take my chances descending Cobb Mountain with that much beer in me!

– I was also very, very glad to not be climbing up Cobb Mountain, like during the Davis 300k; this is another one of my favorite descents in the area where you feel like you’re bombing for days as you pass a series of “trucks on cheese” signs.

– Sadly, we arrived just after 5 to rest stop #4 at a local winery, so bathrooms had just closed. But we got more ice and snacks that tided us over until we hit rest stop #5 at Moore Creek Park, where Eric Senter spoiled us with Cup O’ Noodles, hot dogs, miso soup and other goodies. Ann decided to split off from us here to ride at her own pace to the finish, so Denise and I headed out together to tackle the final 43 miles.

– The stretch leading up to the dam flew by quickly, but that last 12.6 miles on Pleasants Valley Road felt interminably long — but at least it was mostly flat! Ready to get off our bikes after a long day, we arrived back at the parking lot at 10:42pm.

– While I did get my usual case of heat rash from baking in the sun all day, I didn’t have my usual “trashed out” feeling that I have after tough rides. Legs felt good, arms were a bit stiff from being pounded all day on the rutted roads (akin to how I feel after an afternoon of mountain biking) and had tons of energy until my body realized that I was done riding (then it launched into shutdown mode.) Denise and I had a celebratory meal at In-N-Out before driving back to Oakland.

Kudos to the gang for finishing and for braving the heat and hills for a fun day!