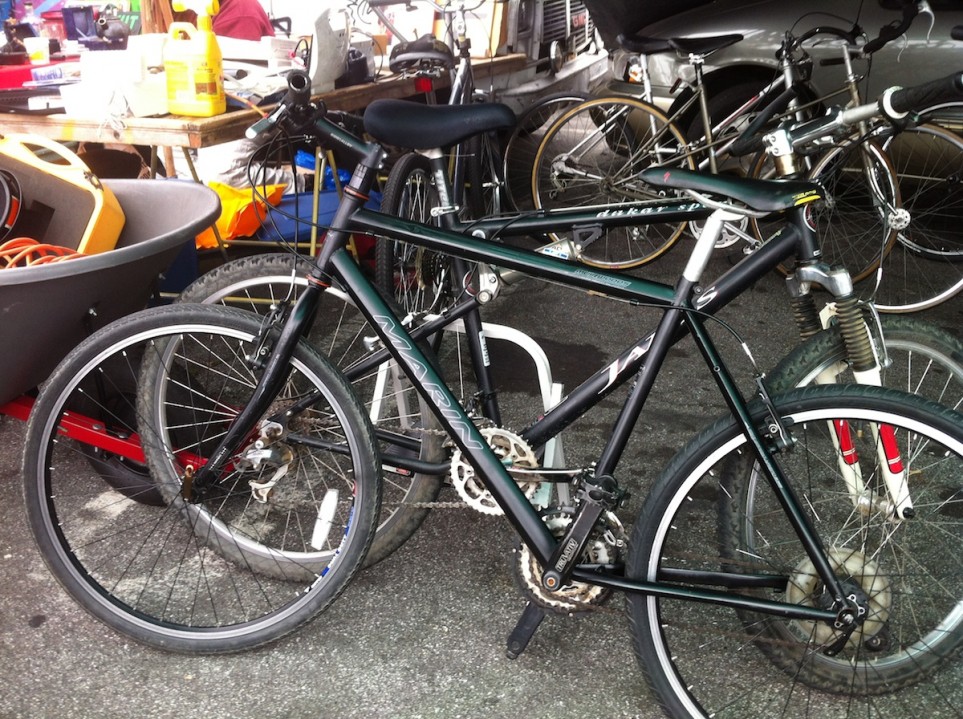 When my mountain bike was stolen last July, it was recovered at Laney College’s weekend flea market. This was when I first learned that if you’re looking for a stolen bicycle, chances are it might pop up for sale among their vendors. It also spurred me to try and tackle this problem in the Bay Area, and now over a year later, I’ve acquired more knowledge about bike theft — and some supportive allies — during this time.

Officer Matt Friedman of SFPD (who runs @SFPDBikeTheft) has been doing a tremendous amount of work in combatting the problem of bike theft in San Francisco. But he’s also been proactive with helping our community on this side of the bay as well. Earlier this week, he organized a meeting with representatives from Laney College, managers of the flea market, Alameda County law enforcement and the East Bay Bicycle Coalition to address this subject (unfortunately, I was out of town and couldn’t attend.) But my colleague and fellow EBBC board member, Glenda Barnhart of Bay Area Bikes, took excellent notes. Here’s an excerpt from her write-up:

Currently, Alemany Flea Market in SF has completed stopped the sale of bikes, however Laney appears to be reluctant to go this far. It appears that they are most concerned with having to police the 1-2 bikes that may be included in a load of household/garage goods. (My note: They don’t want to discourage the infrequent/one-time seller who’s having a “garage sale” and happens to have some old bicycles included in the mix.)

Laney’s manager has implemented some strategies already, such as not allowing into the market what appears to be $1000-and-above bikes, checking for the required sellers’ permits, and involving the officer on duty when the situation calls for this. These strategies may be difficult to enforce and have questionable effectiveness, since valuation can be arbitrary, sub-$1000 bikes are stolen every day and some bike shops are known to deal with stolen bikes and bike parts.

It was agreed that having policy-based enforcement would be more effective and easier to manage than targeting and enforcing what appears to be illegitimate sellers. Any new regulations or restrictions should be concrete and applied universally so that there is no opportunity for profiling or bias.

Ideas that were presented include:

–Completely stopping the sale of all bikes at the flea market
–Isolating all bike sales at the market into one location, rather than throughout the market
–Creating a list of vetted legitimate bike shops that will buy and sell used bikes
–Patrolling and enforcing the perimeter of the market to prevent the sales from moving just outside the market
–Active policing by PD inside the market, with guidance provided by the policy
–Undercover and bait bike operations by law enforcement
–Continuing to educate the bike community re: prevention

Glenda and I had a follow-up meeting with Oakland PD Officer Jennifer Sena, who has been regularly patrolling the flea market as of January of this year. She’s helped to crack down on illicit sales of DVDs and electronics during her bi-monthly visits, and she’d like to be directly involved with our efforts to prevent thieves from using the flea market as a steady distribution point.

One statistic of note that Ofc. Sena relayed to us was that only one bike theft has been reported stolen (and recovered) from the Laney College flea market in the past 11 months. We replied that most people, once they’ve recovered their bicycles, probably don’t follow up with the police to add this information to their report. So in the interest of getting some informal data to help with our efforts to brainstorm solutions, we’d love to get your responses to the following survey:

Please leave your answers and feedback in the comments section below, and share this post as we’d love to get as much information as possible. Thank you!