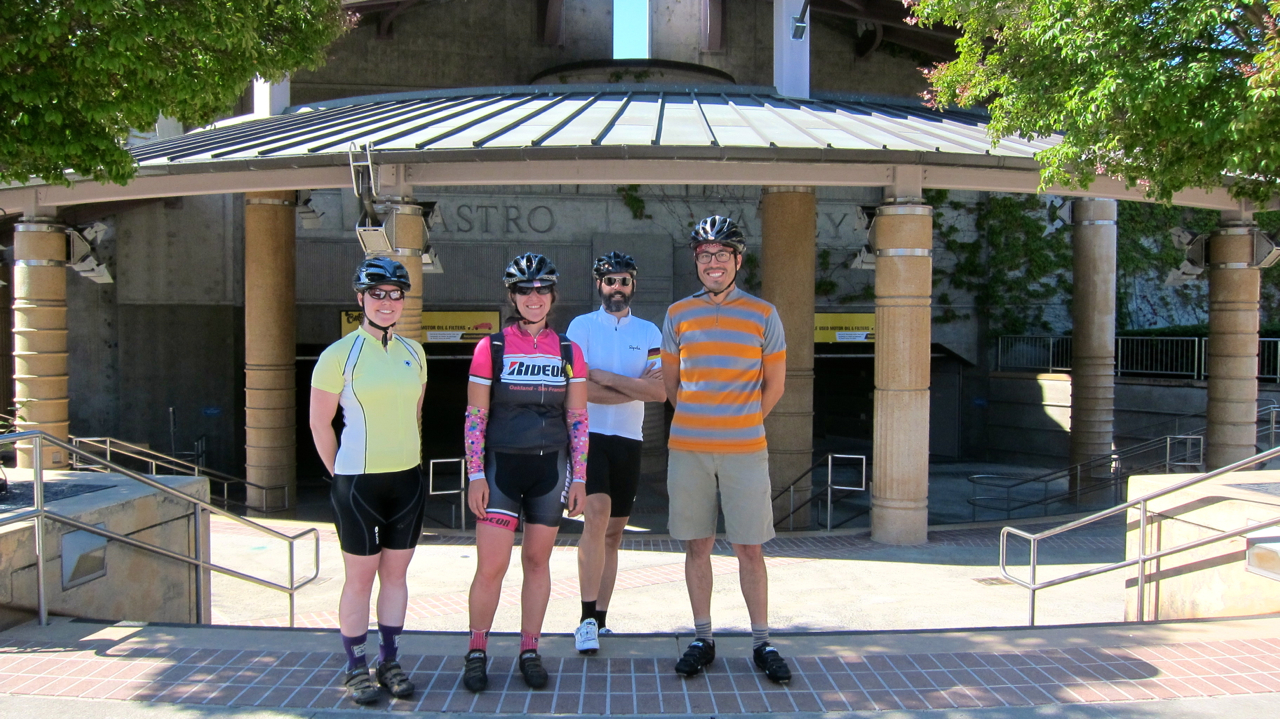 Today was my first Dart event with the San Francisco Randonneurs. It’s similar to a flèche, except the distance is shorter.Instead of going 360km, 3-5 person teams have the choice of riding either a 200k or 115k. I put a call out to my Ride-On friends (a local group I ride with) to see if anyone was interested in doing the shorter Populaire length, and Chava, Ellen and Jorge — along with TBO — said they were game. TBO suggested we call our team “Rand-On” as an homage to our group, and I designed a route I hoped would be a mellow introduction to randonneuring for our non-RUSA members.

We set out at 10AM from Castro Valley BART and had 78 miles ahead of us. It was already getting pretty warm, and by the time we reached our first control about 12 miles away — the temperature was probably in the upper ’80’s. Starting to feel like Sizzlean en route to Dublin/Pleasanton BART

After a quick pit stop at cafe just outside of the Dublin/Pleasanton BART station, we headed onwards to the Iron Horse Trail. This is a 24-mile multi-use trail that spans the cities of Dublin to Concord. I’d never ridden this former railroad route in its entirety, and we were thankful that we didn’t have much climbing as we slow roasted in the unrelenting heat. (I’m pretty sure we were sweltering away in temperatures ranging between ’90’s-100’s at this point.) I was also on my Ebisu touring bike — which is built like a heavy tank — since my El Camino CX is out of commission at the moment due to ongoing fit problems that have been affecting my right knee. The Ebisu is a joy to ride, but due to its hefty weight, I won’t be breaking any land speed records on it. So slogging away on this bike felt even more arduous on the mostly flat, paved terrain of the Iron Horse Trail. It took all my willpower to not stop at this water park that we passed around high noon — the blistering apex of the summer sun — and I was getting a heat headache. TBO had his jersey unzipped and was looking fairly miserable, and others said they were getting goosebumps and chills. But we pressed on to our next control. A water park taunts us in the distance…

Time for BBQ! Sadly enough, I got a flat just as we rolled into the restaurant parking lot. I decided to skip lunch so we could hit the road as soon as my teammates were done chowing down.

But luck wasn’t on our side, and we had another mechanical delay due to the “Oh-Flatfields” (our new nickname courtesy of Chava.) Somehow a dozen tiny thorns had become embedded in TBO’s tires, so after he painstakingly picked them out — he had to repair his first flat. Soon afterwards, TBO got another flat and was now out of tubes — and there were just too many holes to patch. So he went on ahead to Benicia, the location of our next control, to find a bike shop. He had to stop every quarter mile to pump up his slowly leaking tire — “I felt like I was trapped in some bad video game” — but he managed to meet us not too long after we arrived at our fourth control. Our super slooow control in Benicia

Now about 30 minutes behind, we took a little too much time at this control before hitting the road again. Fatigue was setting in, we were cooked from the heat and the service was unbelievably slow. So by the time I received a bagel to go and we hit the bathrooms, got drinks and saddled up again, we had lost about another half an hour.

So now it was time to haul some ass! We had about an hour and a half to make it to the finish by 6pm. But headwinds, hills and the heat put the kibosh our progress, so by the time we reached our second-to-last control, morale was low. The wastelands of Tormey TBO rushes in to get our receipt

We had been looking forward to kicking back here for a bit with some drinks before arriving at our final stop in Berkeley, especially since this was our “6-hour control”. There were no time constraints on the other controls, so you could check-in as early or late as you liked, but the rules stipulated that you couldn’t leave the 6-hour control until two hours before your official finish time. So we had hoped to bank some time early on, then relax with beers before moseying along at 4pm.

But as we arrived with no time to spare, TBO ran in, pounded a beer and came back with a receipt. (We knew he was the right guy for the job, as he had been dreaming about beer since Benicia.) Ellen decided to hang back at this point, so TBO, Jorge, Chava and myself forged on. But along San Pablo, the siren song of ice cream lured Jorge and Chava away and they stopped at a Frosty King near Richmond. TBO and I resolved to finish the route, even though chances were slim we’d finish in time. TBO gets our ATM receipt from our final control

After getting our proof of arrival from a local ATM, we pedaled as fast as we could towards Berkeley. It was fortunately much cooler, so we felt somewhat revived despite pushing through some nasty headwinds.

We arrived around 6:20pm, and since we were late and only a team of two (you need at least 3 folks to finish) — we officially DNF’ed. But we weren’t the only ones who weren’t able to complete the ride, as it seemed the heat and other woes claimed several other teams today. The rest of Team Rand-On showed up about 30 minutes later, and we joined the rest of the San Francisco Randonneurs for a well-earned feast of ribs, mac n’ cheese, fried chicken and other comfort food (and alcohol, lots of alcohol.)

While I haven’t been able to break my curse of team brevets yet — I’m now 0-2 — hopefully in the future, the third one will be a charm. Plus I have an even greater appreciation for time management and how important it is to just keep moving! So while I was disappointed that this one won’t count towards my R-12 (EDIT: turns out this would have only counted towards a P-12 as an R-12 needs to be 200k or longer), I had racked up at 85 miles by the time we rode home — and my right knee was pain-free for most of the day (hurray!)

Kudos to Chava, Ellen, Jorge for riding their first brevet; maybe they’ll get hooked and become randonnerds, too…!